We tell people all the time that NYC is a great place to live even when you’re broke, and never is that truer than in the summer, when the city splits open at the seams and releases everyone into the wide open. The almost nightly barrage of free movies, free concerts, cheap drinking spots and no-cost revelry makes you drunk on the idea that this is indeed the best city in the world, even if you don’t have a dime. And there’s seemingly more every year. Here, in honor of  today’s high temp, our top 88 reasons why summer belongs to brokesters:

1. On a scale of 1 to America, how free are all these summer concerts? Pretty damn free.

2. Then there are all the places you can sit to still hear the rich people — otherwise called “ticketed” — concerts.

3. Getting a suntan while enjoying Gowanus Yacht Club’s two cans for $5 ‘til 7pm, everyday.

4. Skinny jeans and gnarly beards are enough to win you discounts at the Brooklyn Cyclones’ Williamsburg Night.

5. And simply having blood means you can afford Mets tickets.

6. Habana Outpost, home of the best bathroom, one of the best yards, and hotspot for the most beautiful people in Brooklyn, hosts free outdoor movies every Sunday ‘til October.

7. A birthday party that’s fit for a king has a city-wide invite.

8. Naked bike riding. Naked book reading. Why do anything with clothes on?

10. There are endless couches to surf on when it’s too hot to bike your ass home.

12. The rules of restaurant ordering have flopped. The lightest options are not only the cheapest, they’re the coolest, probably the trendiest, and yeah, they look good on your beach bod.

13. As of 2012, there exists no cold weather equivalent to the musical phenomenom, known in the vernacular, as summer jamz.

15. In lieu of backyards trashed with empty beer cans, the gods of New York gave the brokester a thing called rooftop access. They might have even tossed in a broken fire escape, just to keep the fear of God alive in our inglorious hearts.

16. Street parties. You live in a city. You have lots of neighbors. You should get drunk with them.

17. Nothing is easier to pull off for cheap (without sacrificing class) than a picnic. You don’t have to worry about the shaky chairs-to-guests ratio. It’s like living in an Edith Wharton novel, but without all the sexual repression.

19. Hot dogs. They’re cheap, but does anyone actually crave them any other time of year?

20. Biking becomes the means, and the end, all at once. Instead of just the really freaking cold means to an end.

21. Outdoor seating pops up where you least expect it. Even the bodega down the block has a patio set-up.

22. Hanging in Greenwood Cemetery. As long as you’re cool with the undead, that place is awesome to wander through.

23. Walking around in a bathing suit 24/7 is not only socially acceptable, it’s forward-thinking.

26. The city is a movable feast of flesh. And after a whole five months only seeing fingertips, it’s no wonder everyone’s a hungry beast.

27. Winter is the time for looping the snooze button. In the summer, the heat basically throws you out of bed to make the most of the day.

28. But if you do happen to fall asleep in the middle of the day and wake up at 8 pm,  you’ve still got a good hour of daylight left.

29. West Coast baseball is free late-night entertainment: Wait until the Mets or (ugh) the Yankees are on a Left Coast swing, get you a jambox, some beers and a joint and and stay up late listening to the game, on the fire escape for maximum enjoyment.

30. The feeling, however unjustified, that every night is wide open for adventure because it’s hot and someone else out there in this great city must be as amped up as you.

31. Friends with gardens: they do all the work, you reap/eat all the delicious rewards.

33. Who wants to go outside for a smoke when its 96 degrees? NO ONE. The forebearance of heatstroke strengthens your lungs and your wallet. 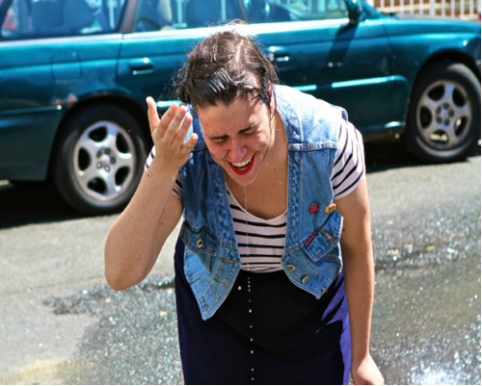 35. Don’t think we forgot about fire hydrants. All you have to do is find a sexy fireman and ask him to open one.

36. You can get “beach hair,” without the chemicals or pricey bottles.

37. Where’s there a sunset, there’s a rooftop film playing somewhere in front of it.

38. Learning what the hell Kubb is.

39. Cheap thrills are plentiful on the last bus back from Ripper’s in Rockaway Beach. It’s like a completely unsupervised, alcohol saturated, high school field trip. You know the kind.

40. Everyone’s got a summer soundtrack, and all you need to do to pirate it is open your window.

42. Hitting the playground fountains after the kids have gone home.

43. Public pools. They’re like The Sandlot, minus Wendy Peffercorn :(

45. Making new friends by hitching a ride to the beach.

46. Learning to tell the difference between gunshots and fireworks.

48. Popsicles cure your hangover. Or at least taste good enough to make you forget you have one for four minutes.

50. That feeling of amazement that none of your friends have ever fallen off a roof at a rooftop party.

51. Free kayaking, even if the thought of falling in to the East River prevents you from ever going.

54. The crab is all you can eat in Sheepshead Bay.

55. A little saltwater in your arm hair is all it takes to fake a fancy spa treatment.

56. Work breaks in the park. The only time the office will pay you to go tanning.

57. Speaking of tans, did you know that summer gives them out for free?

58. Chances are, you won’t be buying a bottle of aloe for a while. That stuff never runs out.

60. Free wifi in the parks means you’re saved from buying another stale muffin simply to stay in good graces with your Coffee Shop Council for Excommunicating.

61. Brown bag lunches are also best done outdoors, and reduces the lonely-guy-at-the-office vibe when hunched over at one’s desk.

62. Did you know that studies show that sweat boosts hormone levels? A 100-degree day might turn out to be the best wingman you’ve ever had.

63. Teachers join the ranks of the underemployed. If you’re inclined, you can turn your daytime drinking hour into a refresher course on Greek Classics.

64. Beer smuggling and guzzling go hand in hand at every outdoor event.

65. From this angle, facing the sun, “Tasti D-Lite” sort of looks like “Totally OK Dinner Option” to us.

66. Leftover pizza on the grill. It’s easier than the girls at band camp.

67. Something about burning more calories in the heat? Yeah, that.

68. But if you’re not down to perform an Olympian-caliber exercise routine when humidity’s at 99 percent, at least no one can judge you for it.

69. Movie theater A/C brings bang back to your buck. It’s even worth sitting through the occasional bad movie just to be blasted into a darker, comfier version of Antarctica (that was you, Prometheus).

70. The camping is cheap upstate. So is the bourbon.

71. Wedding season means about 12 weekends of open bars. Meaning it’s ok for everyone to be that girl who bursts into tears at the end of the night, yelling, “I just LOVE WEDDINGS. SO. MUCH.”

72. A bedroom fan doubles as white noise machine. Or muffler for all the summer sex you’re making.

73. Drugs are more fun in the sun. In parks. On trees. Under trees. You get the idea.

74. Getting caught without an umbrella in a downpour isn’t the worst thing to happen to you. On a good summer day, it’s the actual best.

75. Those 6am walks home from the party are a lot more sparkly and sweet in the summer. Until the sky explodes and out comes the angry sun from Super Mario 3.

76. You can mix whatever-the-hell ingredients you have lying around your fridge bottoms, and call it a “Summer Cocktail.” We’ve tried, but “Fall Cocktails” just don’t sound as good.

77. Renewing your sense of patriotism through your bodega beer can choice.

78. Book readings happen outside, so even the pasty bookworms among us can catch some rays.

79. Speaking of culture, your stoop  has some.

80. The satisfying sound of popping a Brooklyn Summer Ale with a lighter from your pocket.

81. Water got turned off in your apartment? Not like you had any chance of staying clean and dry today, anyway.

82. Finding the grassy spots where the fireflies live.

83. Because mini-brokesters can learn to swing a backhand, paddle a canoe, salute the sun and catch guppies for free.

84. A study shows that dates that occur outdoors have a greater chance of success, because, although flaws are more easily spotted in natural light, beer buzz sets in more quickly.

85. Another study has shown that the longer you go without using an air conditioner, the more superior you are physically, intellectually, morally, and all other ally’s. This study was conducted by you in your bed stuck to your sheets, at 2am.

86. It’s time for “summer reads.” Books which you’d never be seen reading anywhere but on a beach or poolside, in which case it’s acceptable to read absolutely the worst (best) books ever.

87. Wearing beach bottoms as your last-ditch underwear option makes you look prepared, even prophetic during the summer.

88. A broke-ass pizza-delivering baby-daddy named Mookie did right by his lady with a few well-placed ice cubes. Go fill that tray right now.