Fellow Americans, last summer represented a crucial moment in cheap beer marketing when Budweiser dominated the summer with the release of a genius AmeriCan design. Suddenly, we all were compelled to buy Budweiser for our BBQs and rooftop parties out of latent feelings of pride for all the great things we salute about ‘merica in the summer. But this year, Miller High Life is fighting back, entering the patriotic fray with its own version, giving us a truly democratic choice for red, white, blue and cheap beer.

Which means when you’re standing in front of the bodega cooler this summer debating which cheap beer to you’ll bring to that outdoor gathering, you’ll be faced with a crucial decision. When both cost roughly the same and taste roughly as terrible, which AmeriCan should you buy? Conal and Dave are here to argue on behalf o what they consider the True AmeriCan experience of summer 2012. Take it away, fellas:

Nothing says Budweiser more than “America.” So I was ecstatic last year when Budweiser graciously allowed our country’s flag to be draped over their fine product. In a brilliant marketing move, the ur-American beer company introduced the Ameri-Can to American beer shelves just in time for  Memorial Day. It brought even the most hardened anti-American macro-brew drinker to buy it just for the irony. But when they found it was actually potable, it remained the utility beer of the summer.

Naturally there were Negative Nancys and Fear-of-Change Freds. They said the Ameri-Can was a blatant appeal to mindless patriotism and a sick co-opting of our nation’s colors. I say, so what, terrorist? If it’s wrong to use the American flag to sell cheap beer, then that’s an America I don’t want to live in.

The 2012 reincarnation is a improvement on last year’s design. It’s less jumbled and wavy (though you still get that way after one too many). It has become an homage to decoupage; as if Henri Matisse was told to recreate the opening scene of Patton on an aluminum can, on acid.

In contrast, the Miller High Life can looks like Jasper Johns were locked in an airless cell with a case of PBR and told to re-create the flag of the Netherlands. Who are they marketing to? Dutch Hipsters? Budweiser’s design has such universal appeal, even Puerto Ricans, Ohioans and Texans could appreciate it. And don’t they deserve to feel a little more American?

Imagine a silken, sunny weekday, a “personal” day officially. You’re skipping work and meeting friends in the park; they ask you to bring beer. In the hard, fluorescent air of the corner bodega, only one thing catches your eye. Not the straight, ugly lines of the the watery champagne beer, but the confluence of red and white with an anchor of white and blue. Which one will the cute art major want you to show up with?

Anyone can slap the red, white, and blue on something; only Budweiser makes it its own. So this summer, when you’re watching the fireworks on an East River rooftop, drink a fifth out of an Ameri-Forty. Think of Budweiser. Think of America. Think of Djibouti, where there’s a Marine with a tear in his eye because he can’t drink on deployment.

Oh, and considering actually honoring veterans this Memorial Day. Maybe even donate the $10 you’d spend on sixpack to the USO.

Despite what some lunatics or HBO shows would have you believe, the youngs of Brooklyn that I know do a damn fine job representing America. Even if they aren’t looking for a house with a picket fence and two and a half kids, even if they want to marry someone of the same gender, they’re a hard-working lot that understand the value of hustle and sacrifice.

Of course, when they aren’t busy hustling, they’re busy drinking themselves into oblivion, especially in the summer. Last year, Budweiser won the summer (and made everyone forget it’s owned by Belgians) by introducing the Patriot Can and pulling at red, white and blue heartstrings across the country. Even if you’d normally bypass St. Louis’ second most popular export (number one: gonorrhea!), the striking decision to literally wrap the can in a flag turned your act of drinking until the sun came up into a salute to the Bill of Rights, baseball, Chevy and crying bald eagles.

But now a challenger has arrived in the form of Miller High Life’s way superior AmeriCan. How to choose between High Life AmeriCans or Budweiser Patriot Cans though? Certainly not for the taste, since, they’re both, to paraphrase David Roth, macro-brew fart seltzer that taste like lighter fluid mixed with mosquito repellent, that exist as garnish for shots of terrible whiskey. 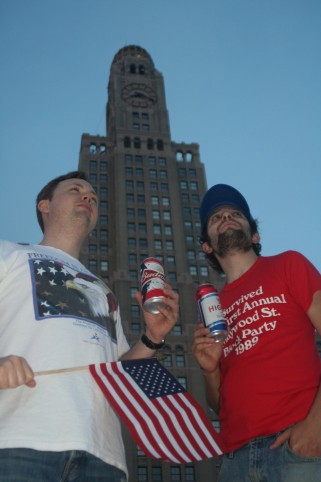 That means you have to go with design. Patriot Cans are for your grandfather, who, God bless him, never really learned about subtlety. And while Miller has definitely gone all out chasing that dollar before, this can represents a possible new marketing direction. These are cans that say “I like America, sure, but not in a ‘love or leave it’ way.” It’s about recognizing that America has faults but it’s still awesome, the same way that Kurt Vonnegut felt and Joe Biden feels.

All Budweiser did is wrap their can in the flag and call it a day. The can is usually red and white anyway, so how hard is it really to add a bit of blue and a couple stars? Miller, on the other hand, took a risk by removing all the colors that make you think of High Life. Sure, those colors are piss yellow and puke green, but the switch to a bright red base with solid blue and silver trim with a white face for the name pops out at you and conjures the feeling of running wild in the streets in jorts and beat-up Converse, headed to a rooftop BBQ with your bearded friends while Best Coast plays in the background. They even gave the Girl in the Moon a shirt with colors that a human being would actually wear.

Of course, who am I to say that High Life hasn’t been leading up to something like this for years? This is a beer whose tagline, “The champagne of beers” drips with more irony than calling The Room “the Crime and Punishment of comedies.” The Girl in the Moon? She listens to Hans Zimmer’s original score from True Romance, dresses like a twee pirate hooker, tries a little too hard to be meaningful and lives on the goddamn moon. Obviously she’s the original manic-pixie dream girl, your perfect American summer crush.

Which will you choose this summer? 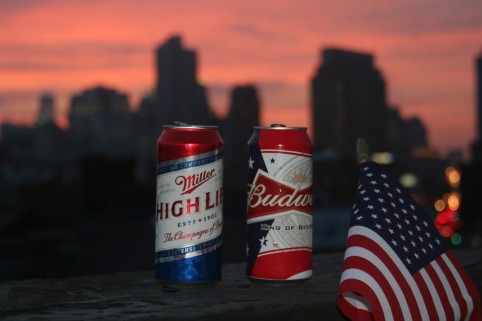 Argue on Twitter about who is the true American: @ConalDarcy or @HerbertHarper.