New York City’s comedy scene always offers you plenty of options, what with bar owners happy to take the dollars of depressed comedians AND their depressed fans in a night of humor. What the city’s comedy scene hasn’t offered you, until now, has been a chance to see some of the weirdest and funniest comedians in the city all coming together for a show in an abandoned car wash on Saturday. That chance is called Firestone Fest (as in Jo Firestone), and it’s bringing in names like Mara Wilson, Julio Torres, Joe Pera, Lorelei Ramirez, Naomi Ekperigin and the Cocoon Central Dance Team under one soapy roof for a 10-hour day of comedy. In an old Williamsburg car wash.

As you might have guessed by the name, the Firestone Fest is the brainchild of polite, pint-sized comic lunatic Jo Firestone. Having already made friends and admirers bringing you events like the Punderdome, a hastily assembled Beyonce musical and a comedy show that was purposefully designed to alienate you and you so mad you’d leave, it only makes sense she’d move into being a festival impresario as well. So, from 12pm to 10pm on Saturday, November 14, the Williamsburg Hand Car Wash and Detail Center is being turned into the best comedy club in New York.

And while the festival is being held at a car wash, you don’t have to worry about anyone driving in to you expecting to get a wax. Firestone told us that the car wash is now closed, and the people who own it are letting the space be used for parties and music and shows “before it turns into some crazy Williamsburg Urban Outfitters.” And since this is pre-Urban Outfitters transformation, you won’t be stuck drinking Tin Monkeys and Etsy Bitsy Biters, there’ll be regular alcohol out there for you. There’s also a schedule of events, if you’re trying to plan when to be there: 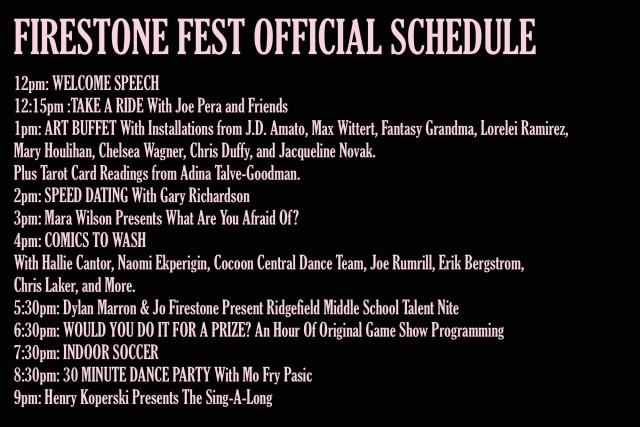 As you can see, Firestone Fest will have a little something for everyone. Mara Wilson will be holding her “comics talk about their fears” show What Are You Afraid Of?, Gary Richardson will be holding a speed dating session for any of you lovelorn comedy fans out there, and Joe Pera is promising to take you for a ride somewhere. Where to is uncertain, but Firestone did tell us that he’s borrowing a car from a friend. There is of course actual standup comedy, and while you won’t be able to eat anything at the promised art buffet, Max Wittert will draw your dream car for you and Chris Duffy will give you a tour of the car wash. There’s also the soccer game, which should be more fun that competitive, judging by Firestone telling us that “if you have a child’s soccer playing ability, you should be okay.” All that and more for just $20 (which is $2 per hour of comedy if you want to break it down that way) could be yours, provided you buy tickets before there are none left. So go, get one.