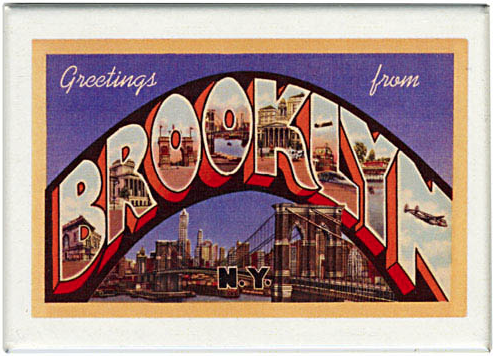 So your ex-boyfriend is coming to visit you in Brooklyn for a two-week trial period to “see if he could see himself actually living here” and while you believe it’s impossible to for him to really know in such a short, pressure-cooker of a visit, you miss him and you want him to move here, so you’re entertaining the idea that this trip could seal the deal.

You two dated three years — two spent together in New Orleans, one apart when you moved to New York — until the distance became too much and you had to break up. But it turns out you still care about each other and most of your problems resulted from being apart. You both are working off the premise he’s just not that into New York, but definitely still into you. So what makes up the perfect sales pitch?  He’s from New Jersey, (please, he knows what New York is like, he doesn’t need to try it on) but “found himself” in New Orleans — where you were born and raised — one among so many Northeast transplants who moved down to do post-Katrina relief work and became born-again Yats. Some days he annoyed the piss out of you with their green (in both senses of the word) enthusiasm; other days you envied the way he magically became enchanted with your city, whereas for you, so much of it became old, waterlogged news, and you were drowning.

You needed to grow up. But it’s hard to break the spell. In New Orleans, he currently rents a two-bedroom with his best friend for $500/each, inside a compound that boasts a swimming pool, tennis court and football field-sized lawn. Beer costs $1.50, and dive bars are authentically that way, as opposed to here, where they’re curated like a pair of scuffed-up jeans in an Anthropologie display window.

Dudes roast pigs and boil crawfish and shuck oysters because they grew up doing it, not because the burgeoning twee movement provides a safe space for them to role-play masculinity. There, you can sit on the banks of the bayou at dusk and enjoy a glass of wine, your car parked right across the street (in one of five open spaces) your dog sitting next to you, maybe leashed, maybe not, but free to wander down to the water or maybe run up on a group of idling ibis; in short, the cops won’t slap a ticket across your ass just for breathing. You still shit on New York, in your mind, when you compare it to New Orleans, your first love. But it’s first love in the way your mother is and you have to wean yourself off her someday.

Here, you’ve made new friends, explored new neighborhoods, begun to understand how people live in another part of the country. You write for a cool blog and your resume is slowly stacking up with name-brand publications. There, 200 journalists lost their jobs after the daily paper went part-time, and you can count the other writing outlets on one hand.

In your opinion, he needs to grow up too. A bunch of his friends have left New Orleans, off to grad school or better job opportunities on the east or west coast. He just quit his job of three years and took the LSAT, idly pondering law school while working odd jobs to break even. There are plenty of schools and odd jobs up here! And not-so-odd ones too; he’s unequivocally in his late twenties now. Maybe it’s time to start gathering twigs for that nest?

During past visits, you’ve fed him soup dumplings from Joe’s Ginger, $3 falafel sandwiches from Oasis, slices from this random spot on Delancey and Attorney that just might rival those from his beloved hometown pizzeria. You’ve wandered through Prospect Park with the dog, traipsed across bridges, spent a weekend in a cabin in the Adirondacks in early fall, when the leaves were just starting to change.
Over the past year, you’ve made sure to call him not to complain about how poor and dejected you are (okay, sometimes you did) but only when things are good, when you’ve just had sooo much fun, for free: “I just saw Do the Right Thing projected outside in the courtyard of this super cool Cuban restaurant, you would have loved it” or “I just saw Jimmy Cliff in Prospect Park” or “My friends and I spent all day at Fort Tilden, it turns out the Atlantic has better waves than the Gulf and it’s only an hour away! Isn’t it amazing the beach is only an hour away?”
For these two weeks he’s visiting, you’re planning: a day trip to the beach, maybe as far as Montauk, if you can inspire him to seek out the end. You want to take him to the transit museum, in hopes it’ll make the subway seem romantic. The Tortilleria Mexicana off the Jefferson stop in Bushwick, because they make their own tortillas! (And if he ever moves here, that’s a neighborhood you guys could maybe afford.) Shake Shack at night in Madison Square Park, with the lights strung above your heads. Maybe one day you’ll wake up and go kayaking for free on the Hudson River.
You’ll make sure to show him old-school, immigrant Brooklyn — Di Faro’s Pizza, Randazzo’s — look at the history here! It’s not all hipster transplants, you swear! You’ll take him to Brighton Beach, where you’ll name drop Jonathan Ames (and he won’t be impressed) and you’ll sit outside at a bar on the boardwalk, and when you order “Russian beer” off the menu, the waitress will ask you, “Which kind you want? We have the 3, 5, 7 and the 9,” and you’ll ask him if he can guess what the numbers signify (alcohol percentages, you learned from a previous trip).

And you’ll write a blog post asking everyone if they know any surefire lures that’ll make a man bite down and never let go. The transitive property doesn’t necessarily apply here: if he loves you, and you love Brooklyn, that doesn’t mean he has to love Brooklyn too. And if you can’t convince him to stay, well, at least New Orleans is a place you’ll always want to visit.

The F Train: He’s potty training his pussy in Park Slope and it stinks

Would you stay with a man even if he tried to potty train his cat and thus rendered his bathroom unusable?

The F Train: How do I coordinate sex when my BF has a way different work schedule?

How do you figure out sex with bae when you work way different schedules?