The F train is Brokelyn’s new advice column for all you sensual New Yorkers who, like the F train, often have schedule changes in how frequently you come, struggle to get into the station or suffer from any other number of delays and track work. Think of this like the MTA Twitter but instead of public transit info we answer sex queries – send yours to [email protected] and let us know what neighborhood you’re in so we can make a sex pun out of it.

I’m recently out of a serious, long-term relationship and have been dating a former flame for a few months. We have never been serious/committed, but it’s starting to feel like it may be headed in that direction. He’s really sweet and funny, but I’m not sure I can get over how he “parents” his cat. He didn’t have a cat the first time we were hooking up, so this has been a new adjustment. The cat is nice enough, but the guy is trying to potty train him…on the human toilet, Meet the Parents style.

This would be fine if it were as good in practice as it sounds in theory. The reality of it is that there’s a weird tray thing that is placed under the toilet seat covered in a thin layer of cat litter. I guess the ultimate goal is to remove the tray and the cat will just know to go in the toilet, but as it is right now the cat just creates a huge mess. Not only is it gross to have to precariously move this tray of litter (and typically waste that hasn’t fallen into the toilet yet) every time I have to pee, but the seat ends up being covered in litter and it looks so gross that I don’t want to sit on it unless I take a roll of paper towels and bottle of Lysol to it! I’m at the point where I consider risking a UTI after we’ve done the deed just to avoid using his gross bathroom! Do I just start to carry cleaning supplies in my morning-after kit or should I ditch this guy??

Sincerely, Fed Up With Pussy in Park Slope 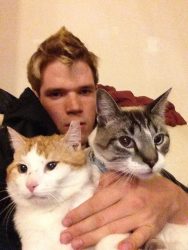 Dear It’s Me or the Cat,

So let’s step way back for a quick minute. You say you just got out of a serious relationship?  Honestly, the cat poop sounds like you are giving yourself an out for this potentially new serious relationship. You said the relationship feels as if it is moving toward being a serious/committed thing, and after getting out of a long-term relationship that is an easy habit to fall back into, but is that something you really want at this moment in your life? Or are you filling a void that you are afraid won’t fill itself on its own? The feeling of loneliness is often stronger than the feeling of heartbreak. Now, I don’t know anything about your past relationship or why you two broke it off. But ask yourself, why did this relationship end? Do you need time to yourself? Is your life sort of in flux at the moment?

Of course, I could be dead wrong. Your ex could have been dead weight for the latter part of your relationship giving you ample time to stop, reset and move on, before even physically moving on. As Jay Z would say, “on to the next one.” But as an outsider, the timing of this situation sounds a little off and a little convenient.

If this is something you really do want, a new committed relationship with a former flame, you have to remind yourself constantly, this relationship will be NOTHING like your old relationship, cat parenting skills and all. You need to be able to distance yourself from your past relationship so you don’t fall into expected norms that feel comfortable because they are what you were used to from your past partner for so long.

Onto communication. You say you feel as if this is moving into something more serious, but have the two you talked about it? Why not get straight to the point. Same with the toilet litter box. You are 100% allowed to be grossed out by a cat litter tray strapped inches below in the only toilet you can pee into. And you are absolutely allowed to tell your new beau that this grosses you out. Ask him, “What’s the deal man?!” Ask him, how long he plans on doing this for. Ask him, why? Ask him how you two can make it a little easier for a lady to pop a squat post coitus. Ask, will he pay for the antibiotics if you get a UTI from forgoing the bathroom? ASK HIM. ASK HIM. ASK HIM. And answer his questions, you know he’s got some.

If the Meet The Parents style is really a deal breaker for you, even though you know it’s only temporary, then you know the answer: you gotta step back from this guy for a bit. And probably all guys. I doubt he’s getting rid of the cat anytime soon. But I also doubt the toilet cat litter box is staying around forever. And hey, if you end up with this guy for a long time, how great will it be that you don’t have to pick up this cat’s shit. Cause oh my god… cat shit is the worst smell.

So… Stop. Move the litter box. Pee. Move the litter box back to its original place. Wash hands. Go back to bed. TALK. We automatically assume the other person knows what we are thinking. But they don’t! You gotta speak up. Say your grievances and concerns. And if it can be resolved, great! If not, you know your deal breakers and walk away. And yes, cat poop in the toilet is absolutely allowed to be a deal breaker.

This post has been edited and updated, originally published in 2017.

The F Train: How do I coordinate sex when my BF has a way different work schedule?

How do you figure out sex with bae when you work way different schedules?