Subway riders know best that there are plenty of complaints that you can lodge toward the MTA, but Governor Cuomo, who for all intents and purposes controls the public corporation, called the MTA a “disgrace to New York state” yesterday during a speech at the real-estate industry-financed Association for a Better New York.

While anyone stuck on a musty petroleum-scented L train might share the same thoughts, Cuomo threw some seriously petty shade, when of-all-things, he criticized MTA workers for cleaning the subway with Tide:

“What product did they pick? Tide. Yes, the same Tide detergent you use at home to wash your clothes. If it’s got to be clean its got to be Tide. Why did they choose Tide? Because it smells nice. The problem is the subway stations stink, that’s the problem.”

Armed with a snarky powerpoint presentation Cuomo was just getting warmed up and he even said that NYC should take away control of the subway from the state.

Politico cleared up the backstory on the Tide-rade (get it?):

Most people in the audience were probably unaware of the apparent backstory. But Cuomo seemed to be alluding to a dispute between union workers and the MTA over how they should carry out a Cuomo-ordained station cleaning initiative. Ultimately, despite employing thousands of its own workers, the MTA decided to use outside contractors for the special cleaning effort, enraging the union that represents authority laborers and sparking complaints about wasteful spending.

Eventually, the blame from Cuomo was pinned to the MTA board, who appear as though they average maybe three subway rides per year as a whole (pic below).

And then there was the MTA board. Cuomo appoints its chair and controls a plurality of its votes, but other elected officials get to recommend appointments, too. It is hard to come up with examples of the board defying the governor’s will. But the governor likes to depict the board as unruly.

“A more functional board would be President Trump, Hillary Clinton, Bernie Sanders, Rush Limbaugh and Nancy Pelosi,” Cuomo said, their photos also flashing onto the screen. The MTA board is, he said, “a governmental Frankenstein.” 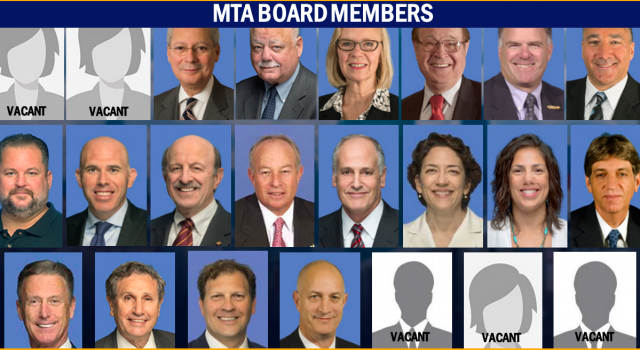