It’s an inescapable fact that free things to do are just a little harder to find in the colder than the warmer months. We inevitably end up having to plump for more paid events, relying hopefully on the prospect of impending gainful employment and the spoils of nuisance lawsuits because heaven forbid we can be at peace with staying in.

One of the most enjoyable ways to entertain yourself with minimal cash is to catch a great movie with your friends but at a time of year when sitting on a blanket will get you nothing but a frozen tucchus and prime candidacy for a kidney infection what are the feasible options? Well come in from the cold, dear compatriots, pull up a stool while cradling a drink and something tasty and feast your eyes on the following options: 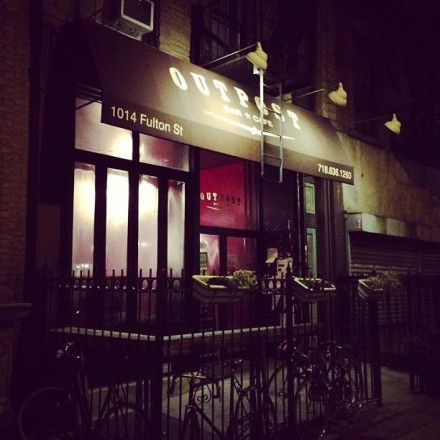 Come in from the cold at the confluence of Clinton Hill, Prospect Heights, Bed-Stuy, and Crown Heights every Thursday, find yourself a good sightline and celebrate the fact that it’s nearly Friday again with one of the beers on tap. Domestics like Narragansett go for just $4 and crafts and imports are only slightly more at $5-$7. A schedule for screenings is unfortunately not maintained but the always friendly staff are contactable at (718) 636-1260 or better yet, drop in during the week and sample a delicious coffee and pastry and ask someone in person. 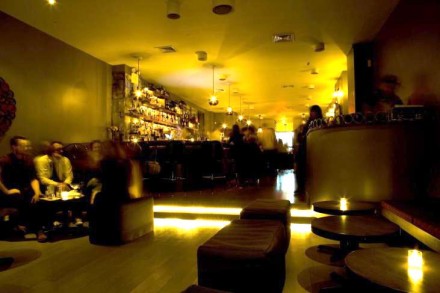 Huckleberry takes their movie series seriously, considering they stick with a theme every month. Last month, befitting Valentine’s Day, was Romantical Comedy. March is Tarantino Month. Tonight they’ll be showing Resevoir Dogs followed by the hyper violent and grammatically suspect Inglorious Basterds the next week. A fun one for you and your friends or paramours but potentially barren hunting grounds for you fellas looking to pick someone up via your shared tastes. But cheer up lonely-hearts! If you sign up for their free Movie Membership you get 2 for 1 beers and free popcorn. A free drink and a savory snack can go a long way towards reopening a window of opportunity that blood splattering on the the camera to a hip soundtrack would otherwise close. 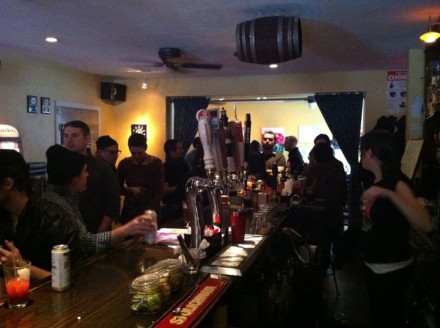 A convivial atmosphere typifies the long room that houses this favoured neighbourhood watering-hole, get in early for the 4pm-8pm happy hour ($1 off drafts and $3 wells) and one of the best seats in the house before they roll down the big screen at 9pm and distract you from the harsh realities of midweek with a free movie and $4 Harpoon drafts, FREE POPCORN and giveaways from Videology. Screenings are announced via the bulletin board each week; all the more reason to drop in on another night, sample the atmosphere and plan a bargain basement movie night. 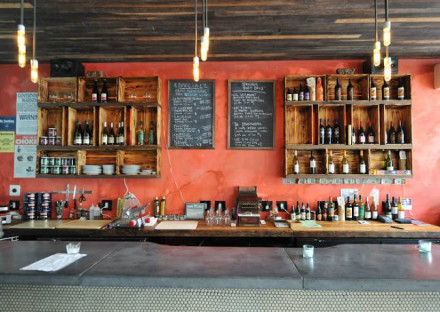 So many reasons to visit the Bodega Bar. First up, we freaking love it and when has Brokelyn ever steered you wrong? As it turns out, Tuesday night may just now be the most romantic night of the week as you and your date/WB can curl up to a free movie shown at 10pm while you sample wine on tap (or in the more old fashioned by-the glass/bottle method if you’re so inclined.) There is an Oscar focus at the moment; last week featured Beasts of the Southern Wild while the 2/19 screening will be Life of PI. Updates appear weekly in the Tuesday Movies section of the Bodega’s website. 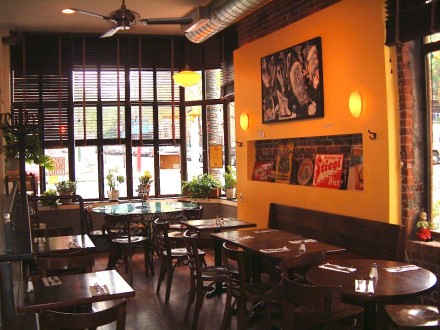 Steinhof cannot be recommended highly enough as your go-to refuge for the conclusion of the weekend. Get in out of the cold and fill yourself with the finest Austrian Comfort Food in the neighborhood and throw caution to the resumption of your work-week/desperate freelancing by sticking around for the movie night at 10:30pm. Recent screenings have included the Rick Moranis heavy-hitter Strange Brew and go-to Sunday movie West Side Story.

Blow out the cobwebs before they have a chance to settle. Every Monday after trivia (which starts around 8pm if you’re so inclined) Boulevard rolls down the big screen to show some gems and howlers from the canon of movies about rock stars. Recent screenings have included Ramones: RAW and AC/DC’s ferocious Let There be Rock so all tastes are catered for. Speaking of catering, the kitchen isn’t open Monday nights but, ask the bar staff for recommendations and they’ll hand you a dossier of menus from nearby eateries the deliver to the bar that’s thicker than the PATRIOT Act and at least twice as delicious. 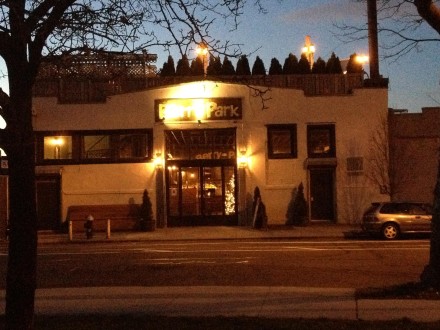 Movies can be appreciated on a lot of levels. Great acting, beautiful cinematography and a pitch-perfect soundtrack can all combine to make a film memorable and inspire dozens more like it through the years. Or you can have a pitch-perfect Nic Cage freakout like this and know (or sometimes not know) that you’ve got a movie people will laugh at over and over again through the years. Bad Movie Brooklyn, which sets up shop at Berry Park the second Tuesday of every month, works off of the latter. Their inaugural effort was Vampire’s Kiss, and their effort this month will tie into March’s most beloved holiday, as they’ll be screening Leprechaun In The Hood.

Probably one of Williamsburg’s worst kept secrets at this point but for the sheer volume of events that take place here on a weekly basis it’s worth keeping Videology at the forefront of your mind if you want to go and see something awesome and for very cheap/free. On the night before Valentine’s they had the presence of mind to screen True Romance, they also feature movie trivia nights, as well as themed “Bingo” nights (notable examples include the recent Wes Anderson & Twin Peaks bingo nights, the latter of which recurs approximately weekly according to their most up to date calendar) You can also get yourself a Bud for $3 and while popcorn isn’t free, you can be rest assured that the Videology crew take their salted air SERIOUSLY. 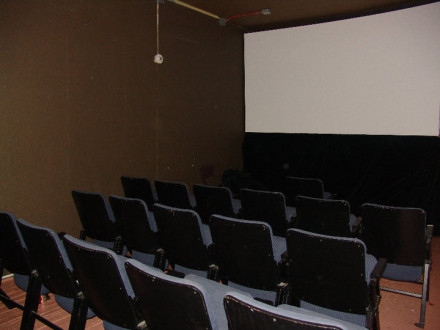 While not necessarily free (all events are $5 unless specified as free on the calendar) your price of admission at the entirely volunteer run Spectacle Theater gets you access to “. . . overlooked works, offbeat gems, contemporary art, radical polemics, live performance and more.” So while you can chill in a bar watching classics and guilty pleasures from the recent and not so recent past, Spectacle furnishes you with the opportunity to see something unique without having to go all the way across the river to pay twice as much to see something far stuffier in Film Forum.