WELP our dystopian nightmare has entered the “conspiracy theories about Halloween decorations at Roberta’s” stage, so it doesn’t look like things are getting better anytime soon. We’ve been tracking lots of ways to join the resistance, from volunteer opportunities and bystander intervention training to being a DIY graffiti vigilante and attending a 31-hour anti-Trump comedy marathon. We’re just going to keep listing events and other opportunities here: If you know of any we should add, email tim[at]brokelyn.com or tell us in the comments.

It’s an evening of life music, dancing, cheap drinks and prizes, with all proceeds going to Planned Parenthood and the ACLU. You can win a slot in the live band karaoke to be accompanied by the house band Holly & the Jollies ($3 per entry, no limit). The event also features performances by Beccs & Enid.

This event is not directly Trump-related … oh wait everything is Trump related now! lol rip us. This is a “night of live music and words by indigenous artists and allies.” Proceeds will go directly to Standing Rock Medic & Healer Council, a collaborative effort of volunteer medics, physicians, and other healers available to the water protectors in the face of police brutality. Featured artists include OSHUN, Bunny Michael, Professor Caveman, Laura Ortman, Esoteric Ayanna and Benjamin Lundberg. 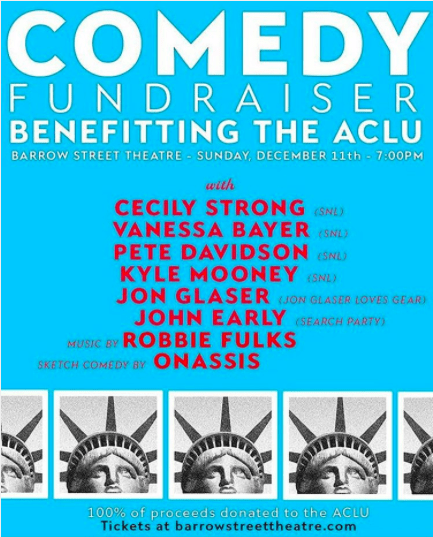 This fundraiser features an all-star lineup of comedians including SNL’s Cecily Strong, Vanessa Bayer, Pete Davidson and Kyle Mooney; Jon Glaser and John Early (of TBS’s Great Search Party), with music by Robbie Fulks and sketch comedy by Onassis. The event boasts “Amy Schumer has already donated to this event!” 100 percent of the proceeds go to the ACLU.

Housing Works is hosting this marathon-style reading of responses by and for artists and arts organizers. The event will benefit Housing Works, which is gearing up to provide crucial support to HIV and AIDS patients in the event the Affordable Care Act is repealed. The event is hosted by Housing Works, The Creative Independent, Well-Read Black Girl Book Club, Hyperallergic, BOMB Magazine, Lenny Letter, WEIRD SISTER, The Atlas Review and VIDA: Women in Literary Arts. See the full list of planned readers here.

Trump is planning a press conference for this day to announce he’s severing ties with his businesses, which almost certainly is not going to actually happen. Organizers are planning to protest the event; the time and location have yet to be announced. The electoral college votes a few days later on Dec. 19, just fyi.

This rally and march up Fifth Avenue to Trump Tower will highlight the need to defend and protect LGBTQ rights and freedoms in the shadow of the potentially dangerous Trump/Pence administration. All LGBTQ allies welcome. Performances by D.milk and his collective FREETHE + Aaron Paul..

Get on a bus to the march in Washington

A group of Bushwick activists are organizing a bus trip to the Women’s March on Washington planned for Jan. 21, the day after the inauguration. The cost is $75 roundtrip (includes tips for drivers), and seats are filling up fast.

Giving a bunch of crap made of plastic that will get thrown away in a week seems particularly egregious this holiday season, so consider giving the gift of doing some good in the world this year. Over at Gothamist, Rebecca “World’s Only Millennial” Fishbein has compiled a list of socially conscious gifts you can give to the activist in your life this holiday season if you want to help out some Santa causes this year.