Among the many tragic things to consider about a Donald Trump presidency is just how humorless and dour it’s going to be. After eight years of Obama earning the title as the first alt-comedy president with appearances on Between Two Ferns, a bunch of viral videos and a literal mic-dropping White House Correspondents Dinner, the thought of a guy who’s hiring white supremacists to help run the country trying to crack a joke just adds a whole new level of depression to an already droopy outlook. It’s enough to make you want to lock yourself in an underground comedy bunker for the duration of the presidency.

That’s the idea (sort of) behind the Fuck Donald Trump comedy marathon coming to the Experiment Comedy Gallery in Williamsburg a week before the inauguration. It’s a 31.5 hour all-night-all-day event meant to entertain, provide some relief and group therapy, and to help raise money for groups that will be crucial fighting for justice in the coming years. And to needle the future president a little.

“To me, Donald Trump has no sense of humor,” organizer Mo Fathelbab told us. “The guy has thin skin. This is aimed solely at just mocking him. [It] gives me great pleasure as a Muslim-American to stick it to this dude that hates us.”

The marathon will consist of a slew of different performers, shows and comedians starting Friday, Jan. 13 at 6pm. The idea just came together three days ago, and acts for the event are still being assembled, but Fathelbab said it will showcase a wide variety of comedic performers and styles, similar to the Upright Citizens Brigade’s annual Del Close Marathon.

Performers so far include comedian Anya Volz, who is organizing a sleepover show, Natalie Wall’s Awkward Sex and the City, Jeremy Hammond from The Hard Times (aka the punk rock Onion), Latino comedy showcase “Carajoland” hosted by Zilla Vodnas and Benel Germosen, and Brokelyn’s own Bobby Hankinson hosting a brunch version of his Kweendom show (If you’re interested in performing, email [email protected]).

“My feeling is that comedy done right is subversive,” Fathelbab said. “It’s a deconstructive way of sticking it to the man.” 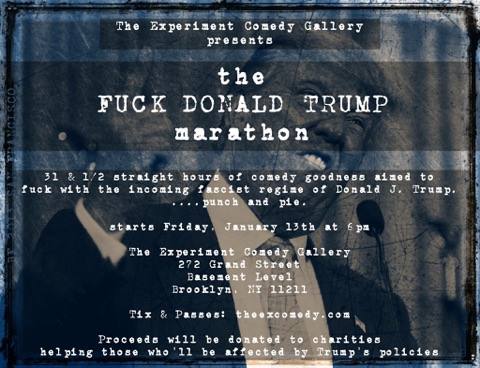 Passes for the whole marathon will cost $40, and individual shows will be $10 at the door. The money raised will go to the Center for Reproductive Rights, the International Refugee Assistance Project and The Trevor Project. The venue will also host cop-watch training and seminars for activists protesting Donald Trump.

After the marathon (and after a long nap, we presume), the Experiment plans to keep up the fight by producing parody Trump TV videos mocking the point of view of the new administration.

“It’s our version of The Colbert Report but with Donald Trump played by a brown man in white-and-orange face.”

The Experiment, if you recall, is the same comedy club that since December has been running a “Donald Trump special” where Muslims get in free. Fathelbab had hoped to end that promotion after this election, “but nope, that’s gonna go on for the next four years or at least until he’s impeached.”

In that case, it would switch to a President Mike Pence special where LGBTQ people get in free.

“It’s like a Baskin Robbins of hate,” he said.

The Experiment Comedy Gallery is located at 272 Grand St. in Williamsburg. The Fuck Donald Trump Marathon starts Jan. 13 at 6pm.

Follow Tim for at least 31.5 hours of tweets: @timdonnelly.