Mayors: they’re just like us! Or at least Mayor Tall was yesterday, in the sense that he relied on the subway to get to an important engagement and was late because of it. We wouldn’t know this except that the mayor accidentally copied the New York Times on an angry email to his staff where he complained about that, “We waited 20 mins for an express only to hear there were major delays.”

While I’m usually one to point and laugh at something like this, I’m somewhat of an expert at going down into the subway with no time allotted for a delay, hoping against all reason the trains won’t be delayed, and then of course being late. I’ve developed some coping mechanisms while waiting for the train that I’ll gladly share with the mayor so that the next time the subway screws him over, he’ll be less of a big tall stress ball.

• Bring printed matter with you
I can’t stress this enough, because bringing a book or magazine with you when you leave your home or office is the number one way to combat subway boredom. I finished Infinite Jest in a matter of months thanks to reading it almost exclusively on a commute from Bushwick to Cobble Hill that involved waiting for delayed L and G trains. Now I’m a person who can say I finished Infinite Jest instead of saying I’m a person who got a subway stress-induced ulcer! There must be some good stuff you can grab while leaving City Hall or Gracie Mansion.

• Wander around the platform
You’ve gotta keep those energy levels up, and you’re not gonna do that by sitting on a bench or leaning against the wall. Do a lap or two around the platform (and don’t worry, you’ll have time because the train isn’t coming).

• Play “Spot the Rat”
The best part about “Spot the Rat” is that you can play alone or with friends. Just watch the tracks and you’re almost guaranteed to have the chance to point down to them and say, “Oh hey, there’s a rat.” That’s all the game involves, but sometimes it expands a bit and you see rats fighting. There’s no keeping score and you can play as long as you’re waiting for the train, which might be a while.

• Find something to Instagram for when you finally get above ground
There’s no better time to indulge your eye for amateur photography than when you’re stuck underground and have no control of the situation. Look around the platform, there’s probably some cool old tile work or an ad someone defaced in a funny way (don’t show it to Bratton) or something that just screams, “NEW YORK.” Look what I found the other day while waiting for a 6 train that hadn’t shown up: 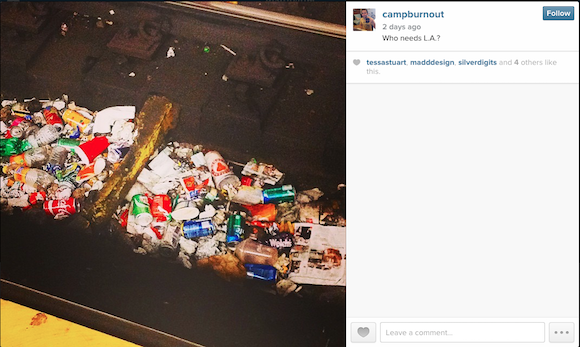 7 likes! Pretty good for a picture of a pile of trash.

• Stare down the tunnel, think about your regrets
Some people stare into the subway tunnel trying to get the train to show up just by willing it into existence. This is a fool’s game. If you’re going to stare into the inky blackness of an empty subway tunnel, think about the mistakes in your life that led you to desperately, sweatily waiting for a train that you just don’t know the location of. Maybe you should have gone to law school like your grandmother always said or maybe you should have just kept working at the lumberyard and never left your hometown. God, why did you even run for mayor? Everyone hates you all the time and it’s definitely not gonna help you be president. The emptiness of the subway tunnel will reveal to you the emptiness of your life, which is a much bigger deal than a train being a few or 20 minutes late.

• Figure out where the doors are going to open
This is important. The longer you wait for the train, the more the platform will fill up with people just as impatient to get on the train as you are. Good thing you know how to approximate where the doors are going to open when the train pulls into the station: look for the gum splats on the floor, which coincide with the place straphangers spit out there gum right before they’ve entered or exited a train. With this life hack, you’ll definitely get on the train and you might even be fast enough to get a seat.

• Practice your “My god, can you believe this fuckin’ subway?” story
When the subway finally comes and when it finally gets you to where you’re going, you’re probably about to see someone who’s annoyed with your or even angry. Make your story about blaming the subway casual and not rehearsed, but definitely don’t just blurt out “But the subway!” Your play for some sympathy has to be specific, so latch on to any common thread. “Oh man, you know the goddamn C. I couldn’t believe it, I mean I know it’s usually fucked but this time I was waiting for FIFTEEN minutes. Can you believe that?” Since the train isn’t coming anytime soon, if ever, you’ll have plenty of time to figure out what and how you want to say something that will make your intended audience think it could have just as easily happened to them.