You might first look at this video of rats fighting in the subway tracks in Chinatown and think “Ew, rats, I can’t watch this.” Please do watch it though, because it’s the perfect allegory for the human condition, especially here in New York. One rat is a longtime native of his patch of subway track, defending it from the encroaching other who he thinks will bring weird changes and force him out of his sweet garbage pile. The other rat is young and just trying to make it in this crazy urban jungle and thought he found a pretty good deal. He isn’t gonna just walk away because he’s catching some shit from an older rat.

And as they fight and argue on the tracks of the subway to the strains of ethnic music, both rats are so enthralled with their fight that they can’t even think to look around them, at the dangerous ground they tussle over. They fight and fight, only to be minutes away from being ground up by a hyper-efficient capitalist machine rumbling over and crushing them, ferrying a species with no interest in a sticking around and putting down roots in garbage pile, just moving on to the next place the machine will take them. Both rats, vanished in an instant, with no record of their existence except this one grainy YouTube video. 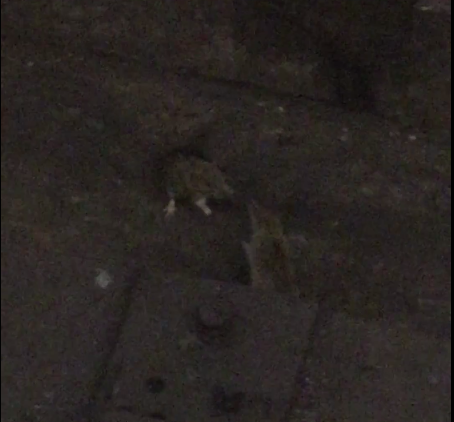