As all you 90s kids out there know, Netflix is reviving/rebooting/sequelizing Full House, because 90s kids love the slow comforting death of nostalgia. Some of you out there are probably already chomping at the bit for Fuller House, and while we can’t get Netflix to work on it any faster, we can help you a little bit. Next Friday at Videology, a crew of comedians will be performing an “unauthorized” stage reading of a Fuller House script, with the twist is that the show is now about Kimmy and DJ being a pair of casino-robbing bandits on the run from the law.

The unauthorized Fuller House script is the brainchild of comedian Mike Camerlengo, who hosts a late night show at the bar and let us know that the script comes from a place of love, as he was a fan of Full House growing up. While he’s interested to see what the sequel/reboot looks like, he has some doubts about Netflix’s ability to pull this off, since according to him, any streaming service that doesn’t have the O.C. isn’t one that can be fully trusted.

He also “wanted to take that feeling of love for these familiar characters and see what it would look like present day if things didn’t go according to plan.” So to that end, Camerlengo is bringing a team of comedians like Jermaine Fowler, Jennifer Bartels and Abbi Crutchfield in to Videology on Friday, May 1 at 11pm to tell the dark ‘n’ gritty story of the modern day Tanner clan and their friends. Camerlengo told us to expect “some of the heartfelt moments of the show mixed with some adult themes and several F bombs,” a juggling act he’s seemed to master, judging by a pice of the script that he shared on Twitter: 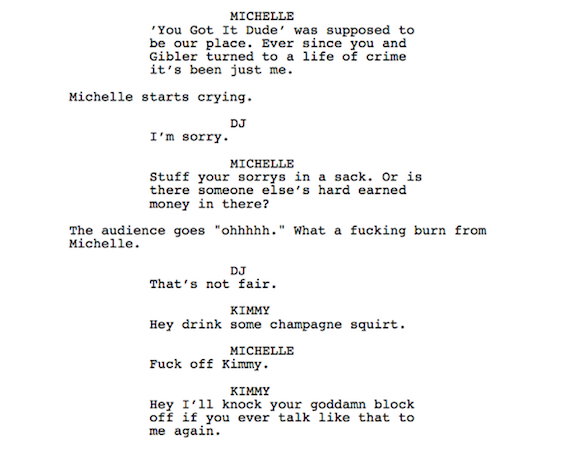 According to Camerlengo, in this Full House universe, Kimmy and DJ have taken to robbing casinos for money, Michelle runs a coffee shop called You Got It Dude, Rebecca is a detective at a local precinct and Uncle Jesse has a t-shirt app he’s trying to launch called Shallow V. Rebecca and Jesse are also separated, because in a world where Michelle tells Kimmy Gibbler to fuck off, how can something like love even exist. Camerlengo told us that while Danny and Joey aren’t in this episode, he could “see Joey getting in trouble on Twitter for an ill-timed ‘Cut it out,'” in a future episode if Netflix picks up his version of Fuller House.

It all sounds kinda depressing, but then again, more fitting for a TV universe that has given us anti-hero-heavy shows like The Shield, Breaking Bad, 24 and Low Winter Sun. To provide continuity though, the night is going to open with a screening of the series finale of Full House, so you can spend a little bit of time in a sunnier TV universe before seeing one man’s vision for how the new series should go. And should Netflix take notice? Camerlengo has a message for them:

“If you’re interested in seeing Michelle try and elbow drop Kimmy while DJ plots the next heist then I’m your guy.”