It’s been three months since the election and we’ll still probably never get used to seeing the occasional Make America Great Again hat on the subway. Its presence seems like a glitch or a fleck of dirt on your laptop screen you keep trying to rub away. Greenpoint in particular is not exactly a hotbed of Trump support, but if you do see any Trump-boosting clothing, you can take pleasure in knowing they might be very dirty.

Greenpoint’s joke-loving, pinball-obsessed Sunshine Laundromat has posted the above sign, which I spotted last night, pledging to add a 100 percent surcharge on any laundry containing the Trump name, and donate an equal amount to the American Society for Muslim Advancement. This sign is more joke than threat: it’s doubtful any Trump fans are coming into the pinball speakeasy laundromat in Greenpoint, or if this would actually even be legal (and there are lots of other laundromats nearby anyway). But it’s a further sign of where we’re at as a country: first the bars revolted, then the bodegas took to the streets, then the restaurants took a stand, and now the laundromats are joining in. Nutcracker Salesman Against Trump can’t be far behind.

Sunshine, which added a truly awesome pinball speakeasy in the back room last year, making it the best laundromat in all of New York City, is known for its sense of humor as much as its laundering services. The store is filled with goofy signs advertising “vegetarian washing machines and vegan dryers” and they added Plan B to their vending machine last year (which they said was not a political statement; Sam said it should have been).

On Black Friday, those items were on sale: 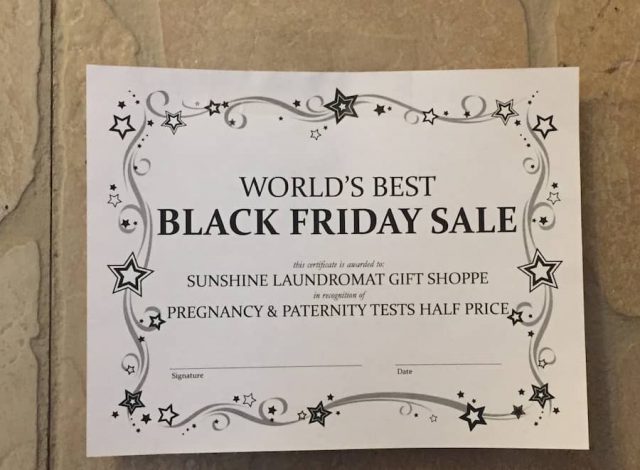 Now in that vending machine, you can grab a paternity test (and a $2 refund):

So perhaps other laundromats will join in and Trump supporters in Brooklyn will be shunned into a life of unclean clothes and grease-stained MAGA hats until they get the message that they both literally and figuratively stink. But of course what is detergent but laundry science, and what is science but a conspiracy of know-it-all coastal elites who are out of touch with hard-working American values? Don’t even get me started on dry cleaning. Stay dirty, patriots. And watch out for this guy in Greenpoint:

Sunshine Laundromat is located at 860 Manhattan Ave. in Greenpoint. The pinball speakeasy is currently stocked with both the new Big Lebowski and Ghostbuster games among many others.