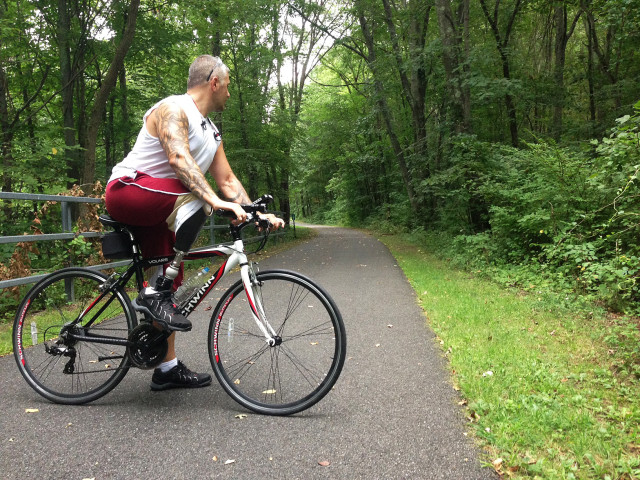 This post is brought to you by Sorta Outdoorsy, a weekly newsletter full of inspiration for outdoor adventures around New York City. View the rest of the newsletter here.

Riding along the former route of the Putnam Division of the New York Central Railroad, the city recedes from memory as you peddle into Westchester. And keep peddling. The ride takes five or six hours, if you’re cycling at a leisurely pace (and why wouldn’t you?). That means you can just ride and ride and ride.

Like hip-hop music, your journey begins in The Bronx. The last stop on the 1 train leaves you and your trusty bicycle near the leafy Van Cortlandt Park. And off you go!

First through the park itself up the Old Putnam Trail. This is the only unpaved section of your ride, but it’s short and flat and can be done easily on road bike tires. You’ll exit the park at the Westchester County line, where South County Trail begins. Over the next 50 miles, you’ll veer between city and country as you cycle along highways and deep forest. One minute it will be babbling brooks and falling acorns tapping you on the helmet; the next minute you’ll be pedaling behind factories and sprawling industrial warehouses. In a few places, like Elmsford, the trail will end and you’ll ride a few minutes through town before that “No Motorized Vehicles” sign appears and you’re back on the trail.

Which is all to say, this is the opposite of a monotonous ride. It’s a compelling and varied and interesting way to see the lands immediately north of New York. You’ll even pass by some of the reservoirs that hold the water you’ll be showering in when you get home. The end of the “Old Put” railway line is in Brewster, NY in Putnam County, where a MetroNorth station awaits.

It’s a little sad to leave the open trail and be a passenger once again. But trust us, by that point, it feels really good to sit down.