Thanks to 15 new miles of bike lanes this year and half a million New Yorkers getting on their bicycles each month, it is becoming somewhat safer to bike in the city. It is, however, substantially more dangerous to be a bicycle here. In three years, I have been the dysphoric victim of four bike thefts. The vast majority of big city cyclists can regale you with similar tales of woe. There’s even a Bike Batman in Seattle who makes it his mission to return over 20 stolen bicycles a year to their rightful owners.

Until Gotham gets the bicycle-saving hero that it needs, how can you keep your bike safe? The NYPD has taken a greater interest in bike theft recently, but unless your theft was on video or your ride was equipped with some nifty GPS tracker, there’s not a ton they can do. The good news is that if you take some minimum precautions you can almost always avoid getting your ride jacked in the first place. We spoke to a few bike shops around the city and provided our own Brokelyn Bikers’ local knowledge on how New Yorkers can best secure their wheels against a five-finger discount.

USE TWO LOCKS AND CHOOSE GOOD ONES

The Bike Truck in Gowanus tells us that thieves “go shopping” before choosing their targets, so if you’ve got the nicest bike on your block, you had better have the best locks. Thin cable locks can be clipped off quickly and without industrial strength tools; those are definitely a no-no. Odds are that if you use two thick U-locks, you just made your bike the most challenging one on the block to steal, so unless you’re extremely unlucky (or at a construction site) your bike probably isn’t going anywhere.

Bike Slug in Bed-Stuy says that a good U-lock (they prefer Avis over Kryptonite) will take about five minutes to saw off with a hacksaw and one minute with an angle grinder. That may seem like nothing, but if you’re a thief with a hacksaw, a few minutes’ difference in the time to make off with your bike is huge.

If you’re going to keep your bike outside for any length of time longer than a few minutes, make sure that any moveable pieces are firmly locked in place. This usually means a U-Lock securing the front wheel and frame, and a thick cable lock through the rear wheel, frame, and seat. Make sure that one or both of the locks are attached to something that can’t be easily sawed through.

SECURE THE SEAT AND WHEELS

If you live up in the mountains or in a bucolic college town, having a quick release seat and wheels can be a godsend for quick repairs or lending a bike out to friends of spectacular height. But in New York City, you may as well have just taped $20 bills all over your ride! Making off with a wheel or the seat takes just a few seconds, and Bike Truck says that wheels are stolen the most often out of any bicycle part.

CityLab from The Atlantic has an amazing rundown on how to secure your seat. If you’re handy, all it takes is an allen-head bolt to lock that sucker on there. And if you really want to make your Ron Swanson of a father or Midwestern girlfriend proud, fill the bolt with silicone adhesive, then take a BB coated in candle wax or bike grease and pop that bad boy in there.!

(Or, if the above paragraph made you hyperventilate because you’re a true New Yorker who faints at the sight of a tool kit, ask the friendly folks at your local bike store to bolt the wheels and seat on.)

LOCK YOUR BIKE TO SOMETHING PERMANENT, IN FRONT OF CAMERAS, AND AWAY FROM POWER TOOLS

Bike racks, street signs, and any thick pieces of metal that aren’t going anywhere are going to be your best bets. Caveat: those perforated green poles that tend to have “No Standing” signs on top are notorious bike traps. Thieves leave the signs loose so they can slide your locked bike vertically off the pole overnight without sawing anything. Before locking your bike to a sign pole, jiggle it to make sure the sign is secure.

Bike Slug tells us that if you can get your bike high up off the ground in a populated area, it can make it more difficult for thieves to look inconspicuous as they cut apart your locks. An angle grinder may only take a minute on a U-lock, but it will make a ton of sparks and noise in the process.

Do not lock to trees. Feel free to watch the video above to see a group of men turn what begins as a casual bike theft into a full on 10-minute lumberjack festival.

Avoid Construction Sites. Scaffolding, like all things in life, is fleeting. When it vanishes, so too shall your bike. The Bike Truck in Gowanus says that thieves can easily slide out thin scaffolding beams, so even before the scaffolding comes down, your bike may be long gone.

While that may seem obvious, get this: if you lock your bike anywhere near a construction site (and this could be anywhere with an industrial dumpster or small sign outside) they might just saw off your locks, remove your bike, and put up an aggressive-aggressive sign like this:

A $5,000 fine dumping seemed excessive, even if they were throwing in a complimentary ass wiping. Being a non-native New Yorker, I called the cops. The cops came, took a report, dismissed the sign, and that was that. The next morning, my native New Yorker girlfriend went over and politely asked the foreman if they had removed a bike the night before. He smiled and pulled it out of their building like it was NBD.

Don’t lock your bike to other bikes. Besides being a dick move if you are unacquainted with your neighbor’s ride, you are implicitly putting their bike in danger of destruction, especially if they took the time to properly lock up. In 2013, I locked my bike frame to my ex-girlfriend’s top tube (upper horizontal part of the bike frame).

Thieves sawed her bike in two, pulled my bike off, and left her broken carcass of an azure beach cruiser next to our apartment as a monument to my loathsome judgement, until it was also stolen in 2014, having long outlived our relationship.

Stick to parking near businesses, they usually have cameras.

At this point, you’ve probably noticed that any time the police are looking for someone, a grainy video of them walking down the street outside of some random business is the default info they release to the public. Whether or not you approve of the Orwellian surveillance state, most NYC streets are being continuously recorded, albeit with huge blind spots away from private businesses and tourist attractions. Do whatever you can to lock your bike somewhere where its abduction will be recorded from a decent angle. Continuously operating businesses nearly always have functioning cameras.

Still, Bike Slug points out that a big part of avoiding theft or damage in a big, dense city is being a good neighbor. Is your bike blocking the delivery way of a bodega? Someone’s parking spot? If you’re locking up somewhere like that for a long time, your bike will have a pretty low life expectancy.

If all else fails and your bike really is stolen, here are yet more handy tips for getting it back:

INVEST IN A GPS TRACKER

There are several companies offering easily concealable GPS trackers that can prove invaluable in tracking down your stolen ride. SpyBike hides theirs in LED lights, seat posts, and top caps. It’ll set you back about $100. Sherlock pops theirs into the handlebars and should be available shortly for a similar price. There are even bikes that come with GPS built in, though these will set you back a few thousand bucks.

If you’re like me and your bike may or may not be worth $100, the Cricket is the cheapest option at $39, though it has a range of only 150 feet and can only notify other Cricket users if your ride is stolen. Postscapes offers a good rundown of the fancier trackers.

REGISTER YOUR BIKE AND USE BIKE RECOVERY APPS

Bike Index is the largest bike registry in the country, so far they’ve helped recover over 3,000 stolen bikes. Registering your bike there and with your local police precinct are good first steps. Bike Watch NYC can also help spread the word when your ride goes missing.

In the event your bike is stolen, filing a police report isn’t a bad idea, if the bike is registered and if there are some functioning cameras around, there’s a chance that you’ll help the police nab some serial bike thieves. If you want to get really serious, be like Bike Batman and spend a few days scrolling through first Craiglist and eBay, then on apps like Letgo, OfferUp, 5miles, Neerbuy, Saily, VarageSale, and Wallapop. All of those apps do essentially the same thing, which is letting buyers and sellers connect with minimal questions asked.

(If that sounds like way too much work, I would recommend getting a GPS tracker.)

QUESTION HOW MUCH YOU VALUE YOUR BIKE

As Bike Slug says, avoiding bike theft is mostly psychological. All locks can be ultimately be sawed or clipped off, so if you absolutely cannot part with your several thousand euro Wilier Cento 1 SR, keep that bad boy inside whenever you can. If you can’t get it inside, wrap it up in duct tape. Getting renters’ insurance is also a good idea if losing your bike would hit you pretty hard in the wallet. When looking for apartments, make sure to include “bicycle parking” in your Craigslist search.

Outside of that, just pick up two locks and meditate a bit on the temporality of life and the folly of property and attachment as you crunch over the leaves in Prospect Park. 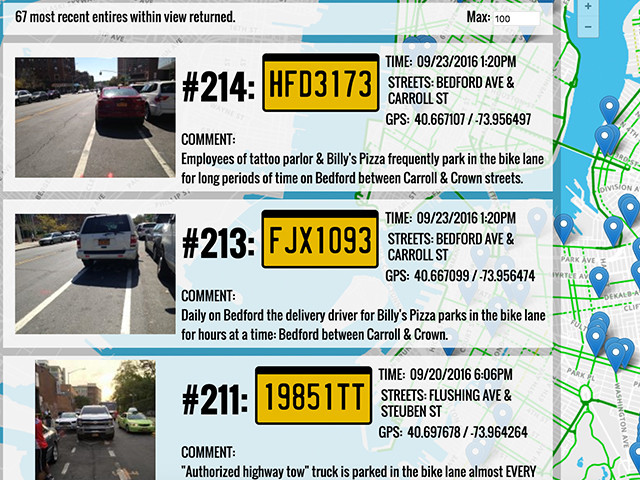