As we watched all of our favorite places close, we’ve at least been able to console ourselves by say, eating the pain away with a trip to Robicelli’s (9009 5th Avenue) for cupcakes or layer cake or even something crazy like Nutellasagna if we were feeling particularly down. But now we’ve gotten word that Robicelli’s is closing on Christmas Eve, with Allison Robicelli and her husband Matt moving their operation down to Baltimore. Shit, where are we supposed to eat our sadness away now?

We reached out to Allison Robicelli after hearing that her Bay Ridge sweet shop might be closing up to see if it was true, and sadly, she said it was. For once though, this wasn’t about a landlord jacking the rent up to an unreasonable figure. “We love our landlord, and couldn’t ask for a nicer guy to work with,” Allison Robicelli told us over email. Instead, the upcoming move is more about the challenges faced by anyone with trying to run a restaurant in the city these days.

“The truth is, we can’t have a business here anymore. Profit margins are projected to continue to decrease for our industry, the young talent is starting to skip NYC entirely and heading to second-market cities where they can afford a living on a cook’s salary, taxes and utilities continue to rise. Some of the rent increases you see have nothing to do with landlord greed- it has to do with paying the costs of a building here.”

Robicelli told us that while blowing off steam on Facebook, the Bay Ridge native finally copped to hating New York City and challenged friends to give her a reason to stay. None did, but among the pleas from friends to move to different parts of the country, a developer from Baltimore gave her an offer that was worth taking moving for. So it’s goodbye to Bay Ridge and hello to $18/square foot for a bakery and retail space surrounded by Orioles fans.

Robicelli also admitted to us that “with the shop, I hate my job. HATE it,” and that between the pressures of being a “some sort of poster child” of NYC’s foodie scene and paying bills and dealing with taxes and other costs, she couldn’t focus on other projects she wanted to explore. Already with the move to Baltimore in the works, she’s got two consulting jobs with other companies, is working on her next book and is writing recipes for other food brands.

“The Baltimore stuff isn’t going to be entirely on us–we’ll be doing the chef thing, but won’t have to worry about minutia and operations. We’ll be setting up a commissary for wholesale first, then expanding to retail,” she told us.

So Allison and Matt are leaving, although the good news (if there’s any) is that you’ll still be able to see their sweets around (Robicelli’s has wholesale distribution in a 100-mile radius around New York City) and Baltimore isn’t so far that they won’t be back to see friends and family. Still, even with a return to the city not totally ruled out, and the decrease in pressure and rent and ability to do more stuff, Robcelli admits that it’s tough to leave Brooklyn:

“Straight up: New York City is all I know. I have never lived anywhere else, nor had the desire to…I’m terrified I won’t be able to function outside of here. I have to remind myself I’ve found ways to adapt to all the changes this city has seen, and let a lot of things go, but still–it’s pretty scary.” 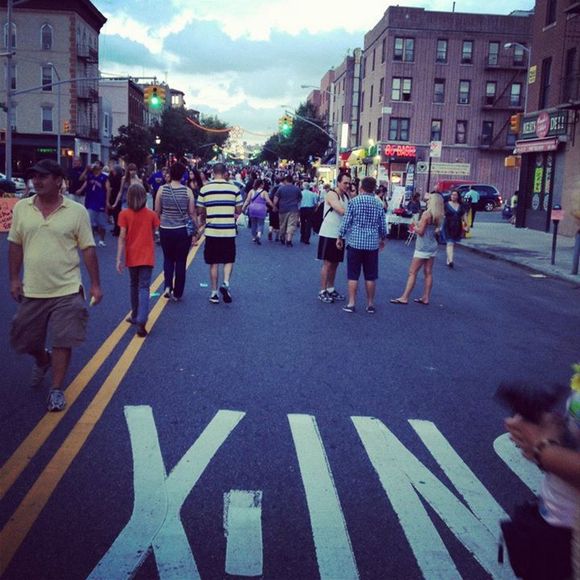