You may be feeling a lot of anxiety going into tonight’s final presidential debate, and that’s completely understandable. Presidential debates are both serious and consequential, and in this election cycle one orange-haired outcome is truly dire.

That’s why we created our favorite coping mechanism, the Brokelyn Debates drinking game (which we’ve updated for the final round). You might remember our game from the last election between O-bummer and Mitt Zombie. Everyone knows that politics is better when you’re tipsy, so why not make it official with a few rules and regulations that’ll help you deal with everything that comes out of anyone’s mouth tonight?

Unlike the debate itself, nothing you do in this game is going to affect who becomes our next president. The game is fully playable and within your rights to modify if you start vomiting halfway through. Print out this post or pull it up on your smartphones to play during the debates, either at one of these watch parties in BK or on your very own free stream at home. Cheers to democracy!

ONE DRINK
– Anytime Trump interrupts Hillary
– If Trump talks about how bad Alec Baldwin’s upcoming movie Boss Baby looks
– If Hillary tries one of those Kate McKinnon leg kicks to seem relatable
– Trump says “Believe me!”
– Hillary makes a “tsk” sound when Trump drops a whopper
– Hillary says “once again…”
– Hillary coughs
-Hillary does a “Jim from The Office” look at the camera
– Chris Wallace tries to inject a fact check
– Trump forms a coherent sentence
– Benghazi reference that lasts less than 30 seconds
– Either candidate says “middle class”
–  Trump says he was working on his platform over a Beef n’ Cheddar
– Anytime either of the candidates make their signature faces of consternation and/or resigned disdain: 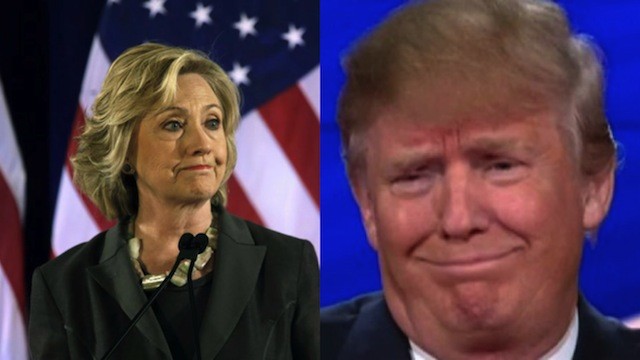 FINISH THE BOTTLE
– Anyone brings up Hillary’s “likability” (and then drink another in solidarity)
– If Wallace gets up to muss Trump’s hair with a light chuckle
– Hillary laughs uncomfortably to keep herself from leaping across the stage to punch Donald in the face
– Anyone brings up anything that might actually benefit NYC residents (affordable housing, public transit, limiting the number of TD banks in a neighborhood)
– In defending his divorces, Trump says “All wives matter”
– Joe Biden kicked out for constantly screaming “FREEBIRD!!” from audience

WATERFALL
– Every second sentence Trump begins after using the first to sidestep a question from Wallace. A new person should join in for each meandering independent clause, parenthetical or aside until he finishes speaking (but don’t, like, die, trying this)
– If Giuliani Skypes in to give a character reference
– For the duration of the time Trump leaves the podium and attempts to stalk behind Hillary like a creepo
– Mark Cuban, Barack Obama’s half brother and oh let’s say Ken Bone get into a wrestling match
– Hillary just stops answering questions and starts shopping for Oval Office curtains on her phone

MOVE TO CANADA AND GUZZLE MAPLE SYRUP UNTIL YOU DIE
– Gennifer Flowers parachutes into the debate á la Fan Man
– Hillary speaks in a sentence that turns out to be a BENGHAZI acrostic
– Every time you stop for a minute to wonder, what the hell happened? How did we get here? How did this nation — founded on the idea of “Live and Let Live”, open for all to come and start a new life, which, despite its many flaws and in many ways unforgivable historical atrocities, has nearly always hewn to its principles of freedom and acceptance, and when fallen short, has striven to improve itself through a steady if painful process of self-reflection and compromise — become an island of frightened children, who look out on the terrors of the world not with an eye of compassion or even pity, nor with the idea to remain a brilliant beacon of hope in dark, stormy waters, but with a jaundiced eye, full of anger, anguish, and anxiety — throw up the walls! Sink the refugee Trojan horse ships! Drone strike the weddings and to hell with the collateral damage, as long as we get the latest number two ISIS leader!; each time you remember our growing wealth disparity, that we still have troops in Afghanistan, that Guantanamo is still open, that the latest generation will be worse off than its parents, that we’re the one first-world country without universal healthcare, that we have a half-trillion dollar defense budget but crumbling infrastructure, that abortion is still an issue, that racism is still an issue, that we have more people in prison than China does, that people are lives are still ruined for minor drug offenses, that there are almost daily mass-shootings and no one bats an eye, that we have one of the most pervasive domestic and international spy apparatuses in the world with almost no legal accountability; each time you wonder how we ended up with a choice between a fraudulent two-bit huckster with psychopathic tendencies, and a hawkish establishment career politician with the charisma of a totem pole, when your browsing history is filled with earnest research on moving to another country, when you think, actually, maybe the terrorists did win fifteen years and a fortnight ago, drink.
-Chris Wallace announces due to ratings the debates commission will hold a debate for the rest of time