This Sunday is the Oscars, a great time to celebrate cinema, talk about diversity in media and watch the most gorgeously dressed formalized reach-around in modern society. While others are complaining about the diversity issue or calling for a boycott, there’s one Oscar party in town that’s actually seeking to fix the problem of #OscarsSoWhite. Dylan Marron — the creator of the web series Every Single Word, which makes supercuts of  the often-sparse dialog spoken by characters of color in movies — is hosting an Oscars screening party Sunday to raise money for a local charity that helps low-income New Yorkers get involved in the film industry. It’s a joke-along, live commentary style event featuring some of our favorite people, including Sean Rameswaram of WNYC and Broad City writer Naomi Ekperigin. The event came together in just a few weeks in response to the lack of diversity in the nominations, Marron tells Brokelyn.

“The day the Oscar nominations came out, I felt furious,” he said. “We don’t have to boycott he Oscars, we can watch them and help raise money for a cause that will hep make sure Oscars won’t be so white for so long.” 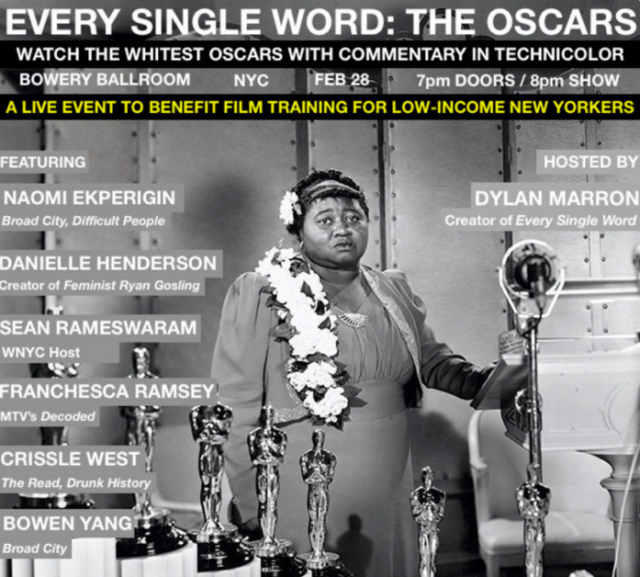 Marron, a Crown Heights resident who is also the voice of Carlos on the hit podcast Welcome to Night Vale, started Every Single Word in the summer “as a way to directly speak to the racial representation in mainstream film.” His presents the simple videos without commentary so they speak for themselves.

The problem with diversity in Hollywood isn’t one racist person making decisions, he said; it’s just a historically impenetrable industry. So the event is donating 100 percent of the proceeds to a Made in NY production assistant training program that gives under-privileged people the opportunity to get involved in the film industry.

“Even to get P.A. work, even to get lowest work on a film set you have to be very well connected,” he said. “I think that’s how this industry is going to change, through grassroots effort.”

“We’ll be watching the award show, we’ll just all be in the living room with our 400 closest friends,” said Marron who, for the record, is pulling for Room for best picture. If you can’t make it and still want to donate, click here.

Every Single Word: The Oscars is on Sunday at Bowery Ballroom, doors open at 7pm. Get tickets here.

If you can’t make it to the city on Sunday, The Oscars are still another excuse to drink and try to up your live-tweeting game. So bone up on some Oscar talking points and check out our picks for the best Oscar watching parties in Brooklyn this year.

For the glamor of a (shabby) red carpet: 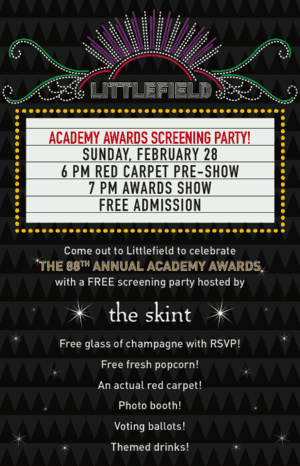 We may not be moving to LA any time soon (or maybe … we should?) so let’s swap out the artificial glam of Hollywood for the real grit of Gowanus. Our friends at the skint and Littlefield are hosting a free watch party, with fresh-popped popcorn, a real red carpet entrance, a free glass of champagne (with RSVP) and a ballot contest to pick the winners.

Videology is the film nerd locus point in north Brooklyn, kind of like hanging out and drinking beers with that super knowledgeable clerk from ye olde independent video store. Check out their Oscar night party and then peruse their DVD rental selection so you up your own film snob quotient.

Syndicated, the new gastropub theater in Bushwickm is hosting its first Oscars watch party this year. It’s the place to go if you want to down some fancy eats while you watch Hollywood be fancy: The theater’s menu includes duck confit nachos, bacon-butter meatballs, steak frites, beer floats and popcorn-fried oysters.

For people who just want to watch the Oscars because The Walking Dead isn’t on this week and what else is there to do:

The Saint Catherine (660 Washington Ave.) is hosting a screening party at their cozy Prospect Heights bar.

Halyards (406 Third Ave.) is doing themed drinks and an Oscar ballot contest, the winner of which gets free shots. It’s hosted by Ned Donavan.

If we missed any parties, feel free to add them to the comments!