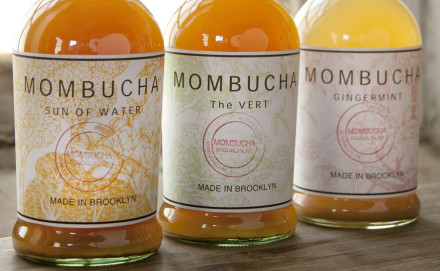 Drinkers of Mombucha, the kombucha-style tea brewed in Greenpoint, Brooklyn, will have more to feel good about than their healthy beverage choices this month and next. Through May 31, all Mombucha “storefront” sales on Zaarly.com will go directly to fundraising efforts for the AIDS Lifecycle Ride to End AIDS. Mombucha creator and master brewer Rich Awn will join friend and Lifecycle team leader Tim Lee for the 545-mile ride, which will go from San Francisco to Los Angeles this summer.

Awn said the fundraising effort was influenced by a Facebook post by Lee and, indirectly, an uncle’s active role in the LGBTQ community. “My whole family is ultra liberal,” he said. “I want to give back to the gay and lesbian community, be active in that community.”

For Awn, starting his Mombucha business wasn’t quite such an arduous feat. In 2005 at age 20, he began brewing a recipe appropriated from his mother.

“I’ve always been a tinkerer, a doer,” Awn said. “Then I started using different infusions and teas.” To prepare for the race, in addition to a training regimen of 20 or more miles of bike riding a day, Awn created a special passion-fruit-infused Mombucha tea titled “Team Wino,” the name of his and Lee’s riding team. “You can drink it while you’re riding and it’s an awesome boost,” he said. Awn hopes to arrive at the race with a contribution of $10,000—an amount that depends on Mombucha sales, and a contribution from Zaarly, which will match up to $5,000.

“Before, I was donating half of the proceeds because I couldn’t figure out how to sustain business,” said Awn, who started offering the deal at a Zaarly Bazaar event in Brooklyn earlier this month. “Now I can be one of their top fundraisers. It’s been satisfying creatively and physically.” To try Mombucha while supporting the fight against AIDS, visit the brand’s Zaarly storefront. Or, meet Rich Awn and other Zaarly storefront owners at the local Zaarly Bazaar on Sunday, April 28 at The Space, 50 N.3rd St. in Williamsburg, Brooklyn, from 3 p.m. – 6 p.m.