We’re not big cab people, but those times when you’re late for a flight after oversleeping because you set your alarm clock for PM not AM, the extra dough is well worth it. Now that there’s a whole slew of cab apps (yay capitalism!), going from Downtown to your sister’s wedding or other urgent destinations need not be so cumbersome-on your wallet. Do all the cab apps offer the same thing just in different packaging? And how do they compare to the tried and true livery cab? We decided to find out for you.

All the apps utilize your phone’s GPS and maps systems to determine your location, and while navigating the apps were simple enough, simple aspects such as color and button layout really stood out and made the experience even better. The best was the bright yellow “Pick Me Up Here” button from Hailo which for some psychological reason was just begging to be pressed.

The players in this game are Uber, Lyft, Hailo, CabwithMe, Bandwagon and the good old fashioned black car, which I took on similar rides of no more than 2 miles. 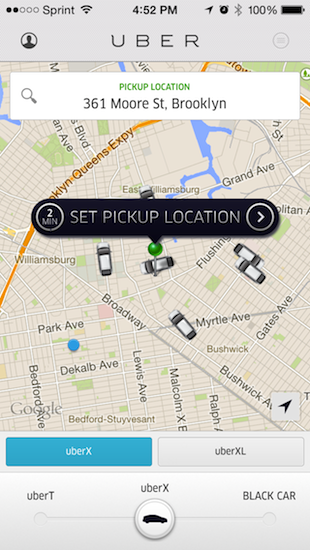 WHAT YOU GET: While Uber has a few options in their fleet, UberX is the least expensive option and thus, the one for us.

On the bottom of the app you scroll to choose which fleet you would like. The default setting is UberX which is their fleet of small sedans. As you scroll the estimated time to pick up changes accordingly and car icons on a map show approximate location of the cars near you.

PROS: Lets you use Paypal, for all of us who don’t want to store our credit card info with yet another app. It’s very straightforward in denoting wait time and cab locations. You can use Uber to hail a yellow cab under the option uberT if you want to stick with a metered ride. A fare quote option mitigates sticker shock.

CONS: The dreaded surge pricing, which jacks up the prices during times of high demand from anywhere from 100% to 800% doesn’t make for a fun trip (Uber did, however, agree to cap prices during emergencies). Whatever price range you’re given through their fare quote option, your actual ride will be on the higher side of said quote. On one ride, their driver took a slightly longer route than necessary. Next time I would completely avoid that driver if he came up again. Clean cars, smooth ride, but why on both trips I took did the different drivers have the AC on so high? For the second most expensive option I don’t want Antarctica. 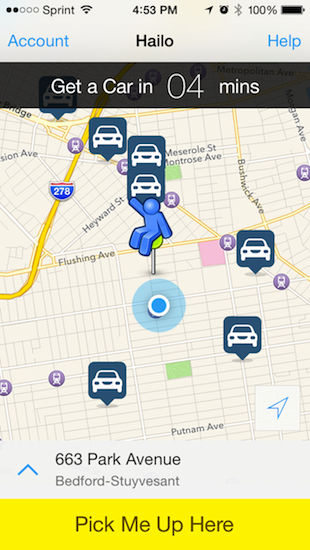 WHAT YOU GET: You can use Hailo to flag down an unmetered livery car from their fleet, a NYC cab or the closest one to you. Swipe the yellow bar that says Pick Me Up to choose between them. The first thing you see when you open the app is a rapid countdown which should appeal to the busy New Yawker in all of us. The random numbers settle into a countdown of how many minutes until your nearest cab can make it and pushing the bright yellow “Pick Me Up Here” button will hail the cab..

PROS: It’s fast and there always seemed to be plenty of cabs. The second-cheapest option of the bunch.

CONS: The choice to switch to one of the three options isn’t completely obvious on first use. 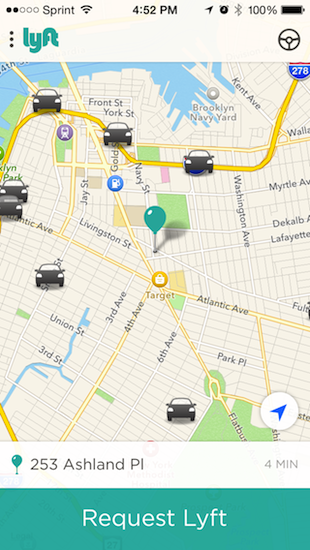 WHAT YOU GET: Uber’s embattled competitor with the pink mustache, Lyft doesn’t provide oodles and oodles of options fleet-wise. Whichever car happens to be near you after you press “Request Lyft” is the car you get. You can see who’s going to pick you up and what car they’re driving after they’ve accepted your hail.

PROS: Simple as all get out.

CONS: Getting a car was almost impossible at first. I tried several times unsuccessfully to get a car, until it finally seemed like the fourth time was the charm. Only then the driver canceled on me two seconds after I thought I had one. The fifth time, though, was the charm. However, I had the bad luck to need a cab during Prime Time, Lyft’s analogue to Uber’s surge pricing. Prime Time means a 75% tip is added when there’s more riders than drivers to accommodate them. Since I was trying to get a cab during rush hour (it was Tuesday at 9am) that $12 cab ride came with a $9 tip, which jacked up the total to $21. Holy crapola! Even without the tip Lyft was the most expensive option – with Prime Time it’s exorbitant. Lastly, there’s no choice of what kind of car you’re riding, if you’re into that sorta thing.

WHAT YOU GET: Independent car companies with names like Black Pearl, Freedom, Dial 7 and Evelyn will take you all over Brooklyn in their town cars, but their service tends to fare better in the neighborhood where their main dispatch office is located.

PROS: Pickup was prompt. I asked the dispatcher how much the ride was going to be and telling the driver as soon as I got in the car what the dispatcher said meant I didn’t have to fight with the cabbie as I have done in the past. The livery cab, when honest and not charging you $15 for an 8 minute ride was the cheapest option out of the whole batch.

CONS: Cash only, people. You’ll have to pray to the NYC gods the dispatcher or the cab won’t charge you too much money, because there’s no set fare in place. NYC’s street hail rules brochure points out “fares, determined in a livery street-hail pickup by haggling between the driver and the passenger are not metered or otherwise regulated and leave passengers vulnerable to overcharging,” so be aware. And no matter what car company you call they’re not known for their customer service. In my case I had to assume the dispatcher hanging up on me was confirmation that someone was on their way. 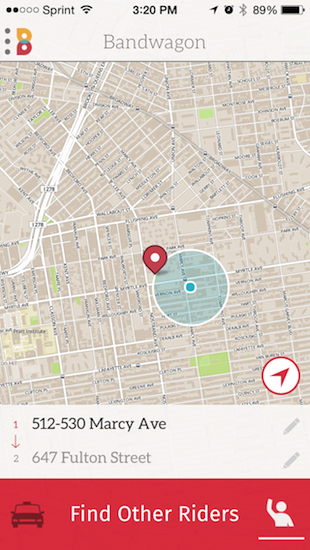 WHAT YOU GET: With all of the attention on the other apps you might have missed Bandwagon. With it you can find someone going the same way to share a cab or car service.

PROS: Allows you to share the cost of a cab ride with another passenger going in a similar direction.

CONS: When I actually needed to go someplace my attempts to catch a ride were unsuccessful. I’m going to assume that usage revs up considerably during heavy usage times such as less than stellar traveling conditions like rain and rush hour giving you a better chance to link up with another rider.

RIDE: Unable to hail a cab when actually needed. 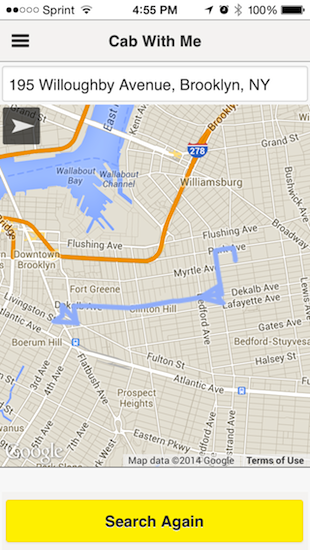 WHAT YOU GET: Supposedly released in time to take advantage of those G train shenanigans to be able to share a ride home, Cab with Me is a phone app that allow you to find someone to share a cab with.

PROS: It finds people going the same way as you cutting down the cost of the ride.

CONS: While Cab With Me plays matchmaker it doesn’t extend that ability to the actual cab to share. After finding the person on Cab With Me, you rendezvous and together you either hail an Uber cab through the app or find one of your own means. The user experience is buggy as indicating the destination through the pins always left me with a destination a few meters away from where I actually indicated. Save yourself the hassle – just input your destination.

RIDE: I couldn’t find someone to share a ride with.

The shared ride companies Bandwagon and Cab With Me weren’t very useful. I had high hopes for them, thinking they would have made a trip even cheaper by sharing, but alas, there must not be enough people on the apps because there’s no way people aren’t looking to share a cab in all of Brooklyn. Out of the fierce rivalry that is Uber and Lyft, Uber was the cheaper option by less than 50 cents, but let those two have their public war. In the meantime, the two cheapest rides in general were a livery cab and Hailo, so when I want to blow my transportation budget on cars instead of a MetroCard, I’ll turn to either of those.