Williamsburg’s eclectic comedy venue the Experiment Comedy Gallery was permanently shut down for safety reasons by the New York Fire Department last night, displacing dozens of performers in a move supporters worry is tied to an alt-right campaign to shutter left-leaning venues. The surprise inspection came from a tip to the fire department that led to the discovery of a lack of proper fire exits. But fans and regulars point to a campaign on sites like 4chan to shut down “radical left” and DIY spaces in the wake of the deadly Ghost Ship fire in Oakland. Mo Fathelbab, who runs the theater, said he suspected the tip was made by a comedian he had banned from the venue who is known in the comedy community for being a right-wing agitator.

“The Trump supporting comic and I got into [it] on Facebook the other night about us being a SJW venue,” Fathelbab told us in an email today. “Vowed to see us kicked out onto the streets. The next day, marshals get an anonymous call and then we’re shut down that night. Don’t have a smoking gun, only a suspicion because of the coincidence in timing.”

The venue is vacating its home at 272 Grand St., and is working on finding a temporary home for shows, plus a new home for the Fuck Donald Trump Marathon.

Fathelbab did not call out the comedian by name (though other comics on his Facebook wall did) and said he could not prove who was behind the tip, but suspected him due to their history and recent squabble.

Brokelyn reached out to the comedian in question, Louie Bee, who denied that he made the tip to the fire marshal and denied saying he vowed to see the club kicked out onto the streets. He told us he wanted to clear the air about his involvement in the shutdown because he was already being targeted by other comedians on social media. Bee said he was banned from the Experiment in March; Bee has not been inside the venue since it moved to its most recent location earlier this year, which Fathelbab confirms.

“I did not call the fire marshal,” Bee said in a phone interview. “If anything my issue is with [Fathelbab], and that’s that. This affected other people, some people that I’m friends with. I wouldn’t do anything that would affect people I’m friends with.”

An FDNY spokesman confirmed the venue was shut down last night, saying the official reason was “life safety issues.” The problem came with a lack of secondary egress, aka a second exit in case of fire. The spokesman also said the venue was operating outside of what the certificate of occupancy allowed, and confirmed the inspection was a follow up on a complaint sent to the department.

'Cause a #Trump supporter was a massive dickhead, The Ex has CLOSED. We'll have more info soon. Meantime, read this. https://t.co/BG9PJcXUvL

The Experiment made a name for itself as an anti-Trump comedy venue well before the election: last year, Fathelbab, a Muslim, introduced a “Donald Trump special” where all Muslims get in free for all shows, which was still in effect until the shutdown. The 31-hour Fuck Donald Trump Comedy Marathon planned for the week before the inauguration came about in response to the election and was set to raise money for Trump-fighting causes.

While it’s unclear who made the tip, supporters pointed to efforts on 4chan and other alt-right (the online horde of racist trolls emboldened by Donald Trump’s rise) to target progressive and left-leaning spaces nationwide. The thinking is that in the wake of the fire that killed more than people at Oakland’s Ghost Ship, an unlicensed art space, smaller and underground spaces will be under more scrutiny from inspectors.

Vice’s Thump site reports those users have formed a “Right Wing Safety Squad” to target underground spaces (with stuff like this allegedly being passed around). One of the 4chan posts reads, according to Thump:

“These places are open hotbeds of liberal radicalism and degeneracy and now YOU [sic] can stop them by reporting all such places you may be or may become aware of to the authorities, specifically the local fire marshel [sic],” the poster explained. “Watch them and follow them to their hives. Infiltrate social circles, go to parties/events, record evidence and report it. We’ve got them on the run but now we must crush their nests before they can regroup!”

Bee grew up on the southside of Williamsburg, dons a “Hillary for Prison” shirt in his Facebook profile and voted for Trump. He was banned from the Experiment earlier this year for several reasons including harassing female comics, Fathelbab said. Bee said it was for telling off-color jokes about women during an open mic when he was trying out new material. He describes himself as a libertarian and conspiracy theorist in online profiles.

On Wednesday, he tweeted at Donald Trump and his sons about starting a pro-Trump comedy show “to slam the SJW leftist bullshit” of the Experiment’s Fuck Trump marathon (they didn’t respond). 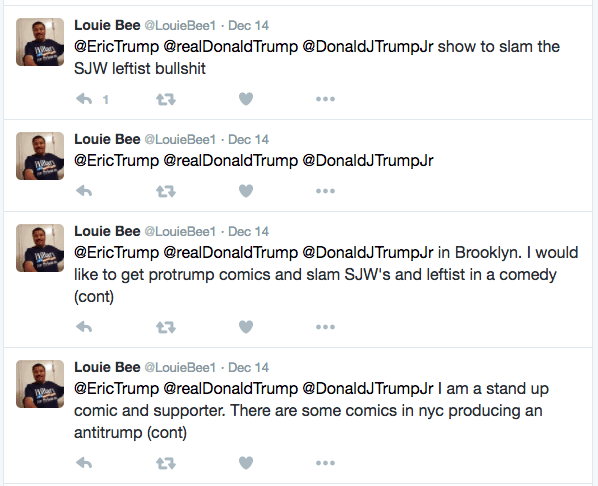 As for the 4chan campaign targeting arts venues, Bee said he’s “semi against it.”

“If you’re shutting it down because you don’t agree with what someone is saying, that’s wrong,” he said. “If you’re doing it because certain spaces don’t care about the safety of people who go in that space, yes they should get shut down because people could die. It’s all about motive.”

Bee said he wants comedians targeting him to “show proof instead of automatically throwing my name under the bus because they don’t like me.

“I’m a Brooklyn boy, if we’re going to do something, we do it to their face. If i was gonna do something to him, he would know it was me. … It just shows how intolerant the left is.”

This is not the first time the Experiment has closed; it was forced out of its original location in April after conflicts with the management company of its building. A successful crowdfunding campaign helped it relocate, where it held free and low-cost shows and open mics most nights of the week.

Fathelbab said he’s working on a backup plan for the marathon and for a new location for the venue; he may also explore legal options against the management of the building they were booted from yesterday. Meanwhile, fans and performers of the venue are mourning its loss on social media: 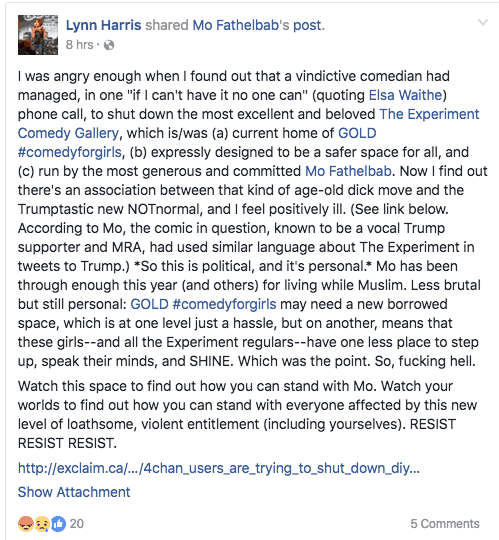 We’ll update our posts about the venue and the Fuck Donald Trump marathon when we get more info.

Update 12/19: While it’s unclear who tipped off the FDNY, the alt-right took credit for the closure over the weekend, and has been trolling Fathelbab and the club’s social media accounts since Friday. Here are a few examples:

This image is being spread around by people gloating over @TheExComedyNYC closing. SS lightning bolts and all. pic.twitter.com/NEgOGQ9cQ0