As midday roles around, you are not alone in feeling your attention wither and accepting the feeling that time is an abstract concept created by carbon-based life-forms to monitor our ongoing decay. The endless scroll of Twitter, the perpetual call of the Facebook feed – while we are seemingly always drowning in content, we are similarly forever lacking in meaning. Of course, while existential crisis have become a trope of Millennial existence, so has the inane, meme-ified humor which, in lacking meaning, is hilarious to us while befuddling to older generations.

In that vein, What Are We Even Doing With Our Lives?: The Most Honest Children’s Book of All Time illustrates the kind of everyday actions which feel warm and familiar up close (especially when they’re being conducted by personified animals!) but cold and soulless when viewed from far (especially when captioned with explanatory notes like “Everyone in the coffee shop is doing something different but they are all very, very busy”). The content is PG with a full second bonus book hidden within the first for those mature enough to read between the lines; it’s also a book which can and does easily double as a BuzzFeed listicle: 11 People You Dated In Your Twenties.

We talked to the book’s authors, BuzzFeed Animals Editor Chelsea Marshall and art director Mary Dauterman, about death and the meaninglessness of this existence – just kidding, we talked to them about Brooklyn and the convergence of childing and adulting. 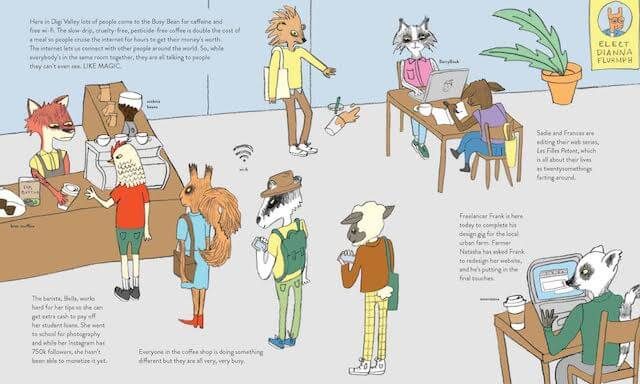 Do you think this’ll appeal more to children or adults?

Mary: As adults, we have more feedback from other adults enjoying it so far, but it definitely designed for all ages!

Chelsea: I think this definitely can appeal to both! Our thing is: if you’d let your kids watch Bob’s Burgers or the Simpsons, then your kid can read this. The most inappropriate stuff in this book would at worst raise some questions or just go over their heads (the only scene that comes to mind is the one about online dating).

That being said, I think adults will enjoy it most fully since they can ~read between the lines~.

Do you think existential crisis of the kind that make you question what the hell you’re doing with your life are genuinely more common in Brooklyn, or is that just the aesthetic people have assigned the borough because everyone hates Millennials?

Mary: I think a lot of us, no matter our location, wonder what the hell we’re doing with our lives. And I don’t know if it’s uniquely millennial (though our generation gets stuck with that description, RUDE). I think it’s sort of a combination of a universal “impostor syndrome” and “am I doing anything meaningful at ALL?”

Our book is very Brooklyn-focused where we see our characters having these little crises in especially Brooklyn locales like coffee shops, public parks, farmer’s markets, and open floor plan startup offices. That’s just the world we know and love and try to find free wifi in!

Chelsea: Existential crises are definitely not a Brooklyn centric condition (I’m from sunny CA and have one off and on since I was a kid). I do think living in cities potentially may lend itself to questioning what we’re doing more because it’s so damn expensive just to survive and you wonder if it’s all worth it a lot (looking at real estate outside of NY and BK makes me weep). But I think “what are we even doing?” is a question humans have always asked themselves. 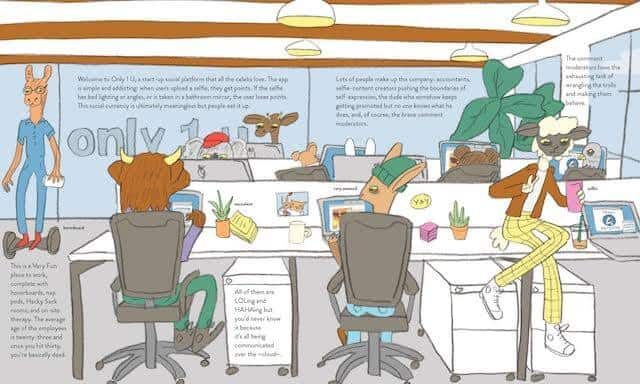 You’re lightheartedly mocking BK culture (right?), but in writing this did you form any firmer opinions about some hipster habits? Did anything start to feel truly negative, or more serious and inspiring than you’d originally thought?

Mary: One true negative that you’ll see throughout the book is how many people out in the world are just sitting on their phones. I think I drew something like 95% of the characters with iPhones in their hands.

We also have lots of characters putting up with stuff like crowds, broken down subways, Airbnbing to make rent, brunch, etc. because that is just how we have to live and make it work in Brooklyn. But we’re all so used to it!

Chelsea: Definitely agree with Mary about the phone usage (although I would argue that’s not just a millennial issue!). I think mostly, we’re all out here trying our best and need to give ourselves a break for not having all the answers. Because anyone who says they know it all, is probably the one who knows the least.

What Are We Even Doing With Our Lives? is available on Amazon.