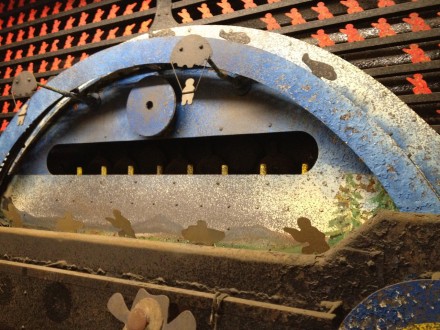 Other than the good news about the New York Aquarium re-opening, stories about Coney Island are almost always sad ones about another piece of weirdness leaving the neighborhood. In this instance, finally, we can report on something coming back to Coney from its old carney past. A shooting gallery from the 1940s is coming out of retirement to amuse us all and test our hand-eye coordination. Finally, all those hours of Medal of Honor pay off.

Amusing The Zillion has the history behind the gallery, a Mangels shooting gallery, which was not only used in Coney Island in the 40s, but was also built here. The game was in the shadow of the Wonder Wheel originally, and will now be part of art group Coney Island USA’s Art/Culture Gallery on 1214 Surf Avenue. But not as an exhibit: you’ll be able to shoot the tin soldiers and paratroopers that make the gallery up. Maybe pretend they’re the people telling you to put on pants because “it’s one o’clock in the afternoon.”