It pains me to say this but the days of many of our nation’s beloved amusement rides are numbered. One way or another, beloved institutions that make up Coney Island and other boardwalks will go away, either due to time, the distractions of Pokemon Go-style games, conversion to condos or the ever-rising sea levels that will soon turn ocean-front property into deep-sea property (but keep arguing about parking spaces, everyone!). With this loss go our memories of youth and first dates and lovably cheesy rides that remind us of a simpler time before paying $20 to see The Smurfs in 3D. We got a taste of this in 2012 when Sandy whacked the boardwalk in Coney Island, damaging many of the rides; at my hometown boardwalk in Seaside Heights, that kooz of as storm sent an entire pier to amusement park heaven.

Among the most endangered of these kinds of attractions are what’s known as “dark rides” like the Spookarama at Deno’s Wonder Wheel Park, those single-cart rides that take you through a haunted house full of ghosts and scares. They’re prime for teenage making out, have been around for 100 years — and they’re disappearing. Only about a dozen of the old-school version are left in the United States, according to one count. Joel Zika, a 36-year-old art and design university professor in Melbourne, Australia, has been fascinated with the dark rides for years, reveling their connection to early horror effects in movies. So he decided to document them in the only way that would truly do them justice: Virtual reality. He’s crowdfunding his project now and planning a trip to Coney in October to record the Spookarama in all its old-timey glory.

“It’s not so much that these are amazing experiences, but that they’re really unique,” Zika told Brokelyn. “All this stuff that’s really immersive, 360-degree experiences, some of them up to 100 years old. That’s fascinating, that’s something that may be more valuable to me than looking at old cinema.”

Just for the record, Spookarama is in no danger of closing any time soon. The ride opened in 1955 in Deno’s Wonder Wheel park and has been running almost ever since. But it took a beating during Hurricane Sandy. Planet Money’s Zoe Chace took a peek inside after the storm and reported it looked like a post-apocalyptic movie scene, with pieces of zombie heads everywhere. The park had to replace the wood floor with concrete and add drains, but it’s still a stalwart ride in the shadow of the Wonder Wheel.

Zika’s IndieGoGo campaign for his Dark Ride Project aims to raise $20,000 in the next week (he’s at about $9,400 as of this posting). So far he’s captured four dark rides and traveled to Maryland, Alabama, West Virginia and Rehoboth, Del. His goal is to capture eight more rides and eventually expand to include rides abroad in Sweden and the UK. The VR recordings of the rides will be available in an archive, which means you can experience them anywhere at any time using your smartphone and a cheap Google Cardboard or other VR headset.

“Lots of people look back to the turn of century and look at these marvelous ways we used to do things,” Zika said. “A lot of that is lost. We don’t have those rides any more.”

The Spookarama in Coney holds a special place in Zika’s project: the ride opened the same year as Disneyland, survived Sandy and still has much of the same framework and elements from its original construction. Coney Island has changed over the years, but it’s still legendary worldwide.

“The rides are like computer games,” he said. “You can update the graphics but the levels are still the same. … And it’s still going, it’s still exactly the same in terms of the way it moves and the way it pushes you around.”

Zika was born in Hobart, Tasmania, and his interest in the dark rides grew out of his early fondness for horror movies (his favorites are still Pet Cemetery and Nightmare on Elm Street). He went to art school but didn’t have much interest in making movies himself. Instead he was interested in the concepts of space and projection that go into horror scenes — those low-tech animatronics and effects that were also used in dark rides. There weren’t many amusement parks in Australia, so he started visiting American parks. Some of the effects pre-date stuff that eventually made it into movies.

“It’s really the history of horror and haunts,” he said. “All the things we think about in films that frighten you, it’s like the blueprint for frights in movies: Stuff popping up behind you and turning you around at the last minute and brushing your shoulder. It’s how we established the codes for slasher film.”

Donors to the project at the $30 level get a custom Google Cardboard VR headset; for $35 you get access to the VR videos Zika has produced so far. Aside from capturing the rides for the ages, he hopes the project will help people across the world recognize the similar art and craftsmanship that went into the rides.

“If you saw the bat on this one, it’s similar to the bat on this other one because this guy made them,” he said. “We’ve all got these shared experiences but we’ve prob never showed each other pictures.”

When he’s not doing this project or teaching, Zika enjoys eating spicy food and doing artwork for heavy metal bands. He’s been to Coney Island three times but this upcoming trip will be his first since Hurricane Sandy. He said he would have assumed kitschy dark rides like the Spookarama would have had a bigger hipster appeal; instead, sneaking into the ruins of abandoned amusement parks and broken down rides seems more popular. There’s no imminent threat to Deno’s Wonder Wheel Park, but it’s not hard to see how another major storm could wipe it out.

Zika studied archives, libraries and websites like this to find examples of original dark rides and ghost trains, which is how he determined there were about 12 left in the country.

“[There’s] this idea that these parks just run because they’ve always run. It’s really hard to get profit. If something happens, that’s it,” he said. “Whether or not they’ve got time to keep a ghost train running is probably not the main priority.”

For more information on Zika’s Dark Ride Project and to donate, check out the IndieGoGo page here. Spookarama and Deno’s Wonder Wheel Park are open through Oct. 30. 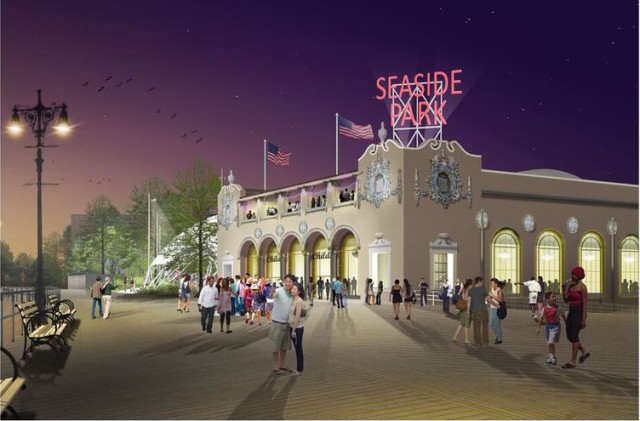 Coney Island is getting a 5,000-seat amphitheater for free concerts, comedy and more this summer

Coney Island has gone through some fits and starts of rebirth in recent years. Some parts are only exciting if you love […]