Even before Arrested Development rose from the ashes like some kind of phoenix, were the kind of person who was always going on about it? Did you memorize every background joke? Know the characters so well you finish each of their…sandwiches? Well, your time has come, with the opportunity to take part in two AD trivia events and one bingo game.

First up, we’ve got Lola BKLYN (387 Myrtle Avenue, Clinton Hill), tonight at 8:30pm. Their trivia is going to cover Seasons 1-3 for the most part, which is only fair since it’s not like everyone spend the weekend binging on Season 4 at home. It’s not a race, even if we’re ahead of most of you and up to Episode 9, it’s not a race. But if you know the secret history about Motherboy or can tell the host what Bob Loblaw has experience being called in to do, you and your friends can find yourselves the winners of a fifty dollar bar tab. Second place (or, first losers) gets a $35 bar tab over which to bicker about who knew the least. Plus there are bonus shot rounds in between rounds, for those who like to yell. Not only is the trivia free, it also has an incredible poster which must be shared with the world: 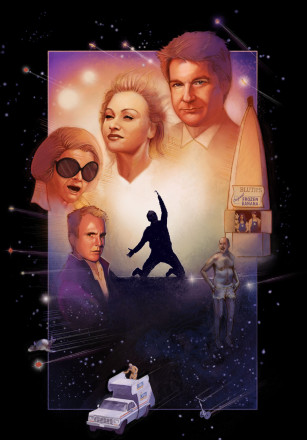 If you didn’t like the idea of binging on he new season by yourself, half drunk and eating ice cream, you can head to the Brooklyn Winery (213 North 8th Street, Williamsburg) for a viewing party and trivia. Starting at 6:30pm tonight, you can sit with other AD fans and argue over whether or not the show has lived up to the hype (it has). Then from 8 to 9:30 it’s a battle of Bluth wits as you see who knows the most about the SEC’s naval division and can properly identify why Michael fancied himself the legal mind of the family. And then after that, you get three more episodes stuffed in you, all for free.

And finally, for something that relies a little more on luck and a keen eye, why not try your hand at Videology‘s (308 Bedford Avenue, Williamsburg) Arrested Development bingo, which will run on Wednesdays at 8:30pm through July 24. This is a show with a slew of tiny background jokes, so you’d better keep your eyes peeled for banner, ice cream sandwiches and Hot Cops, since the first person to spell BINGO gets a free drink. Another way to get a free drink (and a Bluth banana)? Show up, and remain there the whole time, as a never nude. Shouldn’t be too difficult, considering that cutoff jorts are seen on every corner of this burg.