Hundreds of fans and their families came out to play-ay this past Sunday at the Warriors’ Reunion in Coney Island. With the $20 ticket price, the event promised opportunities to take photos with the cast, live music, a movie screening and more. And to be fair, all of that did happen, eventually. But the scene was otherwise kind of grim, as entrants stood dazed in the heat for most of the morning and afternoon, waiting in a winding queue without much sense of what they were waiting for. 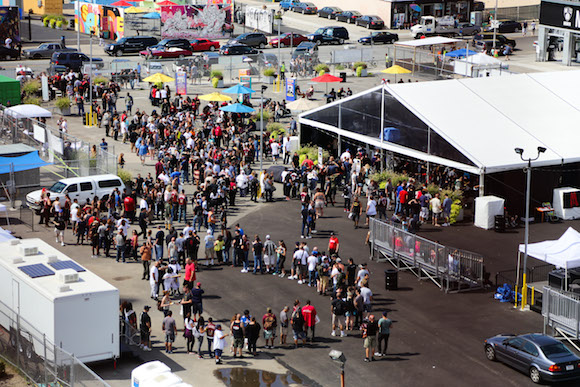 A birds’ eye view of the event (from the top of Denos’ Wonder Wheel) reveals what it felt like to be on the ground-level. The line-up for autographs and vests took up most of the event enclosure, with empty patches where the line wasn’t forming. There was a set of bleachers facing the area that would later become the music stage, but in the early hours of the afternoon, there was no stage to speak of. People were just using the small bank of seats to rest their legs and stare off into the pavement as they waited for the day’s activities to commence.

We wonder if the lackluster event management had anything to do with the co-producers’ rivalry, which came to a head on the Facebook event page last week. “Karma’s a bitch, Mr. Nyenhuis,” wrote ex-producer Joe Russo, who claims he pulled out of the operation when his partner, director Eric Nyenhuis, sought to “deceive” the public by lying about ticket availability.

One small deception was certainly agreed upon by every superfan we spoke to: this wasn’t the first-ever Warriors reunion in Coney Island, despite having been billed as such.

“Nah, this is probably their third reunion here in the past 15 years,” said a t-shirt salesman and Coney Island resident, as he sat hawking smaller-ticket merchandise items outside the main tent. “It’s kind of a neighborhood thing. But last time they did this, there were maybe 75 people, because there was no social media to get people here. It was just word-of-mouth.”

The tent itself, despite being the hub of the day’s activities, was a scene of disarray. In the morning you could chalk it up to disorganization, with security keeping a giant pocket of empty space under the tent so as to control foot-traffic in and out of it (to the dismay of many sun-addled ticket holders). 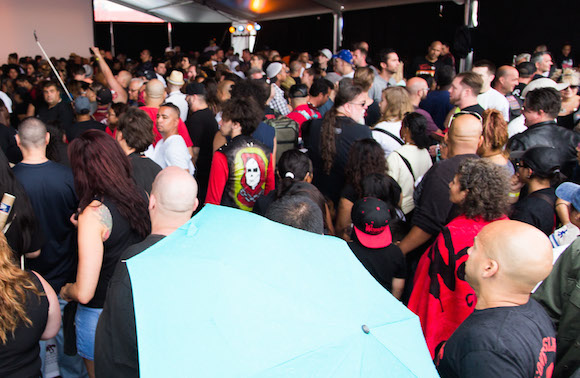 But later in the afternoon, it was downright chaotic, with no clear center of activity but everyone pushing in anyway just to see the cast taking photos with those fans who’d sprung for a $320 VIP ticket (which included the price of the pics).

As varied as all attendees were in their appearance, the crowd was starkly divided by the vest game. You could easily see who’d sprung for a starched, festival-official vest at $150 apiece versus those who’d bought theirs elsewhere or years earlier for a different reason. 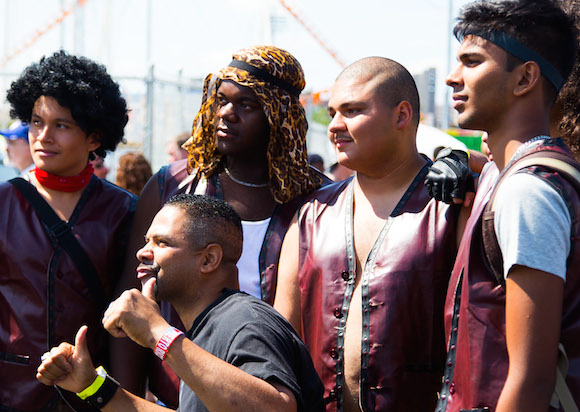 This group of friends said they’d dressed as the Warriors for Halloween last year, and had simply recycled their costumes for this occasion. 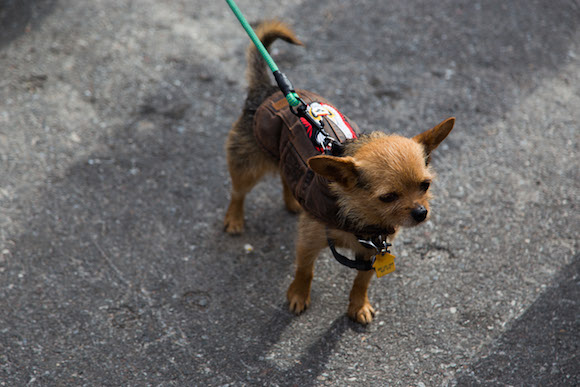 This fan declined to comment, but we’re guessing he had his vest custom-made. XXXXS. 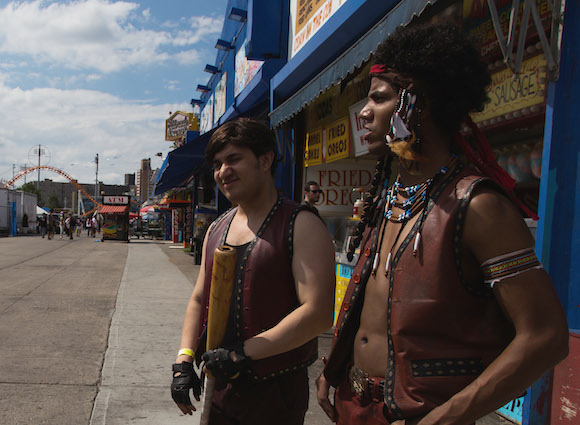 This “Cochise” doppelganger distressed his vest and used spray-paint to make it look weathered for the day’s affair. He and his co-Warrior wandered the boardwalk outside the event, posing for snapshots with passersby.

Angel and his uncle Steve had both gotten to the event right when the doors opened at 10am. Long since sated with their autographed posters and cast photo-ops, they chatted with us about the generational endurance of The Warriors. 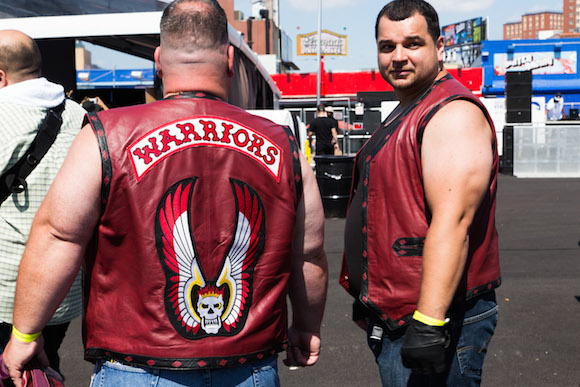 “I grew up in Williamsburg, you know, before it was what it is now,” Angel tells us. “I started watching The Warriors with my uncle when I was 6 years old.”

“He just passed it on to his son!” adds Steve.

But years later, for a generation born into a city largely purged of its gang violence, does the movie still ring true? “Nah, not anymore,” says Angel. “But it did.”

Having been in his fair share of gangs himself back in the 70s and 80s, Steve finds the whole idea of leather gang vests a little cartoonish. “Leather gang jackets would have cost $500 in today-money. I don’t know, maybe we all just wore the same bandanas.”

All in all, the event was probably satisfying for anyone who just wanted a photo or an autograph. But for the kind of fans who really wanted to revel in the spirit that makes The Warriors such a timeless ode to New York City, The Warriors’ return was anti-climactic.

Hey, at least people were well-dressed: check out some more photos of the event on the next page.