If you’re like me you probably don’t have a job that provides healthcare, and since Obamacare has yet to actually take effect, the only sensible way to treat illness is with the medicinal powers of laughter. This huge roundup includes regular, hilarious Brooklyn (and a few Manhattan) comedy shows that provide hilarity for free, or at least on the cheap.

The shows featured here are distinctly not your average hit-or-miss, audience-heckling standup acts (partly because I can’t bring myself to sit through that stuff long enough to review it). Even as Brooklyn’s comedy scene has gotten larger and better, churning out the Kristen Schaals and other future stars of the world, the best comedy has remained budget-friendly. These are the kind of shows where you can see big names as well as the best up-and coming entertainment in the New York scene without having to break the bank. To paraphrase a Hannibal Burress quote, comedy shouldn’t be a luxury. It’s a necessity.

BIG TERRIFIC
A weekly comedy show hosted by Max Silvestri, Gabe Liedman, and . [Slate moved to LA, but the show is still on!] The show is in its fourth year and these comedy veterans know what they’re doing. Lineups have been known to include both burgeoning local acts and internationally known acts. 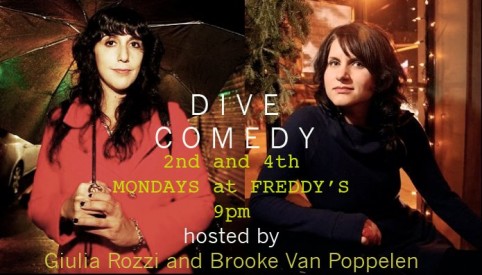 DIVE COMEDY
Comedy, storytellers and music hosted by super funny ladies Giulia Rozzi and Brooke Van Poppelen. Great indie comics and people that have appeared on Late Night With Jimmy Falon, Comedy Central, LOUIE, the Late Late Show, Letterman, the Moth, Best Week Ever VH1, and the list goes on and on …. trust me on this one!

COMEDY AT THE KNITTING FACTORY, HOSTED BY HANNIBAL BURESS
Proof that big names in comedy don’t have to cost a dime; any given Sunday you can find former SNL and 30 Rock writer Hannibal Buress regaling the crowd with his famously cool comedic timing. This show is always packed (so get there early) and for good reason; featured guests have been known to include comedy staples of the NY and LA circuits (Louis C.K., Chris Rock, Todd Barry, Aziz Ansari, Donald Glover) as well as up-and-coming acts and musical sets, such as DJ Roofeeo.

GET IT OUT THERE – COMEDY BY BAM & IFC
There are so many great things about this comedy show. It’s hosted in the beautiful BAM café, which, if you haven’t seen it, is gorgeous. The line-up consists of a combination of extremely well-known comics (Wyatt Cenac, Todd Barry) to emerging talent, all of whom use the venue to try out the freshest of their fresh material. Also, there’s a bar and it’s free!

THE MOON
One of my favorite shows on this planet and elsewhere, The Moon is a comedy/variety show that showcases acts across multiple platforms. Hosted by Nat Towsen and Bob Walles, the show centers around an original theme every month, providing entertainment that runs the gamut from standup comedy, sketch, storytelling, lego animations, dancers, reverse burlesque, music, and videos. Summarized by Moonkid (and friend of Brokelyn) James Beard: “It’s pretty much like The Muppet Show, without the Muppets.”

The Moon consistently books very high caliber guests both big and small – from well-known performers such as Janeane Garofalo, mc chris, and David Cross, to more obscure gems. Reggie Watts is a frequent visitor on The Moon, and if you haven’t yet experienced his crazy improvisational vocal stylings you should make that happen for yourself asap.

HOT TUB
Hot Tub is Kurt Braunohler’s weekly variety show. From 2005 until this year he ran the show with former co-host Kristen Schaal who just recently left NYC for LA (boo). Braunohler is so funny that he even has a new show on the teevee: Bunk on IFC.

Lucky for us, the live show will go on, and we can continue to expect great comedy, music, and, as their website precises “other weird shit” on a weekly basis. Hot Tub is known for its eclectic musical and comedic guests, such as the Gregory Brothers (of Autotune the News fame), and NYC comedy staples Wyatt Cenac (The Daily Show) and Annie Lederman.

When: Monthly – the last one was this Saturday, Aug. 18
Cost: $8:
Where: Ongoing monthly residency at Union Hall; will also be at Bell House twice in the next year as well (check website for details)

PARTY MACHINE
True to its name, this show really is like being at the super-fun party you wish you were cool enough to throw back in high school. Arden Myrin (MADtv, Chelsea Lately) and Lisa Delarios (Live at Gotham) bring tons of energy and each episode centers on a new theme (examples: Michael Jackson, Prom, Snow day). Adding to the atmosphere is the whimsical 80s/90s throwback dance-music-comedy of Adira Amram and the Experience, winners of the 2011 ECNY Award for Best Musical Act. Not to mention the impressive line ups; past guests have included the likes of Zach Galifianakis, Anna Gasteyer, Michael Showalter, and many many more.

When: Once a month, Saturdays (check the calendar)
Cost: $5
Where: Union Hall, 702 Union Street, between Fifth and Sixth Avenues, Park Slope

PRETTY GOOD FRIENDS
Eugene Mirman’s long-running Sunday show at Union Hall is guaranteed comedy gold. High-quality guests are there every time with varying comedic styles but always the best New York has to offer – these are people who are comfortable with their audience and comfortable with each other, you know, like pretty good friends! Earlier this summer the show moved to the Williamsburg Waterfront for a show with indie band OK Go and Mirman is currently on tour and doing his The Fifth Annual Eugene Mirman Comedy Festival, but check back because this one is definitely worth seeing live.

When: Select Saturdays, doors at 8:30, show at 9pm
Cost: $5 Sliding Scale (on one gets turned away if they legitimately can’t afford it)
Where: Dead Herring, 141 S 5th St #1E (between Bedford Ave & Driggs Ave), South Williamsburg

CHEAP DATE COMEDY SHOW
Hosted by Sharron Paul (College Humor) & Calvin Cole (TBS Just for Laughs), the show gathers a lot of acts mentioned elsewhere in this post, such as Greg Barris, Wyatt Cenac, and a bunch of great newcomers you may not have heard of. Take the hint and bring your Ok Cupid hookup here, have a laugh, some free snacks (!) and stick around for some bocce ball afterwards.

OUTSIDE BROOKLYN, BUT STILL CHEAP

DADDY’S BASEMENT
This is a show by Skinny Bitch Jesus Meeting (NYC comedy circuit, all sorts of comedy festivals, UCB), which is comprised of the ladies of sketch, the deliciously irreverent duo Katie Hartman and Leah Rudick. Billed as a “Comedy Variety Freakshow Extravaganza,” the show is dark, funny and features sketch, stand-up, music, burlesque and, according to its website “Bare Asses WITHOUT poop on them! (maybe!)”  You can expect high-quality musical guests such as The Reformed Whores and Corn Mo. Worth venturing out of Brooklyn for this one! (The Pit frequently has other free shows on so check out the schedule).

THE SKINNY WITH PETER DeGIGLIO
This is a different kind of comedy show format, more along the lines of The Daily Show or The Colbert Report. DeGiglio talks about current events, brings on talented performers from all backgrounds, and engages a special guest in an informative yet comedic dialogue. Peter has a weekly “homework” segment where he presents his findings on something he was previously ignorant about. Recently he gave the most concise explanation of the “Higgs-Boson” particle I’ve ever heard, using Gary Coleman as a reference.

When: Second Wednesday of every month
Cost: $10, $8 Students, half-price with the secret password “Year One” (at the door) or “yearone” (on smarttix).
Where: The Red Room 85 E. 4th St., East Village

VINTAGE VANTAGE MUSICAL VARIETY SHOW
Kyle Supley’s unique monthly musical-based variety show features “retro miscellany” that harkens back to a simpler time. The show itself is along the lines of old time variety shows such as ‘Sonny and Cher’ and features stand-up comedy and other funny guests, always with the incredible house big band, Pendulum Swings Big Band, providing that extra ambiance.

This is just a sampling of some of the hot talent out there. Let’s hear from you!  What are some of your favorite free/cheap comedy shows in our lovely city?