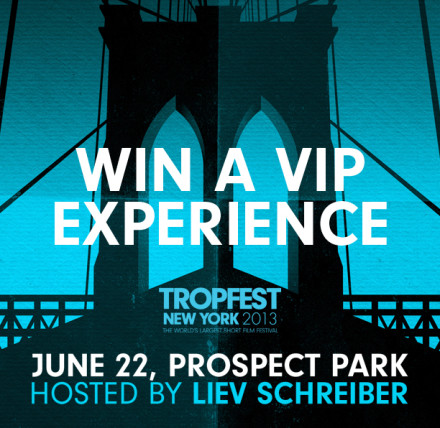 Tropfest, the world’s largest short film festival, is moving to Brooklyn on June 22nd. This fantastic fete in Prospect Park has all the things we love: big stars, free entry, and lots of movies. We’re so excited to have this show in our fair borough that we’re giving away two VIP passes to one lucky brokester!

This ain’t your grandmother’s giveaway. Tropfest is BIG — over 10,000 people showed up at last year’s US festival. With these passes you’ll get off the main lawn and into the VIP tent. You’ll be hanging out with just 250 people, among them festival host Liev Schreiber, the participating filmmakers, and the entire panel of celebrity judges. You also get reserved seating for the show and free food and drink!

Starting at 3 p.m. Chairlift, the DJs from Neon Indian, Bear in Heaven, Ghost Beach, and People Get Ready will be spinning and playing. At 6:30 there’s a black carpet event in the VIP tent with Liev Schreiber and the judges. Then at 8, Liev takes the stage and kicks off the main event: the screening of the short film competition.

Tropfest was started in the early 90s by filmmaker John Polson when he showed his own six-minute short at the Tropicana Cafe in Sydney, Australia. From these small roots the festival has grown into a worldwide event at venues in the Middle East, Asia, Europe, India, New Zealand, and, of course, Brooklyn (with even more places to be announced). Despite its immense popularity, the festival remains free for all to attend.

Interested? Of course you are! To enter just put in your e-mail address below. You can earn more entries by liking Tropfest on Facebook, tweeting about it, and getting friends involved. This contest ends soon so don’t miss out on this chance to experience Tropfest like a movie star.