Today is May Day, and thousands of people across the country are going on strike to stand in solidarity with workers and immigrants. There are going to be protests all day long (and stretching into the night), so don’t worry if you aren’t able to go on strike. On Thursday, Trump is visiting NYC and will be greeted by thousands of protesters, and Cinco de Mayo celebrations in support of immigrants and Latinx groups round out the week. Without further ado: 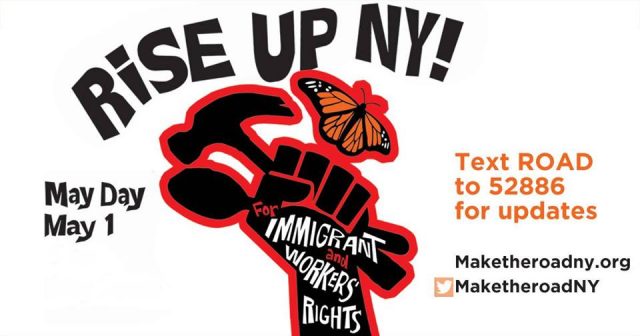 Protesters are meeting outside the New York Public Library steps at 7:15am, then marching to “a nearby site.” This rally, organized by Make the Road New York, is a stand against Trump’s deportation machine and in support of the thousands of people who are threatened by his administration. It’s scheduled before regular work hours, too, so it’ll be accessible to more people and a the first thing the news covers on May Day. 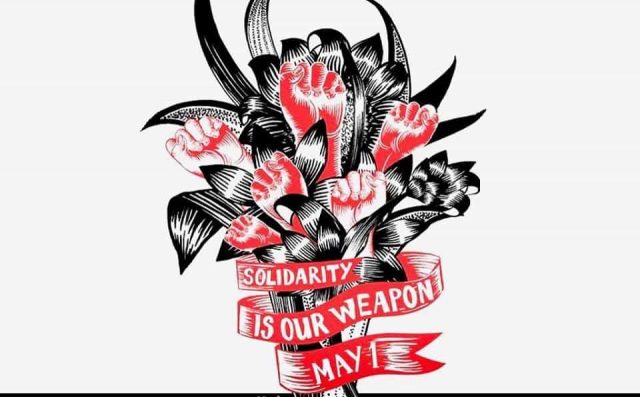 MuJew, a group of Muslim and Jewish activists, is having a series of May Day events. At 9am there’s a protest at Grand Central Terminal, followed by a 12pm meeting at Washington Square Park, where they’ll meet up with the May Day Women’s Strike protesters. At 4pm, people will be marching from Union Square to Foley Square, and at 5pm there’s a rally at Foley Square.

Protesters are going on strike and gathering at Union Square at noon to demand an end to raids, deportations, and war. At 5pm there will be a march to Foley Square. Several groups will be meeting at the rally, including Cosecha NYC and other immigrant advocacy groups, an anti-facist bloc, a queer bloc, the DSA, and more. 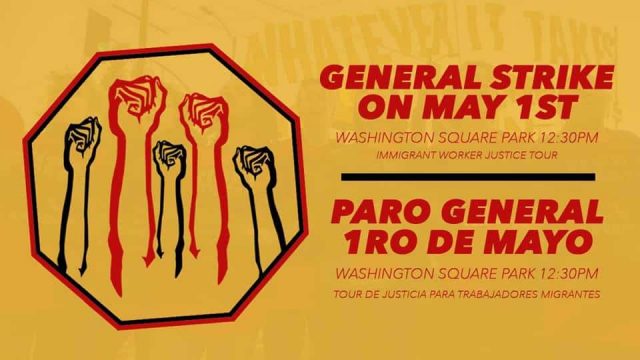 Another protest, organized by several immigrant justice, labor, and activist groups like ICE-Free NYC, Coalition to End Broken Windows, and the International Women’s Strike, is kicking off with a rally at Washington Square Park at 12:30. At 2pm, they’ll start marching downtown to Foley Square.

Groups marching around the city will converge at Foley Square at 5pm for a May Day rally. There will be several speakers, including Linda Sarsour, Leticia James, and others, as well as musical performances. 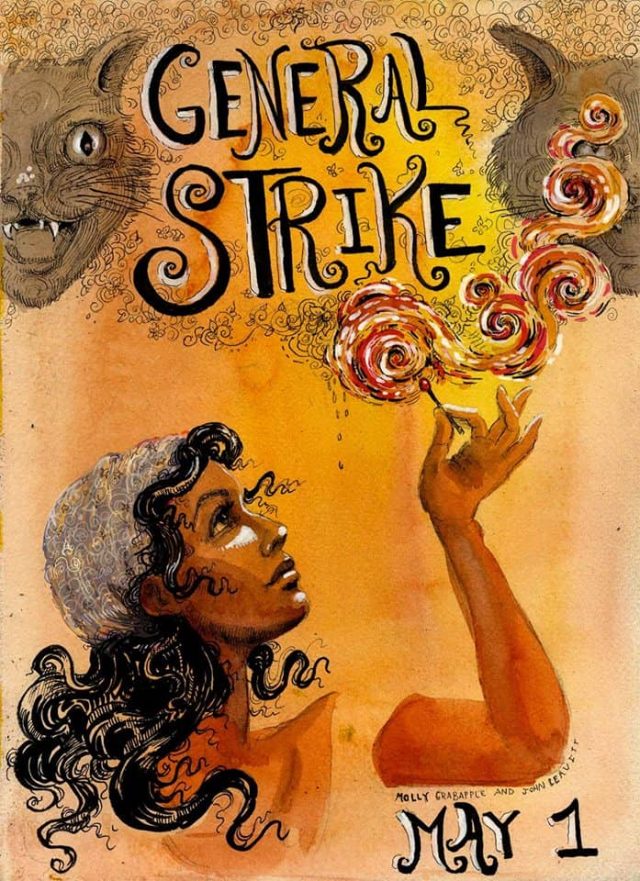 Starr Bar is having an all-night happy hour to support the protests that will be happening throughout the city all day. Have a drink or two after a day of marching, where 10 percent of the profits go to Mayday Space (the place where many of these protests were organized in the first place).

Three candidates are running as part of the Progressive Caucus Alliance, and you can meet them at this Monday night fundraiser. The address isn’t public, so if you want to attend the event you need to RSVP to [email protected] 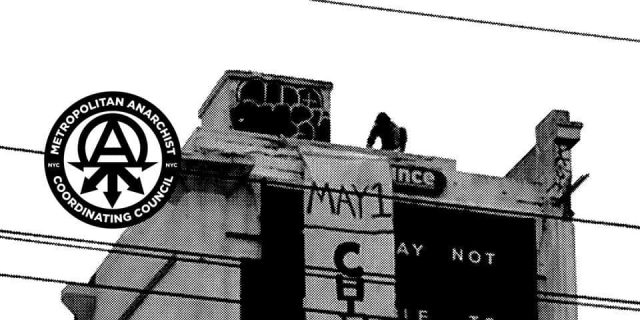 There are tens of thousands of incarcerated people across the country who work either for prisons or companies that use prison labor, and whose labor rights are severely limited. This protest is a way of standing in solidarity with them, since many of us won’t be able to go on strike or protest on Monday.

Panel speakers including CNN’s Brian Stelter, Vox’s Laura McGann, and author of Messenger of the Right: Conservative Media and the Transformation of American Politics Nicole Hemmer, will discuss reporting on politics in the age of “alternative facts” and the future of reporting on Trump’s administration at this Brooklyn Historical Society event.

Join Joy Ladin, Amy Butler, Garrad Conley, and activist Binyavanga Wainaina for a discussion about faith and LGBTQ rights at Housing Works. Ladin is the first transgender professor at an Orthodox Jewish institution, Butler is a senior minister at Riverside Church, and Conley, the son of a minister, is the author of Boy Erased, a book about going through conversion therapy.

Starr Bar’s monthly concert series continues with a May show featuring Shilpa Anath and the Berger Sisters, who will perform songs about political struggles. There’s a $5 to $10 suggested donation, but no one will be turned away for lack of funds, and as always, 10 percent of proceeds go to Mayday Space.

Videology is hosting the Citizens’ Climate Lobby’s latest monthly meeting, where members will discuss what climate action policy should be pushed at the state and national level. 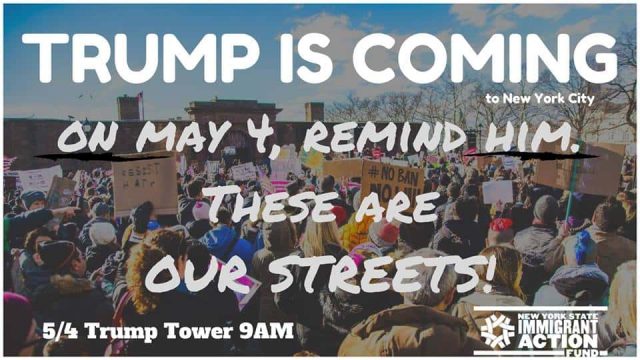 Trump is coming home for the first time since his inauguration, and protesters aren’t going to give him a warm welcome. People will be gathering at Trump Tower all day long starting at 8am, so feel free to come and go at any point throughout the day.

Another anti-Trump protest is being held at the Intrepid Museum, although the exact time is still tbd. People are encouraged to bring signs, noisemakers, and more to let the world know how New Yorkers feel about Trump and his policies. 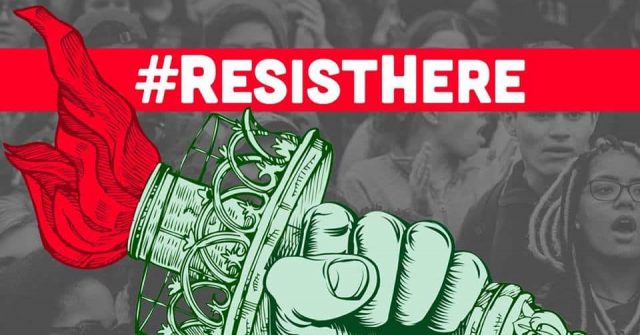 And another group is rallying at DeWitt Clinton Park, though the exact timing is also tbd. Protesters are encouraged to bring pots and pans for a cecerolazo, a Latin American style of protest where people bang pots and pans to make as much noise as possible.

Rise and Resist protesters are gathering across the street from the Intrepid Museum on Thursday, but their exact timing is tbd. They’re sending out a text alert about timing and more to people who sign up here.

Trump is having a private dinner at the museum at 7:30pm, so protesters will be staying until around 10pm, and people are welcome to come and go whenever they’re available.

The Brooklyn Music School is launching their East x Middle East festival this year to highlight local talent and New York’s musical and ethnic diversity. The lineup includes the New York Andalus Ensemble Today, Zikrayat, and Vatan. There will also be a pre-concert workshop. 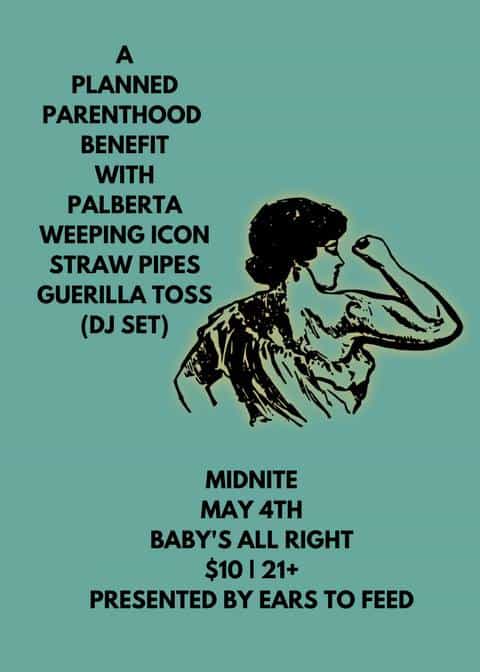 Trump is probably going to be pretending to enjoy another Trump Tower taco bowl on Cinco De Mayo, and protesters are gathering outside his family’s home to show the world how they feel about his racism and anti-immigrant policies. This is both a protest and a Cinco de Mayo celebration, and organizers are trying to hire mariachis, eloteros, and more for the event.

The City Reliquary is showing a presentation on Robin Person’s Triangle Fire Memorial Quilt; plus readings by Bracha Nechama Bomze, Mary Anne Trasciatti, and Paola Corso; musical performances by Annie Rachele Lanzillotto and Phyllis Capello; and a brief theatre performance by LuLu LoLo. All the performances will focus on either the Triangle Shirtwaist Fire or its contemporary equivalents, including factories and sweatshops around the world. 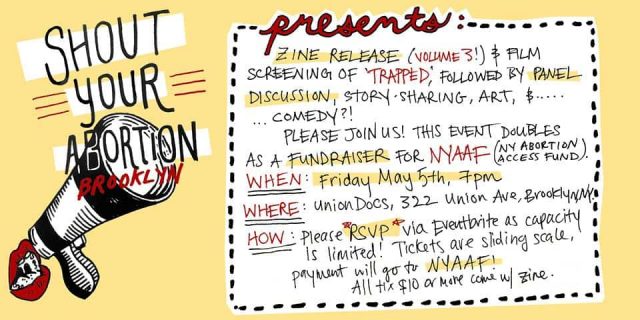 The Shout Your Abortion BK collective is hosting this film screening and zine release, benefitting the New York Abortion Access Fund, on Friday. They’ll be screening the feature-length documentary Trapped, followed by a panel discussion with a Planned Parenthood escort, the director of Names of Women, the government affairs and advocacy manager from the National Institute for Reproductive Health Action Fund, and the principal research assistant at the Guttmacher Institute.

This party has no cover AND free tacos, and all bar proceeds will be going to the ACLU. The lineup includes Alex Cecil, Peter PONY Clement, Nico Kass, Ostro, Oliver, and Artem Artemov, also there are free tacos starting at 7pm and other yet-to-be-disclosed giveaways. 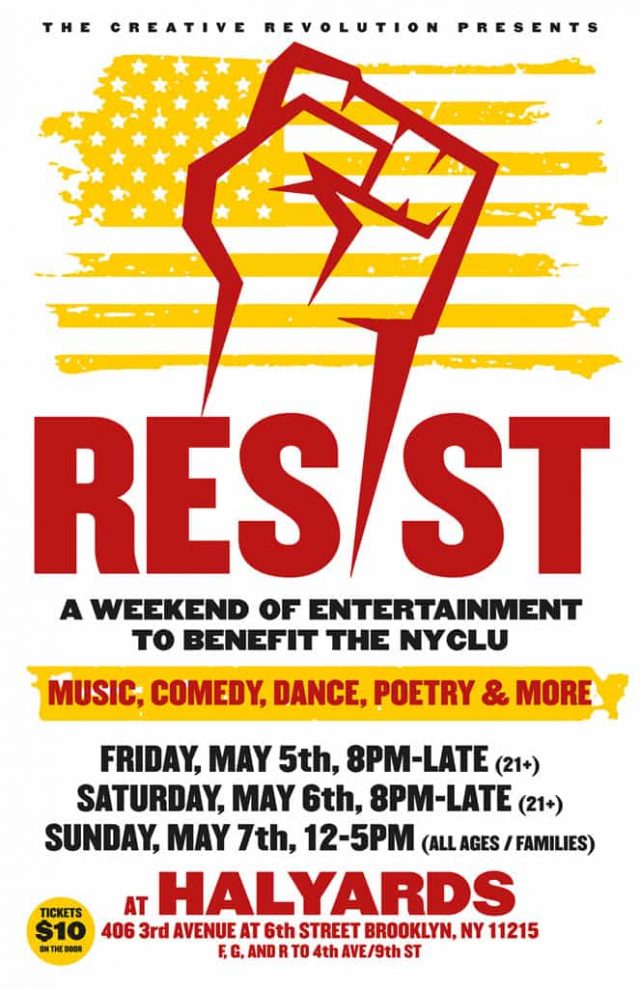 A Weekend of Entertainment to Benefit the ACLU
Halyards
406 3rd Ave., Gowanus
8pm
$10

There are 13 artists performing at Halyards on Friday, including American String Conspiracy, Frederick Gubitosi, and more, plus a DJ set from Old Time Religion Radio late at night. All proceeds go to the New York Civil Liberties Union, and there’s another show on Saturday and yet another show on Sunday.

Riverkeeper and Friends of Bushwick Inlet Park are cleaning up the river, gardening, and plating at the park. They’re asking all volunteers to wear sturdy shoes, boots, and clothing that can get dirty. Don’t forget to bring sunscreen, a hat, and a reusable water bottle and snacks! 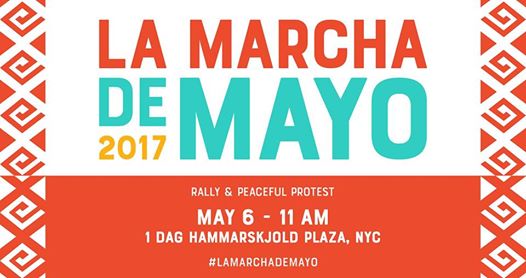 Celebrate immigrants and the Latinx communities in the US/NYC with this Saturday afternoon rally sponsored by Mixteca Organization, CUNY DREAMers, Manhattan Young Democrats, and more. Protesters are gathering at 1 Dag Hammarskjöld Plaza at 11am, then marching to Trump Tower. If you feel like joining in at any point, follow @LaMarchaDeMayo on Twitter for updates.

Cities like New York have been crucial in the fight against Trump (think of the JFK protests and how quickly the Muslim ban got overturned). This all-day event includes multiple sessions on municipalism and its relevance in NYC, a social and political mapping of the city, and next steps.

A Weekend of Entertainment to Benefit the ACLU
Halyards
406 3rd Ave., Gowanus
8pm
$10

The Saturday lineup includes Alex Morris, Mike Cobb & the Crevulators, PINKY SWEARZ, a DJ set by DJ Spencer and Anna Copacabana, and more, with all proceeds once again benefitting the NYCLU.

On Sunday,  Halyards is wrapping up its weekend of entertainment with music for children and their families. Beau Edmondson, Jamison Sevits, and Mike Cobb will be performing, and this final event is free to the public.