Finally, after what feels like a campaign that has lasted since before most of you were born and will still drag on until most of us are dead from exhaustion/rising sea levels/Trump internment camps, we have reached the presidential debates. The final debate of this election goes down Wednesday Oct. 19 at 9pm, and it should be a hell of a blood sport: it’ll either be Hillary Clinton’s chance to prove that she’s the only actual adult running for president who has at least read one or two books about international politics, or the chance for everyone in the nation to collectively face palm while thinking “I can’t believe she’s really going to blow this.” Either way, being out and about among your fellow Brooklynites with a drink or two or 13 in hand is recommended.

Here’s our roundup of bars showing the debate on Wednesday, including bars with drink specials, debate bingo and free Cheez-Its (because of the orange guy). Most are also showing the subsequent debates, and all are free. We’ll update the list as more roll in too. And don’t forget to bring our Brokelyn debates drinking game with you too!

NOTE: We suggest you double check to make sure the bars are showing the debate before you go unless their events are explicitly listed below.

All debates start at 9pm

Twitter will be live-streaming the debate (the actual video, not just your witty 140-character jokes) for the first time. ABC will also stream it on Facebook Live, and YouTube is streaming it free as well. 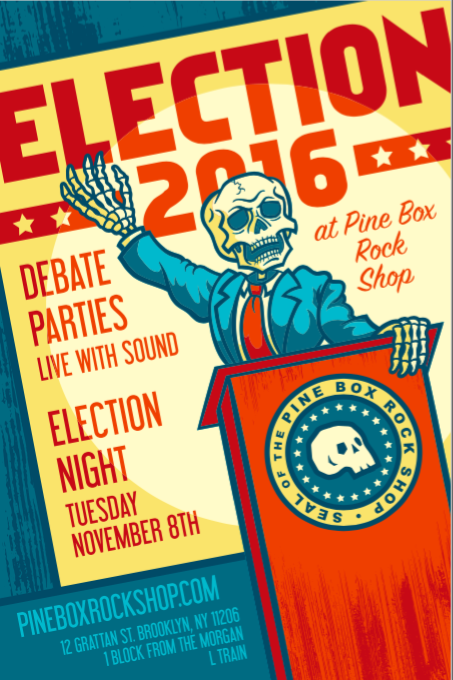 The Elephant in The Room (The red martini): “A decidedly deranged take on a classic – just like the Grand Old Party. St. George Absinthe and Greenhook Gin, shaken with apple juice and grenadine and served up. Made in America with American Made Booze!”

Tremendous Trainwreck (The tall orange drink): “Made with our cheapest liquor, this spin on a Long Island Ice Tea gets its bombastic look from a healthy float of orange soda. Believe me!”

The Pantsuit (The short green drink): A power cocktail with a softer side. Owney’s NYC rum shaken with Midori and almond milk and served on the rocks. This all-vegan libation is First Lad approved!

The Graham predicts a mudfight for the final presidential debate. Sidle into a booth at their bar and take shots in their drinking game, plus free popcorn!

Dual HD projections of the debates, plus buy-one-get-one pre-debate specials from 4pm-9pm.

Watch on the 96″ screen with sound.

Watch the debate in HD on the bar’s massive screen. Swing through beforehand for a political comedy night hosted by Zilla Vodnas and happy hour!

Enjoy the bar’s fall cocktail list along with free Cheez-its (because, orange).

The soccer pub loves politics too so it’ll be showing the action on its big screens, with beer and drink specials.

This haunt is known for its screening capabilities, seeing as how it hosts movie nights every Monday. Head to Huckleberry for the third and final presidential debate, and sip on fall cocktails while you watch.

Nitehawk is showing the debate at its downstairs bar Lo-Res and the lobby screen from 9-10:30 p.m.

“Strong drinks” and free popcorn will be on hand at the watch party in this Gowanus pub, where the debate will be shown in three rooms with two bars serving you all night.

The spacious brewery and beer pub will be hosting the debate in the main bar, with drink specials, $15 buckets of Threes beers and pitchers.

This Chicago bar is the place to be if you want to watch both the Cubs playoff game and the debate: The game will be on the big screen outside, while the debate will be shown inside, with one screen in the back showing the game for those who want to watch both. Plus, its usual free popcorn and cheap beer specials.

Enjoy one-of-a-kind beer-based cocktails, specials from the kitchen, and political games while you watch the debate on the 13-foot screen. 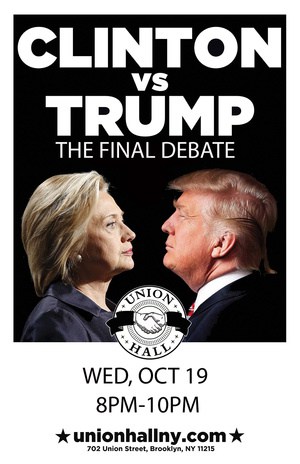 (Upstairs only) Drink specials and more. If you get mad, throw some bocce balls. 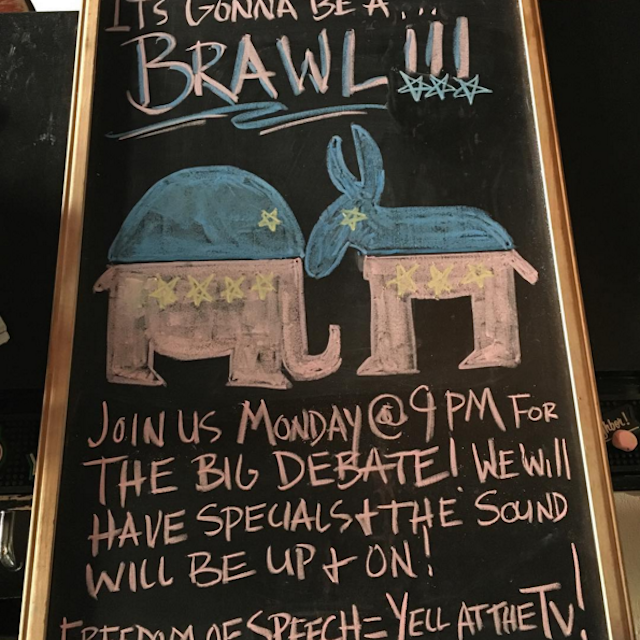 The Bed-Stuy music venue screens the final debate in their front bar, and their $7-9 beer & shot specials start as early as 8pm!

The Bay Ridge Democrats are holding their official debate watch party here starting at 8pm, where you can pair political drama with the pub’s menu of British food.

Watch the debate on the big screen at this restaurant/bar/coffee shop.

The debate will be shown on the big screen with drink specials and more.

An appropriate venue for this rodeo of a campaign, Branded will be showing the debate on all its screens and on a big screen in the back room. They’ve got food and beer & shot specials too.

The debate will be projected on the wall at this corner bar/restaurant, which always offers up a solid beer and cocktail selection. 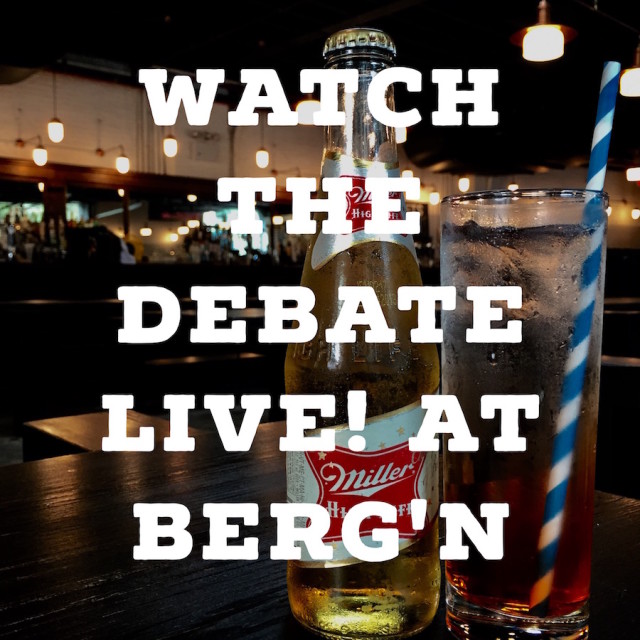 Free popcorn to eat (and throw!) at this Greenpoint beer-centric favorite.

Watch the action on the HD projector in the newly reopened venue/market’s main ballroom, with $7 beer and shot specials all night long.

Did we miss any? Let us know in the comments or email tim[at]brokelyn.com. We’ll keep updating this post throughout the remaining 45 months of this election cycle.