So you missed the indie-rock tabernacle choir and the Yeah Yeah Yeahs at Union Pool are already sold out. Bummer, man. But pretty much everyone is putting a #SandyBenefit angle on their events so there’s still plenty of options to enjoy entertainment and booze while helping hurricane relief efforts. Here’s a few, starting with a free Occupy Sandy volunteer party tonight at The Bell House.

Occupy Sandy Volunteer Appreciation Party
You gave back to the community in a time of need, now Occupy is throwing a party in your honor. Drink specials, DJ and surprise musical performances.
When: Wed. 11/28 9pm —
Where: The Bell House, 149 7th St., Gowanus
Cost: Free

The Kitchen is Flooded & Other Disasters
Work It Brooklyn and Brooklyn Based are hosting a chefs storytelling and food industry networking event to raise funds for ReStore Red Hook.
When: Wed. 11/28 7:30pm-9:30pm
Where: Brooklyn Brewery, 79 N. 11 St., Williamsburg
Cost: $15 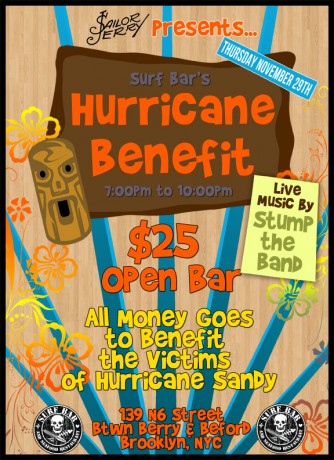 “Searching for Tom Curren” screening and live performance
This one is for surfing enthusiasts with a little cash to burn (how is it that surfers always seem to have money?). The cult classic surf film will be screened in the Wythe Hotel screening room followed by a Q&A with special guests director Sonny Miller and legendary surfer Tom Curren. The ticket includes open bar and snacks by Reynards. After that the party will relocate to Pilgrim Surf + Supply for an acoustic performance by Tom and a raffle of boards and other surf gear. All proceeds benefit Waves for Water – Hurricane Sandy Relief Initiative.
When: Fri. 11/20 7pm-9pm + after screening performance & raffle
Where: Wythe Hotel, 80 Wythe Ave., Williamsburg // Pilgrim Surf + Supply, 68 N. 3 St., Williamsburg
Cost: $150 for screening + open bar at Wythe; After party at Pilgrim is free and open to public 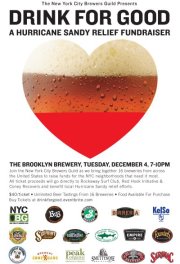 Heard of other hurricane relief fundraisers, benefits, parties, drives, rallies, bonfires, brunches, ballyhoos, contests, etc.? Tell us in the comments to tweet them to us @Brokelyn.