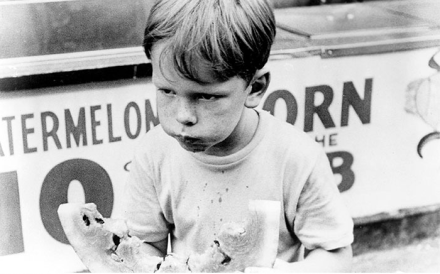 If you’ve been wondering what Coney Island was like back before we were dreading the idea of an Applebee’s opening up there, now’s your chance. This week, Film Forum’s screening Little Fugitive, a 1953 film about an adorable 7-year-old who uses Brooklyn’s favorite amusement park as a hideout after he thinks he shot his big brother (don’t worry, it’s just a prank!)

Directed by native Brooklynite and New Wave pioneer Morris Engel, Little Fugitive features handheld shots of bygone Coney Island landmarks like the Steeplechase carousel, the Tornado rollercoaster and a working Parachute Jump, plus classics like the Wonder Wheel. And it’s a pretty accurate snapshot of the era. Engel used a concealed 35mm camera to follow star Richie Andrusco – who Engel decided to cast after spotting him on a Coney Island carousel  – and many of the crowds and carnies the camera captures were unknowing extras. The film was nominated for an Academy Award for Best Motion Picture Writing in 1954, won a Silver Lion at the Venice Film Festival and is considered a major stylistic influence for the famous French New Wave film The 400 Blows. You can catch it at Film Forum through this Thursday; the theater is located at 209 West Houston street in Manhattan, and tickets are $12.50, members $7.