Launching an app may very well go down as the great get rich quick scheme of the century. As you sit pondering when that freelance check will ever show up, the idea of channeling your creative energies into creating a brilliant, modern tool to benefit your fellow earthlings while also heaping in small mountains of cash for yourself can feel wildly appealing. So what you didn’t finish that online coding course, apps are the great equalizer, a feat anyone with a dream and motivation can accomplish to great financial gain, right? Maybe sometimes, but before you start funneling all your rent money into making an interactive Pizza Rat emoji filter (for which you will charge approximately $5 on Google Play), here are some tips from someone who has already launched an app and knows the oft unforeseen challenges.

This year, Patrick DeVivo launched Geoflow, an app which maps Wikipedia articles using your phone’s GPS. As fun as it is to use the random Wikipedia article generator to aimlessly gain knowledge you’ll probably never get to reference, Geoflow can quickly lead you to the geographically relevant stories within your immediate area (or across the world, your pick). It isolates the buildings near you that have stories interesting enough to have merited themselves Wiki entries, and it thus focuses your attentions on the more historically rich or generally interesting spots in your neighborhood. 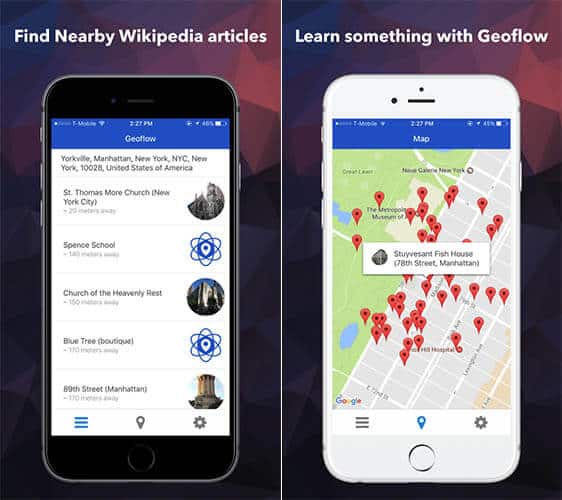 We talked to DeVivo about the realities of launching an app in New York. Hopefully his insight will give you a better idea of whether investing all your time and money into such a venture is worth it for you or not. Because if not, get rich quick schemes can quickly become much more akin to get broker faster schemes

If you possess 0 computer-savvy, cash, nor coding skill but have a vision and time, should you still try to build an app or is it hopeless?

Currently it’s pretty difficult to go from zero programming knowledge to a fully released app, as far as I know, in a short period of time. There are plenty of code schools in NYC and online courses that I’m sure have great programs that will teach beginners what’s necessary, however those require a fair amount of time (and with some, financial) investment. There are a number of “drag and drop” app building tools out there as well, but I don’t believe any are robust enough to enable a complete beginner to build anything beyond a simple content-display app. I could be wrong, and of course everyone learns at a different rate and “beginner” is a flexible definition. Beyond the development of the app though, there’s also a bit of know-how involved in prepping it for release on the app stores and managing new versions, in app usage analytics, error reporting, etc. Learning those aspects is just a matter of being ready to use Google, read documentation, and trial and error.

Is this a good way to get rich quick?

No. It’s amazing to think about how many people your app has the potential to reach once it hits one of the stores, and what that can translate into from advertising revenue or in-app or app purchases, but the developers who “get rich quick” have a fair amount of luck on their side, or perhaps a large marketing budget. Your app going viral is a like a “black swan” event, and not anything you can seriously bank on (unless you really know what you’re doing) – and as far as I know, that’s really the only way to “get rich quick” from an app. Building your app into a recurring revenue source requires a lot of attention – both to the product and to the marketing. There are a lot of variables at play, and plenty of resources out there that dive into more detail, but generally speaking you have to be very aware of your target audience, how to improve / modify your app to continually engage users, and where and how to channel your marketing efforts in driving user acquisition. I’m struggling quite a bit with finding the right ways to get my app out there, especially on a small budget.

What’s the hardest part about launching an app?

For me it was getting the word out. I think a lot of developers, myself very much included, tend to have an implicit assumption that if “I build it, people will come.” This can be frustrating, especially when you feel like you’ve built something cool and useful, but are struggling to get downloads and usage. Once you’ve created your product, you need to put quite a bit of effort into marketing it, and tweaking it to respond to what will engage users.

Is New York a good place to launch an app?

I can’t imagine a better place (unless your app is Boston focused…), at least as far as in-person resources (other developers, designers), marketing resources (word of mouth via meet-ups, local businesses, start-ups, etc.) and code-schools / mentorship if you need it. But outside of these, I don’t think geographical location will have a significant impact, unless of course your app is heavily NYC-focused.

Are there any notable holes in the current app market that Brooklynites would be well-equipped to fill?

Specific to Brooklynites, I’m sure there’s plenty of potential for interesting NYC or Brooklyn related apps. I’ve always thought a “Yelp for buildings” could be very cool – designed for NYC renters and subletters. Basically users should be able to rate the building they live in, so that people looking for apartments can get an inside scoop on things like the amenities, overall cleanliness and upkeep, how the super and landlord are, etc. Just an idea, maybe not worth the hassle though. Could work better as an integration into something like Streeteasy.

What are your fave 5 apps for Brokesters?

What inspired your app?

I had just moved into a new apartment in Chinatown, and was starting to absorb some of the history of what was around me – the depth of which I had no idea – from movies, museums around the city, and word of mouth (including overhearing local tour guides). I wanted an easy way to engage with the history of what was immediately around me, and a location based search for Wikipedia articles seemed like a great way to do it. I use it in neighborhoods all around the city now to learn something.

Most important thing you learned while building a New York-relevant app?