The craft beer scene is exploding in New York City. It seems like every week there’s a new brewer in town and a new alehouse with 30 taps. The nonprofit New York City Brewers Guild, which started with just five member breweries a few years ago, has expanded to almost 30. They brew everything from single-batch beers to internationally-appreciated ales. All this diversity in the fermentation ecosystem is good news for us hop heads, but it’s easy to overlook some terrific beers. To stay on top of the burgeoning beer scene, head to the upcoming Eighth Annual NYC Beer Week.

From Feb. 24 until March 5, venues all over the city will be holding craft beer events, including parties, tastings, tap takeovers, and brewing demonstrations. We’ve highlighted the must-see feature events below, organized by the New York City Brewers Guild, with a sampling of other events to whet your palette. So let’s grab a pretzel necklace and check them what’s in store!

NYC Beer Week officially begins with a pop — many, to be exact. On Feb. 24 at 7 pm, bartenders all over New York City will be cracking open kegs for SimulTap, the official start of the merriment. And what’s flowing from those taps are the singular SMaSH brews. Fifteen brewers from the NYC area came up with their own unique brews, from Belgian Saisons to Imperial IPAs, using the Single State Malt and Single State Hop (SMaSH) sourced from upstate farms. Check out the full list of brewers and beers available at SimulTap and throughout the week.

The official kickoff party, the Opening Bash Invitational features over 45 domestic and international breweries with UNLIMITED TASTING. With just the price of admission, you’ll get to try some of the best beers in the world. There’s also a pop-up gastro garden to pair food and beer and fun surprises in store. General admission is just $55. VIP tickets, $70, get you in the door an hour early and free food all night. DD for the night? Just $12 gets you in (though no beer).

Fermented foods have been with humanity ever since a farmer first left his wheat sitting out a little too long. 35,000 years later we are blessed with a huge selection of aged treats, from kimchi to Kombucha. These fermented foods will be celebrated at the first ever NYC Fermentation Festival. This family-friendly event will feature vendors sampling and selling fermented goods, seminars and demonstrations for the DIYer, fun educational events for kids, live music, representatives from NYC homebrewers and fermentation clubs, and more. And of course there will be beer! $20

The premier event of the NYC Beer Week, NYC Brewer’s Choice is an evening of food and beer pairing brought to you by Beer Sessions Radio™, the Good Beer Seal, and the NYC Brewers Guild. Admission gets you access to over 40 speciality beers made just for this event and poured by the brewers themselves. On top of that are over a dozen chefs’ tables and vendors with cuisine from brisket to raw oysters. Get a full lineup of brewers and beer on the Eventbrite page. $80

Beer Week ends with a big blowout where just one brewery will get bragging rights and the famed Ruppert’s Cup as recognition of being this NYC Beer Week’s Favorite New York State Brewery. Guild members will also honor the best bartender, best beer, best event, and more. Come cheer the winners while enjoying special collaboration beers, food trucks, and your favorite regional brewers amidst Pac Man and Galaga cabinets. Free admission — pay as you go with a portion of the proceeds going to the NYC Brewers Guild.

These are just the big-name events. NYC Beer Week has plenty more to offer, like classes, tastings, and tours at eclectic venues around the city. We’ve named some here to give you a taste of what’s ahead.

Learn how to brew beer, try your hand at it, and taste some winter beer samples. (All proceeds benefit The NYC Brewers Guild & Just Food.) $45

Tour and taste new beers before they hit the market (and some brewery-only brews) at Brooklyn’s surf suds purveyor’s headquarters. $10

Taste beers from 16 homebrewers, curated by beer journalist Joshua Bernstein, paired with food from the kitchen at Jimmy’s No. 43. $35

Some of Brooklyn’s newest and coolest breweries gather together to celebrate beer and talk brewing on a panel discussion. Keep an eye out for the tap list. Free admission.

Anthony Accardi, owner and brewer of Transmitter Brewing, will show you the wonderful world of beer and cheese pairing — with plenty tasting of both. Surprise beers and cheeses might just make an appearance. $55

NYC Beer Week runs from February 24 until March 5 at venues throughout the city. See full list on the NYC Beer Week website and download their app (iPhone and Android), with schedules, beer trail guides, and more. 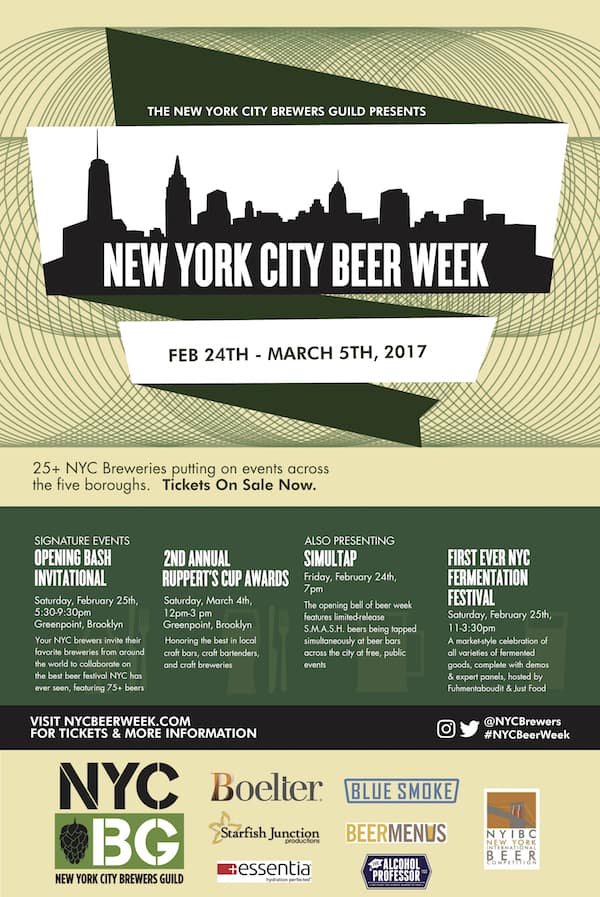