All New Yorkers are familiar with small spaces. It’s a way of life; it’s a point of pride; it’s the most aspirational sections of Ikea stores. Plenty of us have experienced teensy, tiny Williamsburg studio apartments. But what if you shared that studio space with your best friend? Like, what if you shared everything, including a full-sized bed?

Writing and acting duo Katie Baker and Corrie Nance lived the above scenario for two months — sleeping in the same bed, accommodating each each other’s dating lives and taking on the challenge of trying to sleep through the impossible cacophony of sounds that are a woman getting ready to leave the house in the morning. They made it out alive, and they’ve turned the experience into Full Disclosure, a hilarious new web series out now that’s part Broad City and part Three’s Company.

“Every episode touches on something that really happened,” Katie told us. “There was one particular weekend when the stories were just too good, and we were like — this has to be written.”

When Corrie made the move from DC to NYC seven months ago, she was following a Kimmy Schmidt-esque dream to start fresh and make it in the city, and, without anywhere to live, Katie offered her a side of the bed to share. She took an internship at the a software company where Katie worked and simultaneously moved into her North Brooklyn studio, where they lived for two months until the lease ran out. The writing partners and former UNC Wilmington roommates actually lived and worked together, in the beginning — but Katie soon quit her job to focus on filmmaking.

The series was filmed on location in the actual studio apartment the girls shared, over just three days. While a lot of it is based in truth, the girls never actually had to share sex space.

“There was a lot of cock-blocking,” Katie said. “And we went on a lot of day-dates.”

The nine-part first season clocks at around 25 minutes total, meaning you can take in one at a time at just under three minutes or, as of today, binge ‘em all at once guilt-free. The subject matter feels familiar — Tinder addiction, late night pizza runs, Justin Bieber — but the approach to storytelling is fresh, funny and slightly absurdist. 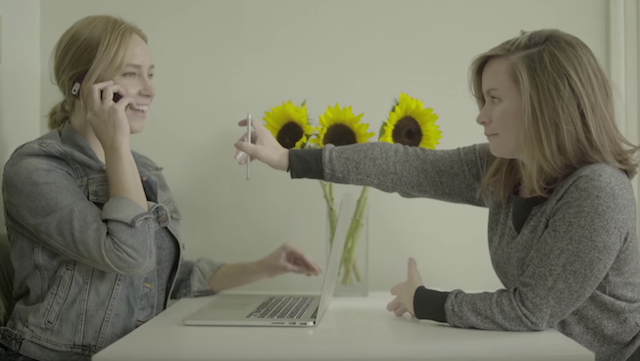 “One thing I’ve really enjoyed is trying to create visual comedy through editing, and it’s something I would like to explore even more in season two,” Katie said. “My biggest influence in that regard is Tim and Eric. They are my true heroes.”

Currently, the girls are sharing a two-bedroom in Crown Heights and working on that second season. “We’re punching it up a bit and making the episodes a little longer. We’re also talking about doing stand-up together,” Corrie says.

The 31-year olds may have their own beds now, but they’ll always have the video footage to remind them of that time they lived like little Brooklyn sardines.

“Someone started calling us the bunk sisters, telling us we needed to get bunk beds,” Katie told us. “We legitimately considered it. The series came out of things like that — realizing how ridiculous the situation was.”