Given that they’re a faceless bureaucratic public authority that’s always making us late, if they’re getting us anywhere at all, we like to have some fun around here crackin’ goofs at the MTA’s expense. That being said, we’ll give them credit where it’s due today, because they just put out the above 16-bit video breaking down how a delay in just one train leads to the dreaded SERVICE GAP that can throw off an entire line and how conductors fix it.

The whole thing is very well done, from the simple graphics down to the jaunty chiptune providing the soundtrack, and you actually learn something about how the MTA works. Here’s hoping they do more of these videos explaining the inner-workings of the subway system, including some passive-aggressive ones that take shots at the governor and the state legislature when they break down where the money for the system comes from. 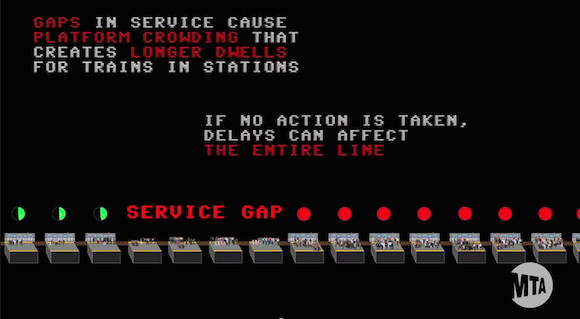