Anthony Weiner has managed to go through a good deal of public humiliation since deciding to run for mayor. There was the part where it turned out he was still sexting. The whole “slutbag” thing. The indignity of being yelled at by third-string cable goon Lawrence O’Donnell. But could anything prepare him for his “ripped from the headlines but not legally actionable” appearance of sorts on Law and Order: SVU? Because tonight he gets that ignoble treatment, as hotshot mayoral candidate “Alex Munoz” gets embroiled in a teen sexting scandal. Fun fact: the nom de sext of the “not Weiner so you can’t sue us” is Enrique Trouble. A knockoff of the famous Weiner bulge pic [NSFW-ish] briefly appears in the preview, on site called “Pleasure Without Consceince.” This will be glorious, so don’t miss a minute of it tonight at 9pm on NBC. 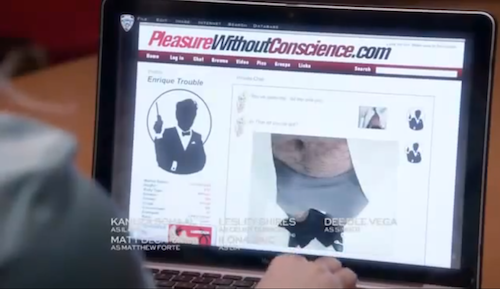