The new cheesecake-shake union joins the “One-and-Only” New Yorker Cake Shake, a similar item in the dessert lineup that consists of a strawberry milkshake crowned with a slice of strawberry cheesecake.

Stacked with a decadent slice of pumpkin cheesecake, the Junior’s signature milkshake glass is adorned with vanilla frosting and graham crackers. Inside the glass sits a thick shake of blended vanilla ice cream, cinnamon and brown sugar. The original New York Cheesecake is rich, but the cream cheese is by no means overwhelming. For the pumpkin edition, the award-winning cheesecake slice is baked on top of a house made pumpkin pie filling and topped off with pumpkin mousse rosettes.

Those interested in indulging in the shake are invited to do so at any of the three Junior’s locations across New York and one in Connecticut. Fourteen flavors are offered year-round at the original Brooklyn location, with seasonal favorites like the Pumpkin Pie Cheesecake revolving about its menu. For visitors lacking a sweet tooth, breakfast, lunch, dinner and any other diner-like food can be enjoyed.

We’d argue that the flagship location residing at the corner of Flatbush and DeKalb Avenues in Brooklyn brings the strongest old-school feel along with a touch of history. Fans of Junior’s are pretty diehard, according to Hayes Taylor, one of the general managers at Junior’s. After a fire engulfed the restaurant in 1981, Taylor tells me that patrons shouted “save the cheesecake” while firefighters were battling the blaze.

“There are definitely people I see everyday,” Taylor said. “Junior’s has always been reliable,” which is why Taylor believes that the neighborhood restaurant has survived for so long.

Opening its doors in 1950, Junior’s and its cheesecake is a Brooklyn staple, and is right up there with the Brooklyn Dodgers, the Fox Theater and Coney Island. Decked out with Brooklyn memorabilia, the 8000-square foot restaurant even houses original stadium seats from Ebbets Field for guests to appreciate. Familiar faces who frequent the restaurant include the likes of Obama, Spike Lee, and Diddy. 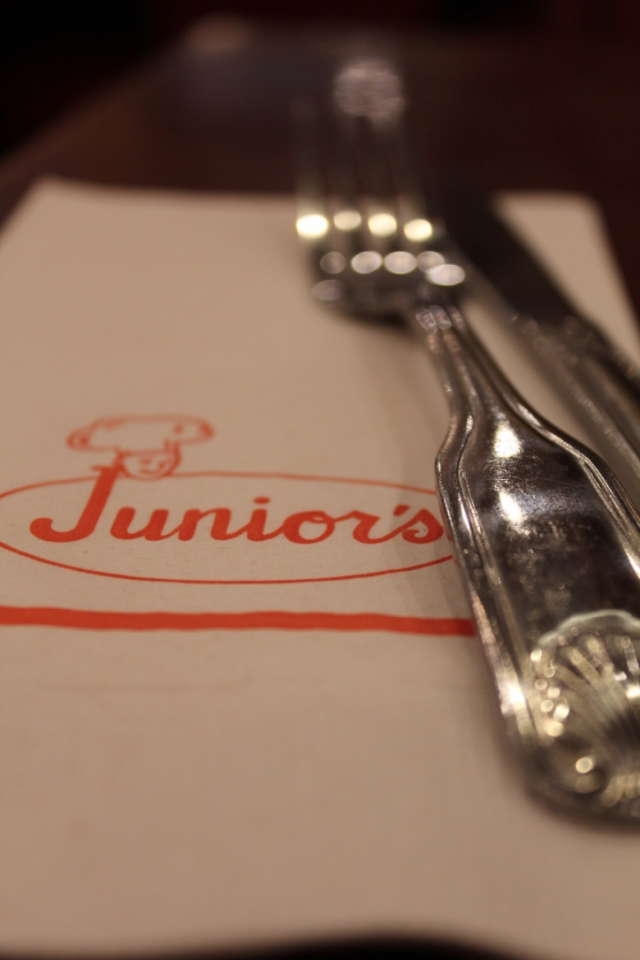