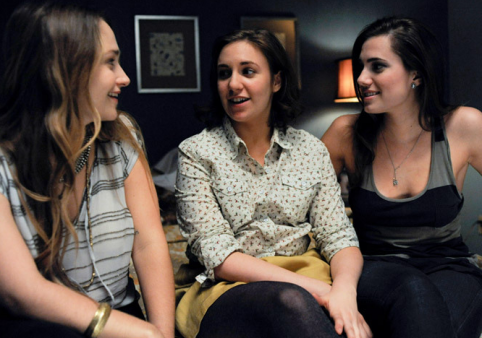 Either you really do believe Lena Dunham (center, above) is the voice of our generation, or you’re one of her peers who regards her with an “unstable blend of worship, envy, and disdain,” tuning in in case her show flops (against all media predictions); or in all sincerity, you’re banking on this one being the Great Brooklyn Hope after the disappointments of CBS’s 2 Broke Girls and MTV’s I Just Want My Pants Back, oh, and HBO’s last try with How to Make it in America. Whatever the reason, you’re determined to watch HBO’s Girls when it debuts Sunday, April 15, 10:30 E.S.T.  Ironically, the show that just might capture what it’s really like to be young, broke and hapless in BK, airs on a channel you can’t afford.

How are you going to make this happen? Many of us are already scheming to identify an ex-factor benefactor, like a friend’s rich older brother who rocks a screen projector in his Murray Hill frat house, or that “uncle,” AKA distant family friend you never had coffee with, who happens to own a 65-inch high def. How ‘bout that trustafarian you haven’t spoken to since college who you’re convinced must be hiding luxury Time Warner amenities inside his Bushwick slum?

Maybe these hook-ups are imaginary? You can always team up with your girlfriends and split HBO ($14.95 a month on top of whatever you already pay for cable), so every Sunday night, y’all can do potluck and 40 ounces and dress up like, well, yourselves for a self-referential slumber party. Gab about the show’s accuracies and inaccuracies, and relate your own horror stories of bad sex with Brooklyn deadbeats, fights with the ‘rents, and the week you only ate peanut butter because you didn’t have money for food.

And then there’s the sponging-off-of-your-parents solution. If they subscribe to HBO, you can snag their cable account number to stream the show on HBOgo.com. You can access HBOgo.com on a wide range of gadgets — depending on the account holder’s cable provider — including your iPad, iPhone, Android, Xbox360, Roku or Samsung Smart TV. If you own more than two of these, then maybe you shouldn’t be reading this article. The only downside is the show won’t be available to stream on HBO go until the next day, so you’ll have to selectively blindfold yourself  to the words Girls, Lena Dunham, HBO, and vagina, until you’re able to watch it.

Did we miss any other schemes for watching Girls? What’s yours?