I find that going to yoga is a lot like going to the post office: Sometimes you just can’t avoid it, but you know you’ll hate everyone involved.

After overhearing one too many conversations about juice cleanses while positioning my yoga mat – invariably next to a drop dead gorgeous Bendy-Wendy who warms up with effortless handstands, and contemplating murdering twosomes doing couples yoga whenever I see them tantric dry humping in the park (seriously guys, get a room), I thought maybe I was done with it. Even if I can’t deny there’s nothing like a good sweat and a good stretch, and an hour to allow yourself to just be…away from your smartphone, there’s just so much baggage. Or so I thought, until I found heavy metal yoga in the back of a Bushwick bar.

Upon arriving at The Cobra Club, I had to ask the bartender where the yoga class is held, which was a first. So was being at a bar holding a yoga mat. I thought about ordering a drink, but then realized “Drunk Yoga” could be a whole other subgenre for me to capitalize on, so I opted against it.

I waited by the dimly lit pool table for the instructor to arrive. A couple of girls got there shortly after me, it was their first time as well. I asked what had inspired them to try it, and it turned out they had simply seen a sign for the class at that same bar and thought, “we should exercise more.” So lesson learned, sports marketers: keep fitness classes in close proximity to booze at all times.

I didn’t know what to expect from heavy metal yoga. I’ve never been a metal head, although I did hang out with the goth crowd in high school. My concern was that it would turn out to be just as gimmicky as any other exercise fad, or that it would be trying too hard to be “The Anti Yoga.”

I had a feeling Saskia Thode was our instructor the second I saw her walk through the door, as she is no inconspicuous heavy metal yogi. She is tall and slender, she wears her blonde hair in a long braid, and she is covered in beautiful tattoos of crows and other animals and themes reminiscent of death. A far cry from your WASP turned faux buddhist who spent two weeks in Rishikesh and thinks this automatically makes her the expert on transcendence, Saskia is a badass from two hours north of Hamburg who bikes north of 60 miles a day and has been listening to metal since she was 8 years old. After class, she told me that old school Swedish death metal bands like Entombed top her list of favorite bands, along with Napalm Death, and Florida death metal.

As we positioned ourselves, she broke the ice by stating that her goal is to make this a fun yoga class, despite – and I quote – being German and having no sense of humor. She also explained that she is working on giving all the yoga poses metal names, and that this class would not involve “ohms” or any such bullshit. We would not be saluting the sun, Saskia said, but rather opening our hearts to Satan through physical worship. Hands in prayer would be substituted by hand-horns, and we were generally invited to embrace the darkness at all times. Though it was clear from the get go that we were expected to play along with the heavy metal antics, it was also implied that we were to do so lightheartedly.

We began the class with a typical “kneeling for chant with eyes closed” pose, but when the time came to loudly exhale we were instructed to think of our favorite heavy metal band and let out a loud growl. I barely had time to wrap my head around the concept when the entire room was filled with the gruesome and guttural sound of women releasing their inner Rammsteins and Danzigs. I decided to run with it, so I mustered up a decent snarl while thinking of Maria Bamford performing the Pterodactyl Song (because I don’t have a favorite heavy metal band). Between the growling, blushing and giggling to myself, I found this part to be very therapeutic.

The music started, and the class continued in a pretty standard fashion: We flowed through some poses, paid much attention to our breathing, stretched muscles we didn’t know we had and learned that we are terrible at balancing on one foot as we hold our hand-horns up to the sky.

The setting is small and intimate, which gives Saskia plenty of room to give her yogis individual attention (a nice change from your donation based, overcrowded vinyasa class anywhere in Williamsburg), and the heavy metal playing in the background makes the session feel more like a proper workout rather than naptime. For once I wasn’t told to “breathe into” that muscle that’s throbbing and aching as I stretch it so hard. Instead I found solace in the sound of a Swede screaming profanities into his microphone. He knows what true pain is, in fact he was probably in Half Bow as he recorded this song.

Perhaps it was Saskia’s genuineness and the fact that she doesn’t seem to take herself too seriously, or that we got to end the class by lying in the dark and imagine our corpses being enveloped by tree roots and repossessed by the earth. Either way, I decided I really like heavy metal yoga, and an hour and fifteen minutes after having growled in public for the first time, I found myself howling at an imaginary moon, feeling supple and relaxed.

Here’s the thing: When it comes down to it, Saskia’s class is your standard Vinyasa Flow. What sets it apart from the mainstream yoga scene, apart from future plans for a live death metal band performing in class, is the lack of pressure to simply “let go” or “exhale” all of your problems away, somehow immediately achieving stillness of mind. It felt good to indulge in a pigeon stretch while I simultaneously channeled my anger and embraced my demons.

Heavy Metal Yoga is held at The Cobra Club and St. Vitus Bar. You can drop in for $13, or speak to Saskia about purchasing a class card. Follow the Metal Yoga Bones Facebook page for classes and events.

This article was originally published in 2016. 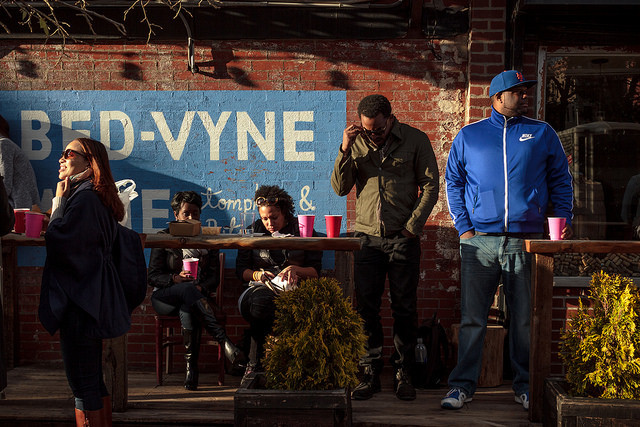 Feast your eyes, ears and taste buds on Bed-Stuy businesses at this annual foodie crawl

The weather is finally cooling down, which means it’s out with the jorts and in with the jackets. Mmm, sweata weatha. ‘Tis the […]