Harry’s back! Sort of! The first official new Harry Potter story after the original septology comes out at midnight July 30. It’s a script based on the new Harry Potter and the Cursed Child play that’s opening in London at the same time. The play is basically the UK’s Hamilton, in that you stand no chance of getting tickets ever, so your best bet is to get the book. The plot has mostly been kept under wraps, and fans are nervous that J.K. Rowling is bordering on George Lucas levels of meddling with her own canon (the book is actually credited to three authors:  Rowling, Jack Thorne and John Tiffany).

But if nothing else, the release brings back the great Harry Potter tradition of midnight release parties. These are truly joyful affairs — when was the last time you’ve seen so many kids and people of all ages lined up at midnight to get their hands on a BOOK? You wait in line for a lot dumber things, New York. So here’s where to find the midnight releases and other parties in Brooklyn — start practicing your butterbeer pong skills now.

Note: You should pre-order your books at any of these events to ensure you can get one. 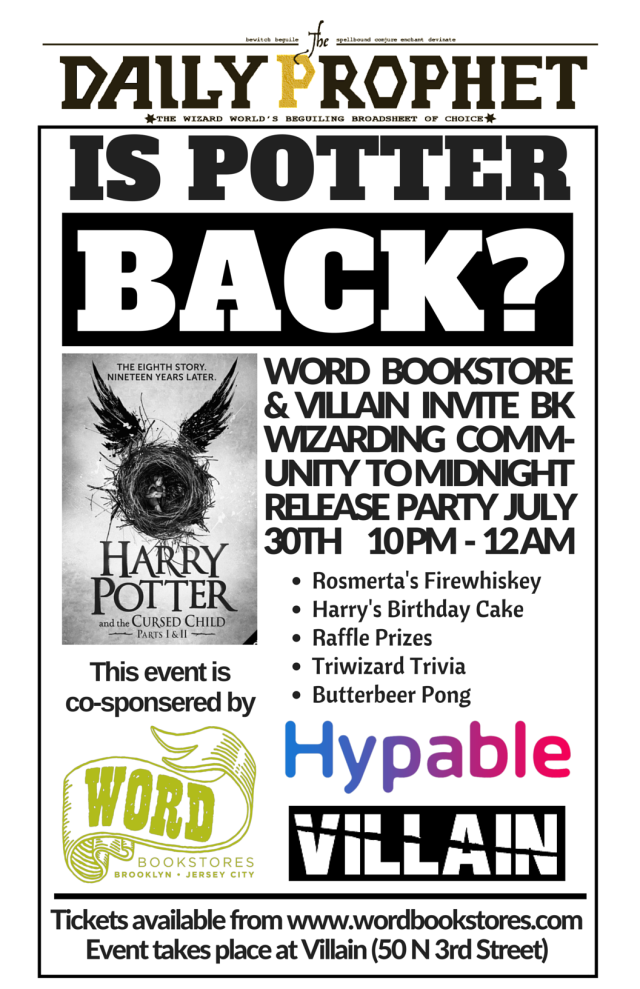 This all-ages party is probably the one that will appeal to seventh years and beyond (aka adults). The party, held at Williamsburg event space Villain, will feature firewhiskey, birthday cake for Harry’s bday, trivia, raffle prizes and — something that either sounds magically delicious or fiendishly terrible — butterbeer pong.

This isn’t a midnight release, but PowerHouse will be holding a party during the day the book comes out with crafts, activities, treats and giveaways. RSVPs requested.

The whimsical little store will be serving up sherbet lemons, cauldron cakes, chocolate (in case you’re being chased by Dementors) and beer and/or butterbeer, “for those attempting to forget their cursed childhoods.” Plus, get sorted, wield wands and time-turners, and take part in cursed-childhood collage and Harry Potter trivia.

Yeah, B&N is a chain but for those of us who lived in bookstore deserts when Harry Potter books were being released, it was our only option. The stores’ parties will feature a special Muggle Wall where customers can share their favorite memories of Harry Potter, plus giveaways and fun activities.

The Bay Ridge shop will be service treats, games and prizes starting one hour before midnight.

You’ll have to cross into the city to go to this party, but with the Strand and its miles and miles of books carrying a very distinct Hogwarts vibe, it felt only right to include it. The store will do trivia with prizes, a photo booth, treats from the Fat Witch. Costumes encouraged.

Once you’ve got your copy of the book, hop on the train and head down to Coney Island, where the Cyclones are throwing a Harry Potter Night. The event features a pre-game Quidditch match starting at 2:45pm. Bonus: This is the same day as Wilmer Flores “tears to cheers” bobblehead night, because everyone knows Flores is magic.

Note: We checked and Greenlight bookstore in Fort Greene is not doing any special events.

Did we miss anyone? Let us know in the comments!