Looking at the internet lately has been like wearing a little doggie shock collar while you have the stomach flu. If you’re feeling similarly, it’s time to shut down the digital blitz and do something in the dark: Go to a play. Better yet, go to a Tribal Love Rock musical. Hair: The American Tribal Love Rock Musical opened on Friday and runs through Feb. 19 at The Heights Players theater in Brooklyn Heights. It has an important message for us as we step into each day of our strange new world: the resistance can be fun. Hair reminds us that every good revolution needs dancing, joy, a few joints and rock music. It is dark up ahead, but we gotta let the sun shine in.

The Heights Players are Brooklyn’s oldest self-sustaining community theater. Now celebrating their 60th season, the Heights makes its home in a church-turned-basement theater on a quiet street in Brooklyn Heights, just a few blocks from New York Harbor. Not only does the Heights turn out high-quality theater, season after season, it is a beautiful example of grassroots community organizing. The Heights is a theater of the people, by the people, for the people, and man could we use some of that right now. It’s the 50th anniversary of the show’s debut, and while the hippie musical has remained a perma-fave of the ’60s free lovin’ art genre, in 2017 it feels more than nostalgic: it feels necessary.

“The world needs Hair right now as a reminder of how free and how vocal people were about these issues,” actress Marley Nykole (who plays Abe Lincoln) told Brokelyn. “Go out and shout for what you believe in.”

While The Heights has produced political plays in the past (Frost/Nixon, Sunrise at Campobello, Fiorello), the rock musical Hair is a notably groovy and provocative departure from the norm. Set in the late 1960s against the shadow of the Vietnam war, Hair follows a tribe of youthful, free-spirited hippies who hang out in a park in NYC’s East Village. They’re trying out a particular vision of utopia where they can “be free, no guilt, be whoever you are.” They preach peace and love in opposition to a government that wants to send them to war. They grow their hair long in defiance of their “organization man” fathers. They burn their draft cards. They sing “Let the Sun Shine In,” and you should sing it too.

The original production of Hair premiered at The Public in 1967, then opened on Broadway at the Biltmore Theatre the following year. It became an anthem for the anti-war, counterculture movement. Although it’s hard to separate Hair from its 1960s setting, the show continues to resonate with contemporary audiences and their politics. It was revived on Broadway in 2009 and 2011 to enthusiastic reception. Given what’s gone down in the past few weeks of American government, we may need this show now more than ever.

“History repeats itself,” director Michael Kidney said. “This is the 50th anniversary of Hair’s premier at the Public. So 50 years ago, the generation on stage was going through what our generation is going through today. But the show is a reminder that if you open your mouth and fight injustice, you can make things change.” 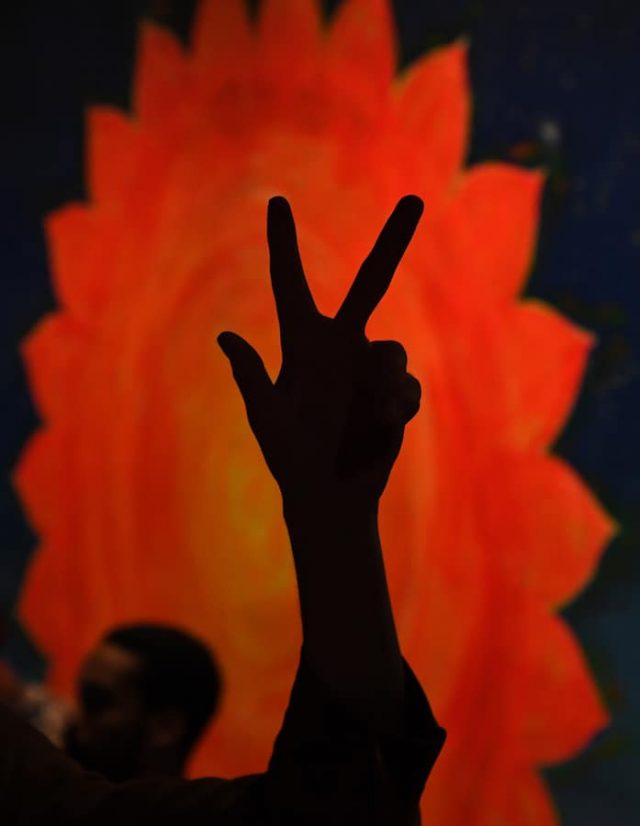 Hair provides the ideal mix of socially relevant entertainment while also giving us a break from our smartphones, which is something we all definitely need these days. In a recent interview about a new play opening at the Signature Center, actress Jill Eikenberry spoke of how important it is for people to attend plays right now, saying “They need collective experience.”

When dark times settle in, spending time together IRL is crucial to resisting the scrambling effects of fear and facts, both real and alternative. It’s in those moments of screen-free darkness that we can pause and seek out other sources of light – the light in ourselves, the light in our friends, the light on the stage.

Actor Kristoffer Pendergraft (George Berger, the leader of the hippies) agreed that the show is timely.

“Hair discusses human issues, not generational issues,” he said. “It’s not specifically about Vietnam, it’s about the fact that people, men, humans, have been killing each other over disputes since we’ve been in existence.”

For Karen Mascolo (Melody/the Tribe), the struggle Hair depicts is nothing new to theater, nor to mankind. She explains that her character sings a song that includes Shakespearean verse, one of which is Hamlet’s ‘what a piece of work is a man.’ ”

Actor Tony Artiga (Tribe) says that the renewed relevance of the play is proof that “progress is messy. The way you fight matters but you have to fight for these fundamental human rights.”

For the cast and crew, this show will be indelibly marked by the moment in which they are making it, regardless of whether it deals directly with the present. For them, coming into the rehearsal space each day has been inspiring and cathartic. Actress Michela Imbesi (Tribe) says that doing Hair has been therapeutic.

“I’ve been so exhausted and upset through this entire election cycle, and [Hair] is helping me to work things out,” Imbesi said. “For the first time ever I’m thinking about how can I get involved. I’m ready to be a leader because of this show.”

For dancer Masimo Iwai (Tribe) the show has inspired a heightened appreciation for everyday life.

“When I started rehearsing, I got emotional about everything, interested in everything. When I go outside in the morning I go ‘oh what a nice day!’ when I go to bed I say ‘thank you for this day.’”

Nyoke adds that daily rehearsals are the place where she can get noisy about the stuff she’s shushed for in polite company.

“In rehearsal space you can be as loud as you want.”

For Mascolo, “This show gives me hope. We’ve been in a situation similar to this, and we’ve come out of it. This is a pretty dark time, for a lot of people, and I’m really hoping that the light is brighter at the end of this.”