As the sharing economy stretches its capitalist roots deeper and deeper into our lives, the Bradburian dystopia of many startups becomes harder and harder to remember. There are the apps and technological developments which fill a void, bringing efficiency to a place where there weren’t many options – those electronic dog houses, for example. The alternative for those few pooches who are now being stowed in the temperature-controlled high-tech cages was being tied to a wall or left at home. Paying people back over Venmo is convenient when you don’t have cash, and comes as an alternative to owing people money, paying them back when you do have cash, or using your bank’s difficult to use app to do the exact same thing. Uber, Lyft, TaskRabbit and other sharing economy apps provide alternatives to developed, established modes of transit – the taxi, the bus, the subway, your car – and basic household chores in a way that provides increased efficiency at both a literal cost and a mandatory lifestyle shift, however slight. There’s nothing inherently wrong with increased efficiency, but there is something wrong with attempting to replace mom and pop stores with a whitewashed pantry box appropriating the name of the thing they directly aim to supplant.

“Bodega” is a startup by former Google employees Paul McDonald and Ashwait Rajan which consists of eight shelves in an unmanned box sporting a bodega cat logo which is capable of being stocked with whatever algorithmic necessities your homogenous apartment building, NYU dorm, or Equinox are determined to be most likely to purchase. You can get the goods through what else but an app which lets you unlock the box, take your selected form of hydrogenated vegetable oil or sulfate, and leave, without ever having to interact with another human being, Fast Company reports. “Computer vision” will ensure you are a good little capitalist and take only what you paid for (the app will charge your credit card), and the whole interaction will centralize your shopping and save you so many annoying walks to your local corner store so you can get back to working faster. “Eventually, centralized shopping locations won’t be necessary, because there will be 100,000 Bodegas spread out, with one always 100 feet away from you,” McDonald told Fast Company, going on to explain how studying community’s (read: residents of the same apartment building), “relatively homogenous…buying behavior,” allows for customized Bodegas better equipped to serve.

If Bodega had been marketed as The Modern Vending Machine, or Box O’ Stuff – really anything that promoted its existence as a mini, manless convenience store instead of borrowing the name of a beloved New York institution plenty of Americans have never heard of, it’s possible if not likely that no local news outlet would’ve covered this story. Without the name and logo, the displacement of bodegas and mom and pop stores that may well directly result from this type of technology would not be nearly as clear. Because sure, a majority of bodega merchandise is the type of nonperishable goods that can be stocked in a Bodega, but they can’t sell the perishable stuff (there’s a special place in hell for whoever makes a Chopped Cheese app), and they’re gonna have to go through a hell of a lot of licensing to ever sell cigarettes, lottery tickets or beer. The connection would not be that obvious – vending machines essentially do the same thing, except they’re retro – except that McDonald and Rajan had to hit us over the head with it. Another problem with this startup lies in the fact that it is telling us the non-time efficient but experientially rich detours shopping in person offers you are a waste of your precious time – but what kind of stories are gonna come out of people simply visiting a virtual Bodega? Shopping for groceries with his parents, my friend Eli was once blessed with asparagus by Allen Ginsberg in a Lower East Side bodega; my girl Nora was known as the Four Loko Queen of the Upper West Side by many a bodega owner for years in the early oughts, a title she recalls with honor; I’ve seen people have their day’s rejuvenated by petting a purring bodega cat.

The worst part about this niu Bodega and all the wonderful, nuanced cultural aspects it’ll potentially render archaic and all the mom and pop stores it may or may not put out of business is that people are totally going to read articles like these abhorring it and still decide to buy their Takis from a machine instead of their neighbor.

Please keep your tone deaf startups to yourselves.

If you run a business, pay for a dang premium music service already

Commercials are the bed bugs of capitalism and a terrible trend is letting them loose on unsuspecting New Yorkers: businesses that refuse to pay for a streaming music account. This needs to end. 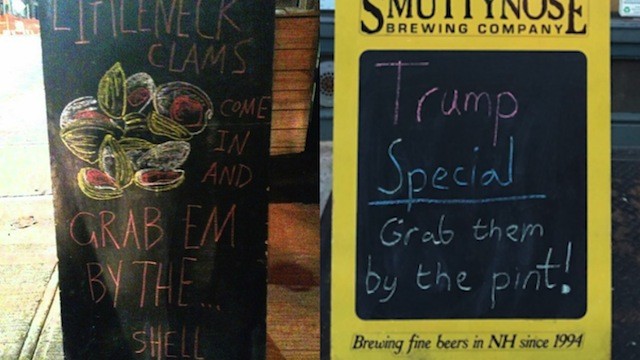 If you don’t hate women, cool it with the ‘grab her by the’ anything jokes

Hey Brooklyn, we (women) get it. President-elect Donald Trump says dumb things. So dumb, in fact, that within seconds of saying them the […]