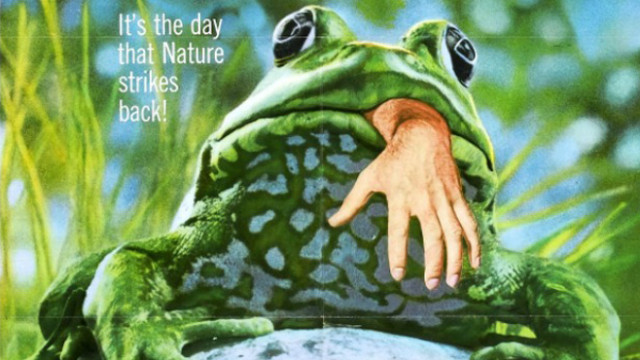 1. Bid a sad farewell to Proteus Gowanus, the latest in an endless series of losses for alternative spaces in Bk. (Friday, FREE)

4. Stomp your feet at the Classon Social Club to accordion gypsy root music from the Amigos Band. (Friday, $8)

5. Strut your stuff at the Xanadude dance party in the Panther Room, with DJs Sean B., Deputy, and Eli Escobar. (Friday, $15)

6. If you think an island full of dinosaurs is scary, head to Nitehawk’s midnight screening of Frogs for (much campier) island terror. (Friday, $11)

9. Get to know the history of a new hood at the [re]Explore East New York trolley tour. (Saturday, FREE)

12. Indulge in some guilt-free gorging at the Beat the Heat Vegan Shop-Up. (Saturday, FREE)

15. Who would have ever thought to put booze and sexytime together? Head to Babeland Bk for Sex Tips & Shakes, featuring boozy milkshakes by Magnum Cream Liqueur. (Saturday, FREE)

16. Get really retro at Green-Wood Cemetery, which will be transformed into a 19th-century pleasure garden and theatre to honor resident William Niblo, whose Manhattan theater-garden was “the Radio City Music Hall of its day.” (Saturday, $37)

17. Hopefully they will let you have a seat at the Stand & Deliver comedy show, featuring Mark Reiss, Neil Constantine, Calvin Cato, and more. (Saturday, FREE)

18. Give in to ’90s nostalgia at the Salute Your Queer Shorts party, with music from My So Called Band, Freya Wilcox & the Howl, the Meltaways, and more. (Saturday, $7)

19. Join up with the other mass romantics to go see the bleeding heart show that is the New Pornographers at Celebrate Brooklyn. (Saturday, FREE)

20. Go back in time with Cezar Del Valle, who will discuss his new book on the theatrical history of Coney Island. (Sunday, FREE)

27. Gather up your spoons and head to the Silent Barn, where Title: Point will grace you with a live performance of The Room. (Sunday, FREE)