Trailer: “Katrina/Sandy” from Land of Opportunity on Vimeo.

We’re mostly likely doomed to live in a world of terrible hurricanes from now until the Earth wipes us away forever. For the time being though, the two most well-known modern hurricanes to have ruined us are Sandy and Katrina, which despite being a few years apart, changed the landscapes of New York and New Orleans forever. Now, filmmakers from New Orleans-based Land of Opportunity (who made the interactive Fulton Mall clip from My Brooklyn) and New York-based SandyStory are putting out an interactive documentary, Katrina/Sandy examining the damage Katrina and Sandy did, side-by-side. You’ll get stories from kids in New Orleans and elderly folks in Coney Island, and plenty of destruction imagery from both cities, which still feels a little traumatic a couple years later. The full documentary comes out on Tuesday, August 26, the ninth anniversary of Katrina, so look for it of you want to watch something really depressing. 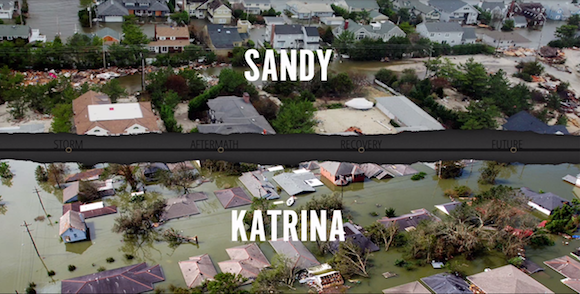