There were already people queuing up foe entry to The Cat’s Meow when we arrived, at 11am on the morning of its grand opening this past Saturday. It was quite the fee line, with everyone waiting to pony up their $5 for half an hour of playtime with some twenty furry creatures inside the space. Some folks had even made reservations. But regardless of walk-up or appointment, everyone donned labels with a time stamp indicating when they’d first come in.

For our part, we chatted, petted, and got some pretty adorable pictures of the whole affair. While the borough’s first-ever cat café is certainly not the best of its kind, it succeeds as an adoption initiative and a space for cuddling—and that’s something we can get behind. So, with that said, here’s our rundown of The Cat’s Meow (354 Myrtle Avenue).

The vestibule of the café is made of wire mesh, to prevent kitty-cats from wandering outside (visitors were nonetheless cautioned to open the door slowly as they entered). The space itself is open and airy, with a sparse information table at the front and lounge space/merchandise at the back.

Truth be told, there’s not much to the place besides the cats and their accessories. While visitors are welcome to bring in coffee and pastries from Red Lantern Bicycles (345 Myrtle Avenue) and Brooklyn Sweet Spot (366 Myrtle Avenue), there’s nothing by way of café machinery inside the space itself. There’s just a modest—and largely unappetizing—array of packaged snacks on a table at the back.

But you didn’t come here to read about the snack table, did you? You came because you wanted to see the cats. Well, don’t worry. The cats were there, too. 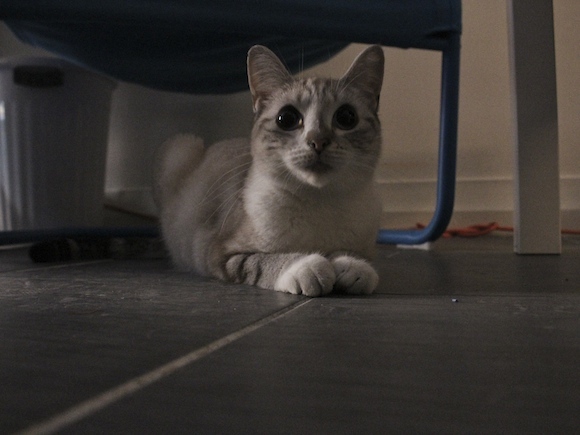 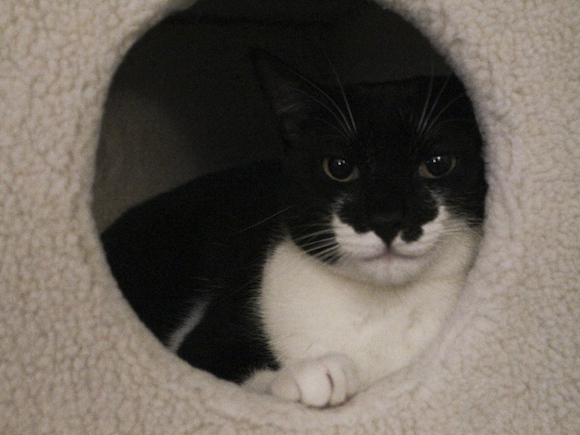 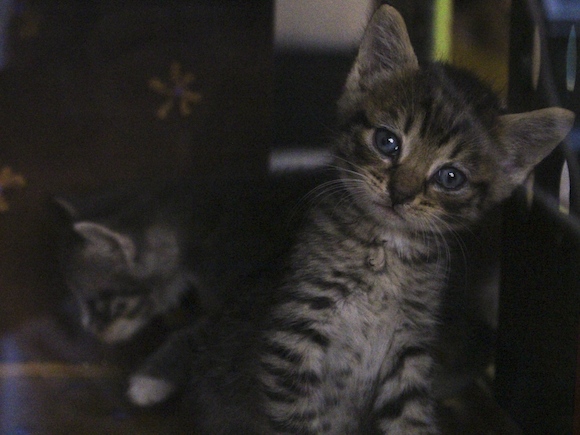 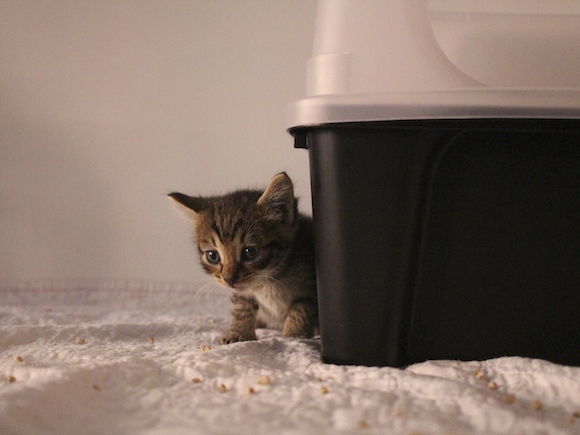 Yep, there really were cats everywhere. Running around the shop, lording over everything atop carpet towers, tucked into crannies between furniture—and of course, in folks’ loving arms.

“I just came for the experience,” Susan (pictured above) told us. “I already have two cats at home.”

Susan was easily the event’s unofficially mascot, touting her tabby-savvy to anyone who would listen. She lives just two blocks from the café. She’d first heard about The Cat’s Meow from a friend, who simply said to her, Oh, you’ll like this.

Clearly, Susan wasn’t disappointed. In fact, she hung around as long as we did, making observations about each cat as it passed from hand to hand. The café staff were just as eccentric. One attendant puttered about, talking to each of the cats in a high-pitched voice and keeping them animated. (Dare I say he was their fluffer?)

Oh, and there was also this token adorable toddler, who just ran after all the animals with her genuine, wide-eyed wonderment. She came and sat next to me while I was holding a kitten, watched me quietly, then asked, “Can I have that after you?”

In the front of the shop, there’s also a large glass case (with a mesh top, obviously) housing a mother and her tiny, week-old kittens. That’s the real breath-taker, because those things could easily fit in the palm of your hand. They’re so tiny.

They look innocent enough, and they are, but the matriarch is imposing enough to ward off predators and yuppies alike. She never stirred from her post inside the house, giving face that would make Beyoncé blush to anyone who peered inside the case.

Despite mama cat’s imposing “manor,” the dollhouse remained the central attraction of the space. After all, who can resist tiny, roly-poly balls of fur?

Eventually, you do get your fill. Because like we said, it’s a couple dozen cats and a pretty low storefront concept. They have free wi-fi, but it’s not a place to sit and get your work done, since $5 only buys you half an hour of time inside the space. But like most transient ‘happenings’ in Brooklyn, it’s worth checking out once before it’s gone.

ICYMI in last week’s post, here’s what you should know about it:

1. All of the cats, save for the nursing mother and her offspring, are adoptable. For the low price of $100, you can take home a new furry friend. You can also put in an application for any of the nursing kittens (they can be adopted out once they reach 12 weeks of age).

3. If you like what you see but you can’t take one home, consider volunteering as a foster owner, or just lending your time to worthwhile rescue organizations like Sean Casey and the BARC Shelter. The perks are as fluffy as you’ve seen in the above photos, and the karma is even better.