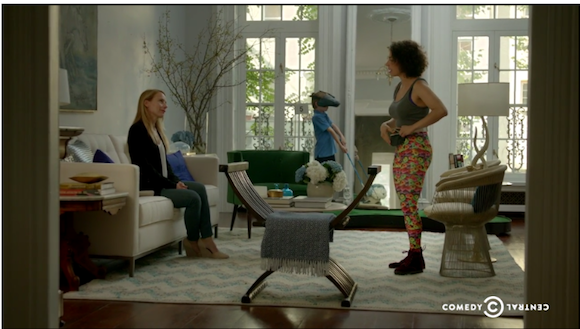 Ilana Wexler: libertine, pothead, feminist, molder of young minds….Huh? In Episode 8, we see Ilana as the babysitter of a precocious, privileged boy Oliver, whose refined Manhattan mother (played by Amy Ryan) finds Ilana charmingly bohemian. She’s doing it for extra cash, right? Why else does anyone babysit?

Maybe, but Ilana has another objective: “Oliver is at a tipping point. If I don’t step in now, he could go to Yale, and then, Yale Law, and then kill a stripper and settle out in court….If I don’t do something, he could turn into another useless, rich old white man.” In her dealings with Oliver, Ilana is nothing if not a focused, systematic, purposeful leader of youth. But what kind of lessons are there to learn at the Ilana Wexler School of Parenting?

Lesson no. 1: “The four R’s, my friend: Reduce, Reuse, Recycle, Rihanna!” At the coffee shop, Ilana shows Oliver the importance of bringing your own cup.

Lesson no. 2: Act like a kid! When Oliver meets Abby, he extends his hand to shake hers, saying, “Nice to meet you Abby, I’ve heard so much about you.” Ilana shuts it down: “What are you, on the campaign trail? Oliver, you’re a child. Give her a full-bodied hug and mean it.”

Lesson no. 3: Welcome to the underground, bitch. Oliver: “I never ride the subway. I usually just Uber.” Ilana reprimands him: “Oliver, we don’t talk about Uber down here. Let’s play a game: I want you to look around and find the most disadvantaged person here and then we’ll give them our seats. Who do you think it is? It’s you, Oliver; you’re rich in money but poor in experience.”

Lesson no. 4: Learn the plight of womankind. At Beacon’s Closet, Ilana has Oliver try on blue pumps and walk around in them. “It doesn’t feel too good, does it? But honestly your legs look amazing.”

Oliver’s first report card: A+  Oliver convinces his mom to give Ilana her old clothes so she can “donate” them for her. When Ilana complains, he says, “No, you bobo, my mom’s stuff is fancy as fuck. Take it back to Beacon’s and sell the shit out of it.” Ilana beams with pride, saying, “The student has become the teacher!” Oliver dances away, chanting, “Yas queen, Yas queen,” Ilana’s eyes fill with tears.

‘Broad City’ Brokester tip of the week: Forge a semi-professional relationship with an older, wealthy woman who will find you charming and bohemian and hook you up with fine things. Bonus: save her son from a life of white collar ennui.