What Brooklynites really need, now more than ever, is not more money, is not more soda, is not a faster ride on the G train. What Brooklynites really need is a TV show telling us how a group of girls in their mid-20s are living in Brooklyn after college. Right? Right? Gallery Girls is the latest effort by Bravo to use a bunch of white girls to create a totally relatable narrative about New York City to be marketed to a bunch of people who can’t afford cable. The show, which premiers tonight at 10pm, follows a flock of indistinguishable young females as they attempt to navigate the art world, which appears to be a terrible thing to ever be involved in. And although they’re struggling to land internships and pay rent just like the rest of us, the show is relatable in one very definitive way: we all hate rich girls.

A Manhattan vs. Brooklyn death match?
Gallery Girls follows seven budding gallerinas as they try to make it in the “cut-throat, fashionable” art scene in Manhattan. There’s a vague Manhattan-Brooklyn rivalry among the characters, chiefly around money. From Manhattan, we meet Liz with the art collector father and Maggie with the trust fund. These two who go to battle for an unpaid 30-day internship in the gallery of Eli Klein, a collector of Asian art who looks like a penguin and acts douchey. The story line is familiar: kids whose parents have money can afford to work for free while the rest of us are working in restaurants.

The Brooklyn girls — Chantal, Claudia and Laura — come from slightly humbler beginnings. Something about growing up on a farm or not fitting in with classmates in the midwest. Like all good Brooklyn transplants, they are supporting themselves and are feeling very self-righteous about it, and would like to remind you that it’s very hard to do that here in this big city.

The episode also includes muscular boyfriends, vague romantic subplots with aforementioned douchey penguin as well as an Australian photographer, PASTIES and two gallery openings, because, according to Chantal, the art world is “so crazy” that there are parties approximately, “like, every week.”

“I don’t know, because they’re from Brooklyn.”
Is there any redeeming content to the show? Well, sort of. About 2/3 of the way in, Maggie, the trust fund Manhattan girl, guides us into a sepia-toned flashback of a party she attended in an attempt to make nice with the Brooklyn girls. Maggie reveals that the party was totally un-noteworthy, except for one thing: slap shots. While the more naive among us may have expected a segue into a fun, boozy air hockey game, we are instead introduced what is perhaps the bitchiest way to get drunk ever.

The rules are simple: Someone takes a shot, and you slap them across the face. It would be safe to venture a guess that Chantal and Claudia do not actually regularly play this game, and in fact that they have manufactured it solely for the purpose of slapping Maggie across the face, but still, a girl can’t help but be intrigued. When Liz reacts to the story with horror and asks why they would do such a thing, Maggie brings us to one of the only genuinely entertaining moments of the show and shouts, “I don’t know, because they’re from BROOKLYN.” 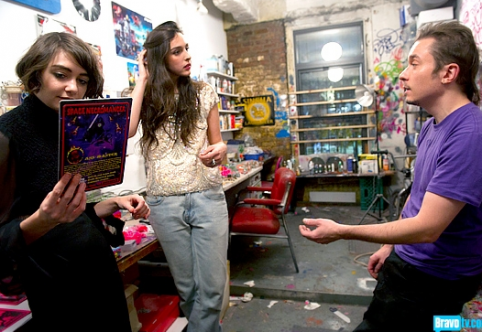 The episode closes on a note that we actually can all relate to: getting too drunk at your own party and telling everyone who’s left how much you love them before kicking the willowy all-girl band out of your gallery, putting on a veil, and collapsing into a small heap of money. Well, maybe just the first part.

If you’ve seen one reality show, you’ve seen Gallery Girls, except instead of the Jersey Shore or Bay Ridge or the fashion world, this one takes place in an art scene that just doesn’t seem all that interesting, at least in the first epsiode. The only real reason to watch it is if you’re recapping it for a blog, in which case, we’d like to suggest you take a few slap shots first.