Rape whistles have long been mocked for their purported function. Not only are 82 percent of sexual assaults perpetrated by someone known to or trusted by the victim, but generally speaking, by the time an attacker comes into view of someone who has a rape whistle, the time for defensive action has probably passed. So as a cautionary tool, it’s kind of useless. On the other hand, you can make some pretty beautiful music with it.

That was precisely the goal for the girls of Jess Delfino’s Rape Whistle Choir of America, who convened on the steps of City Hall today to send a very direct message to the mayor’s office: rape blows!

There were only a handful of people in attendance, counting myself (which also explains why there weren’t any cops around for crowd control). 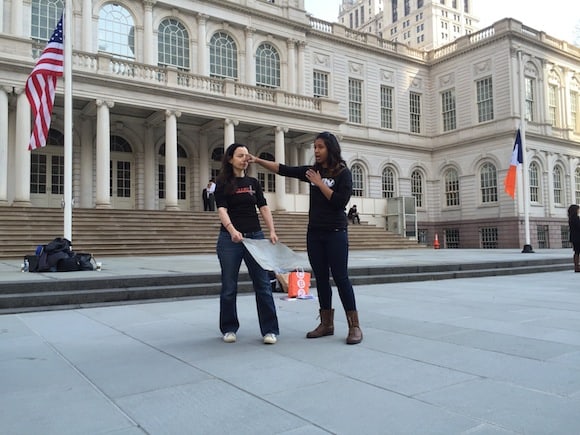 Before performing, Delfino introduced two instructors from Chinese Hawaiian Kenpo Academy,who did self-defense demonstrations. They discussed the most vulnerable parts of a person to attack — bridge of nose, lower mandible, sternum, testicles — as well as other safety tips to keep in the forefront of one’s mind. (FYI, you can always drop in to one of CHKA’s free self-defense classes offered for women every Tuesday night 7-8:30pm.)

The choir then handed out their complimentary rape whistles and songbooks and performed three of their tunes, welcoming audience participation. The repertoire began with “I Just Called to Say Don’t Rape Me”; then “Don’t Rape Me 2” (set to the tune of “Hot Cross Buns)” and concluding with “Don’t Rape Me 1,” an original written by Delfino herself.

I might have been the only person trying to participate. Everyone else was watching quietly and the performance as a whole lasted only about five minutes. Still, there was a fun moment when a group of girls were leaving the courthouse and Delfino threw them whistles. The girls had no idea what was going on, but they whistled as they walked away. So, a little progress? 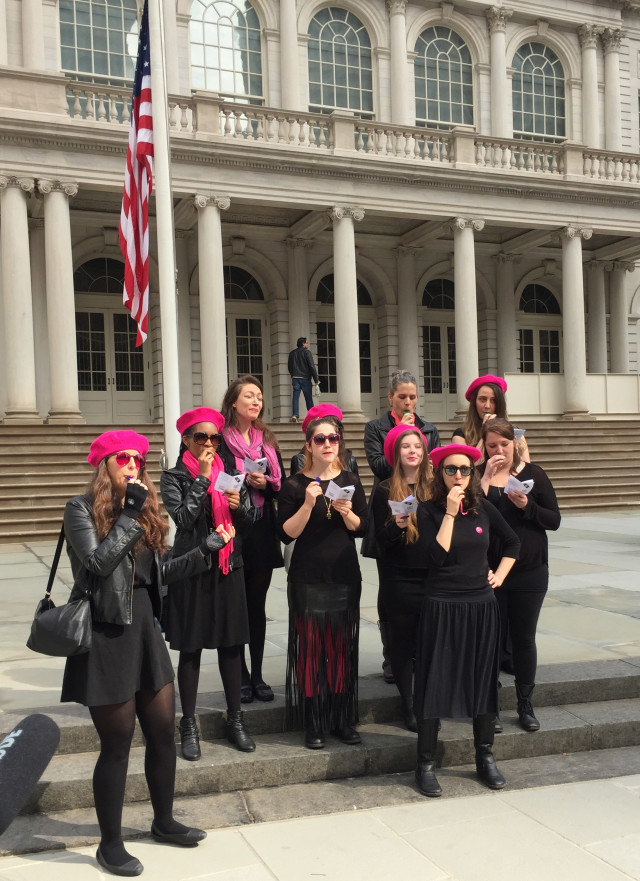 It certainly feels strange to call a rape awareness event “fun,” and the facts of rape remain glaringly unfunny. But today’s choir was evidence that efforts to abolish terrible things don’t have to be morbid and dreary to be effective. See the good vibes for yourself with video of the choir’s performance.

There’s no telling whether The Rape Whistle Choir of America’s performance today on the City Hall steps foreshadows the war on rape Delfino is hoping for, but a good time was had by all who attended — myself included — and a few women walked away whistling on a sunny afternoon.