It feels like we’ve been waiting for the bike-share program to start for ten years, when really it’s only been a year. And we wouldn’t have been waiting much longer if it weren’t for that stupid goddamn hurricane. But now the word is out that the program will FINALLY roll out in May, which is a perfectly good time for a bike ride. And we also know which stations are slated to be open when the program launches too. 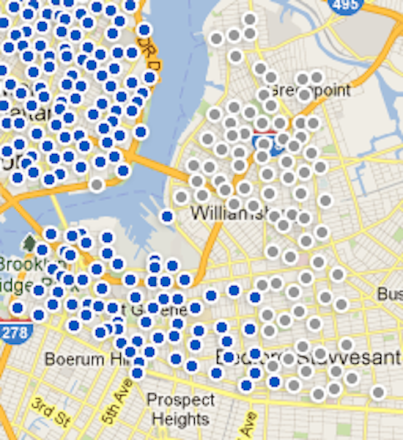 So it doesn’t have a key or anything, but according to StreetsBlog, the blue dots represent stations that will be open with the initial rollout in May, while the gray dots represent stations that will start hosting bikes as 2013 rolls along. The DOT map is an actual, interactive GoogleMap that you can play with here, but our screenshot at least has all the planned Brooklyn stations. And while north Brooklyn is getting the short end of the stick here, it’s populated exclusively by hipsters riding fixies, so they don’t need it anyway, amirite? But, People of downtown and central Brooklyn, have you seen any of the stations going up?